BMW has been spotted test driving a prototype version of the upcoming BMW M2 high-performance coupe at the Nurburgring. We all knew it would be quick but boy does it look fast and well-mannered on the track. 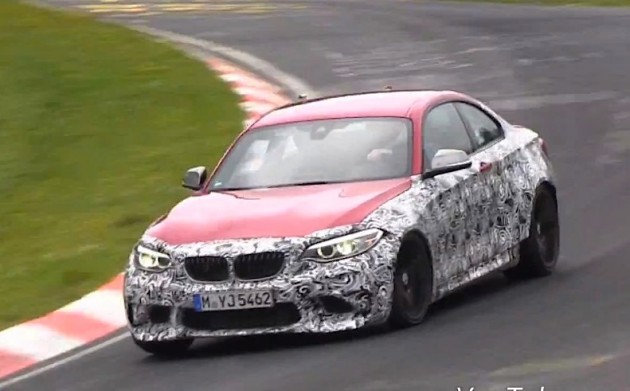 The BMW M2 will sit beneath the M3 and M4 in the proper M car lineup. It will also sit above the M235i, which is essentially a 2 Series that has been tweaked and enhanced by M division.

For the M2, this will be a more bespoke vehicle using unique, heavy-duty components. The suspension, differential, brakes, and some of the chassis is amped up and strengthened to cater for a higher level of performance driving, while the body, as you can see, is slightly pumped for a more muscular look.

Details on the engine and specs are yet to be announced, however, it’s understood the engine will be a 3.0-litre twin-turbo inline six like what is seen in the M235i and the M3 and M4.

With the 1 Series coupe no longer around, being replaced by the 2 Series, the new M2 is set to be the successor to the old 1 Series M Coupe. The M Coupe was a completely unique model designed and developed by M division.

Aside from the mechanical stuff, the M2 is expected to come with a plush yet sporty interior setting, with buckets seats, loads of M-labelled trimmings and controls, and special M buttons and driving modes.

Take a look at the video below, provided by cvdzijden YouTube channel, for a quick preview.