The Lotus F1 team and its major sponsor EMC have teamed up for a world record-breaking new marketing campaign which involves a Renault truck jumping over a moving F1 car. That’s right. 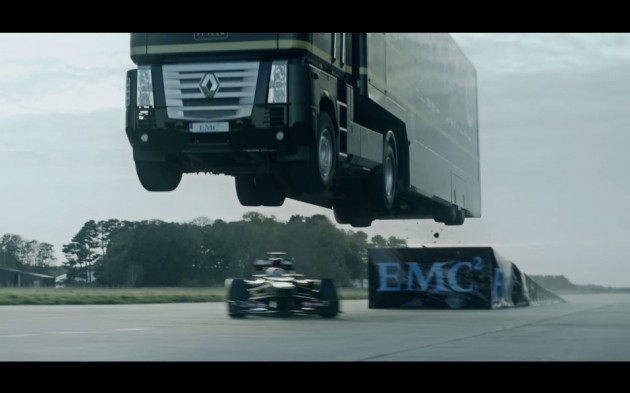 In a short clip released online, a Renault semi trailer has set a new world record for the longest jump made in a truck, in one of the more daring publicity stunts in recent memory.

British stuntman Mike Ryan piloted the semi-trailer, soaring through the air and covering 83 feet, or just over 25 meters. Not only that, but he managed to do it whilst airing over a Lotus F1 car.

Russian stuntman, Martin Ivanov who has worked on the Bourne films, was at the helm of the F1 car, which veered sharply under the truck as it took to the air, passing successfully with no accidents or injuries.

You can see the truck takes a rather hard landing, bottoming out the suspension which caused some body trimmings to break off. Other than that, it looks like it went smoothly. Take a look below.