Suzuki Jimny 5-door in the works for Indian market – report

If you love the idea of the new Suzuki Jimny but you’re afraid it’s too small for your needs, we have some good news. There is a new 5-door version in the works, a report has revealed. 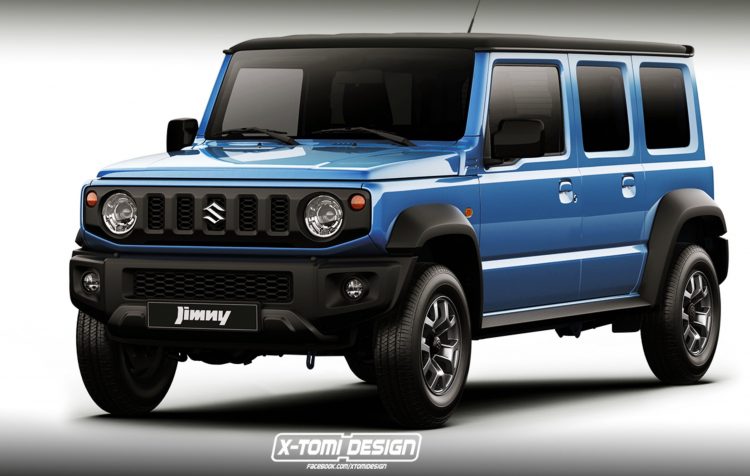 Unfortunately, it looks set for the Indian market only this stage. According to a recent Autocar India report, Maruti Suzuki (the Indian division) is currently developing a new five-door model for its local market. It’s set to follow the introduction of the current three-door model there a bit later this year.

It’s understood the five-door model will be pretty much the same as the current model in terms of the design, mechanical philosophy, and plucky, go-anywhere attitude. However, the ladder-type chassis is set to be stretched to accommodate two rear doors. A digital rendering by X-Tomi Design gives us an example on how it might look.

With the extra doors the cabin space is set to be larger, with more rear legroom and of course easier ingress and egress. Boot space will probably grow a little bit considering the three-door version only presents 85 litres with all four seats in place.

Live axle suspension front and rear are set to remain, with part-time four-wheel drive running gear and a dual-range transfer case to ensure rugged off-road performance. Similar ground clearance is likely – currently rated at 210mm – however, the break-over angle will obviously be reduced due to the longer wheelbase. Front and rear overhangs are not expected to change.

The report says the Suzuki Jimny 5-door will go into production at the Maruti plant in Gujarat late this year, and there is set to be “export” markets for the model. No details outlining these specific markets have been mentioned. Let’s hope more and more body styles for the popular compact SUV are introduced in Australia, including that awesome Jimny ute we saw from New Zealand.