Porsche is launching a special, more powerful version of the 911 Turbo S, called the Exclusive Series. It comes in as the most powerful 911 ever offered from the showroom. 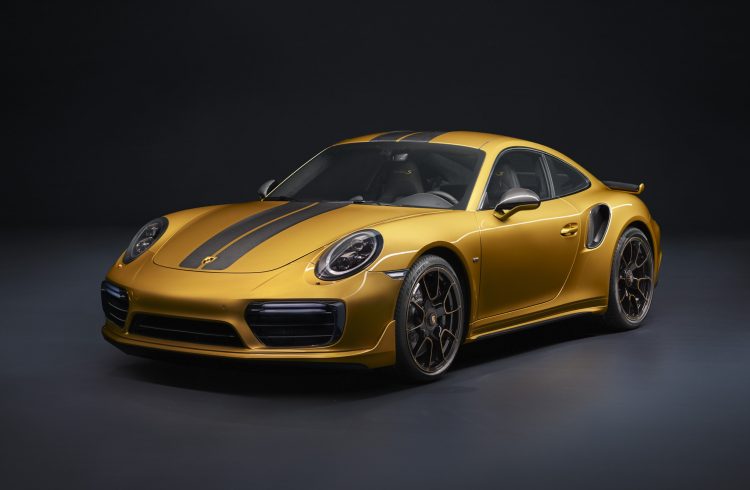 Yep, more power for the Turbo S. No that it needs it. The 911 Turbo S Exclusive Series uses a tuned-up version of the standard 3.8-litre twin-turbo flat-six engine, producing a whopping 446kW of power and 750Nm of torque (up from 427kW/700Nm). This translates to a 0-100km/h time of just 2.9 seconds, with 0-200km/h coming up in 9.6 seconds. Our calculations suggest this makes it an easy 10-second factory vehicle across the quarter mile.

Despite the epic performance, fuel economy is measured at the same level as the regular Turbo S, at 9.1L/100km on the official combined cycle. This means it is, technically, more economical across the average cycle than the Holden Commodore SV6 (9.3L/100km), even though the Porsche develops more than twice the power output.

To help separate the Exclusive Series from the conventional version, Porsche has fit unique 20-inch central-locking wheels, painted in black, with golden yellow metallic highlights applied by a new laser technology. There’s also an exclusive golden yellow metallic body colour, paired with various carbon fibre trimmings, along with a Turbo Aerokit with ram-air scoop and carbon “weave strips” that shape the contour of the roof and bonnet.

Inside, there’s a pair of 18-way power adjustable sports seats with two layers of perforated leather, contrasted with the golden yellow colour scheme. Alcantara is used for the roof lining, while some stitching is in golden yellow including the Turbo S lettering on the headrests.

For the owners there’s a bespoke Chronograph by Porsche Design. It’s inspired by characteristic features of Porsche Design watches, but it uses elements from the car. The housing is made from titanium, with a black titanium carbide coating for added sportiness.

Porsche is planning to make just 500 examples of the Turbo S Exclusive Series. Only a limited number will be made available in Australia, where prices start at $590,700 (excluding on-roads).