Lamborghini is celebrating a production milestone at its Bolognese headquarters, rolling out the 10,000th Huracan from the factory floor. The nameplate is on its way to becoming the best-selling Lamborghini in history. 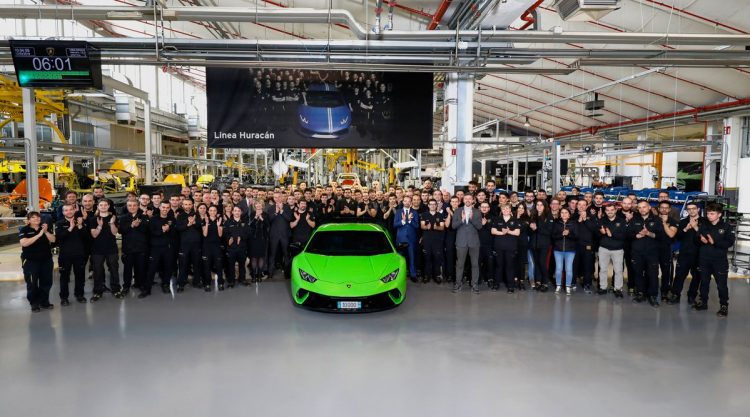 Its predecessor, the Gallardo, is currently the best-selling Lambo model ever introduced. But it looks like the Huracan will overtake it. Buyers snapped up just over 14,000 Gallardos in its 10-year production stint. With the Huracan hitting 10,000 in just four years, it’s certainly on the right track.

Lamborghini launched the Huracan in 2014, and has since been selling quite well with over 2000 units sold every year. During 2017 Lamborghini sold 2642 examples, which was up 12 per on 2016 efforts. This is partly helped by the launch of more variants.

At the moment Lamborghini offers six different versions of the Huracan, including all-wheel drive and rear-wheel drive versions, coupe and Spyder convertible, and the hardcore Performante which received a convertible version at the Geneva motor show still underway.

The 10,000th example is a Performante version, coated in Verde Mantis. This was the colour showcased in Lamborghini’s GT3 victory in the 2018 Daytona 24-hour race, which took place in January at the famous Daytona Speedway in the US. Being the Performante version means it gets the high-output 5.2-litre V10 that produces 470kW, capable of 0-100km/h in 2.9 seconds.

In Australia Lamborghini sales have been steady. Last year the company sold 122 vehicles, down 3.9 per cent compared with 127 in 2016. In previous years though sales jumped considerably, from 27 in 2014, to 84 in 2015. The figures are set to spike big time in the coming years with the arrival of the Urus SUV.