Following this morning’s online leak, BMW has now revealed the G20 2019 BMW 3 Series ahead of its Paris motor show debut tonight. Market launch will commence in some regions as early as March next year. 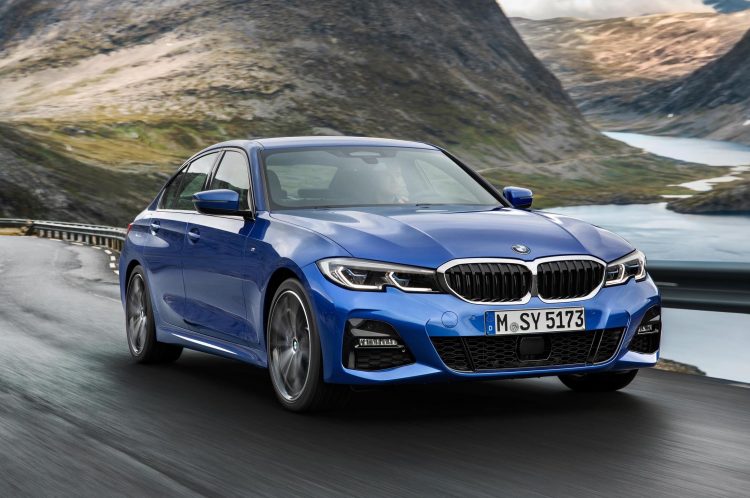 Starting with the design, the 2019 3 Series adopts an all-new look front and rear. Perhaps most notable is the almost twin headlight design with little flicks in the middle, and the semi-circle LED ‘halo’ daytime running lights. There’s also widened LED taillights, the traditional Hofmeister kink at the C-pillar, and a neat spoiler integrated within the boot lid profile.

Based on BMW’s new CLAR platform, the new model is slightly larger than the outgoing model. BMW says it is 76mm longer, at 4709mm, and 16mm wider at 1827mm, as well as just 1mm taller at 1442mm. Much of the extra length is attributed to the wheelbase which is 41mm longer at 2851mm, and the track widths are 43mm wider at the front and 21mm at the rear. This, overall, provides a lower and wider stance ratio compared with the outgoing model. 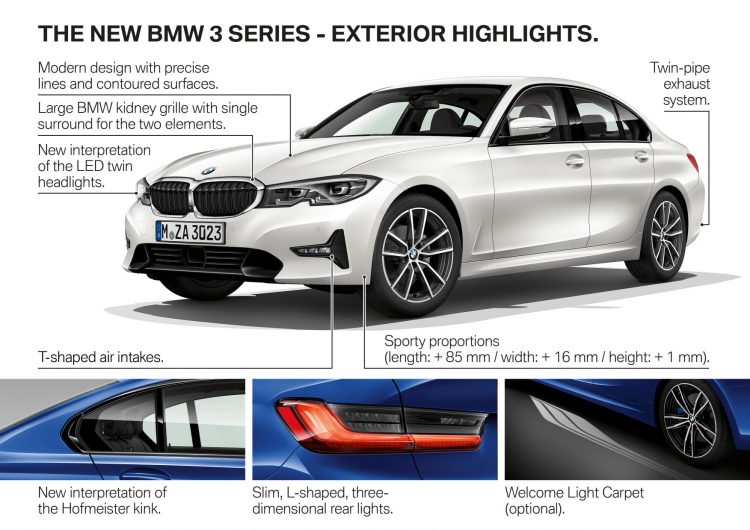 With the switch to the new platform BMW says that up to 55kg has been reduced from the sedan’s weight. There’s also a lower centre of gravity and a 50:50 weight distribution between front and rear to help with overall driving balance. The aerodynamic efficiency has also been improved thanks to the new design, with the 320d offering a drag coefficient of just 0.23.

Under the bonnet a range of similar engines will be offered. Only initial specs are released at this stage, but the 320i will continue with a 135kW 2.0-litre turbo, while the 330i continues with a 190kW tune. For the 318d there’s a 110kW four-cylinder, with the 320d continuing with a 140kW unit. At the top of the diesels is a 330d which uses a 3.0-litre inline six turbo-diesel developing 195kW. 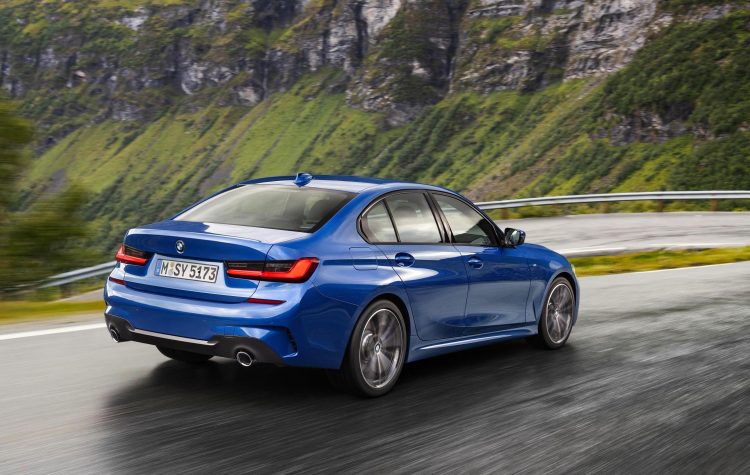 At this stage there are no official details on the M340i, despite the fact that it does exist as outlined in the earlier leak. This variant is likely to come with a 3.0-litre turbo inline six petrol engine producing around 250kW. Other models will also join the range, including a plug-in hybrid variant and of course the M3 performance model.

As standard buyers will be able to select between the Sport Line or Luxury trims, each providing a distinct character for the exterior and interior. An M Sport pack will also be available as an option, adding a sporty bodykit, lowered (by 10mm) sports suspension with adaptive dampers, M Sport four-piston front brakes, and an M Sport locking differential.

More details, including Australian market information, is set to be released soon.