Daigo Saito has won the opening round of the Achilles Formula Drift Asia season at Calder Park, in Melbourne. Saito was driving a highly modified Lexus IS C during the smoked-filled drift-off. 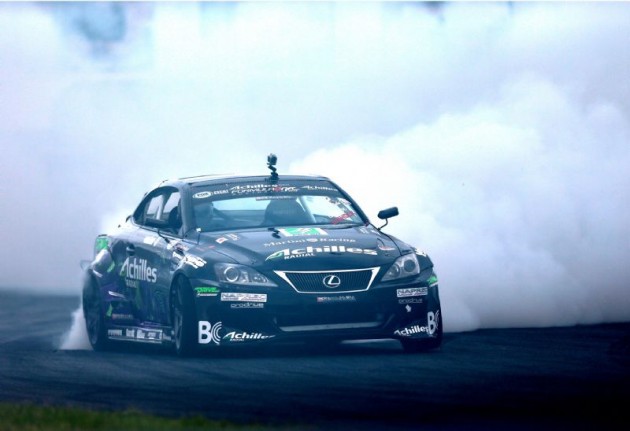 The event was the first time Saito had driven on the Melbourne circuit. Even so, he managed to put on a slightly better show than Australian ace Tom Monkhouse. Saito said,

“I had a fantastic time this weekend and am very happy with the result. It was a great battle with Tom and now I’m looking forward to the next round.”

The purpose-built Lexus IS C is an IS 250 convertible modified into a kind of two-door coupe layout. It features a turbocharged inline six-cylinder engine form Toyota. Toyota performance fans will see where this is going; turbo inline six-cylinder… Yes, the car features the legendary 2JZ-GTE engine.

It comes with Brian Crower engine internals that take capacity out from 3.0 litres to 3.4 litres, while a NOS nitrous oxide system adds any additional power if Saito requires. Overall, the insane package is capable of producing over 900kW of power.

In other areas, the IS C drift car features a Holinger sequential transmission, dual-caliper Wilwood brakes, and a full carbon fibre bodykit with a large rear wing to give the rear end some downforce and traction.

The next round of the Formula Drift Asia season kicks off on June 29 in Kuala Lumpur, Malaysia. It will be the second stint of a three-round championship.

Click play below for some raw footage of the beast tearing up the tarmac at Calder Park.