Alpina has been spotted testing a prototype version of BMW’s mammoth X7, known as the XB7, out on the Nurburgring to develpo potential engine and suspension tuning underneath. 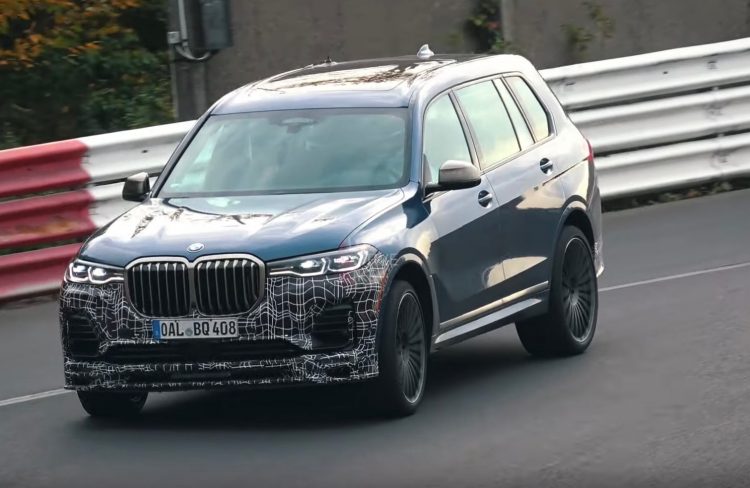 This will be an interesting one as Alpina is renowned for creating extra refined luxury for BMW’s more stately models. It will be the first time the company re-characterises a super large SUV. Although, BMW’s interpretation is already pitched at a very high level, even in base X7 xDrive30d form.

It’s believed Alpina is working on the new V8 version. In standard form the X7 M50i features a 5.0-litre twin-turbo V8 that churns out 390kW and 750Nm. However, after Alpina has finished with it the motor is likely to develop around 450kW.

In other areas, Alpina is set to rework the air suspension setup on the X7. We can expect improved handling yet refined ride quality. Taking a look in the spy video below the prototype actually looks quite stable and surprisingly composed while tackling the Nurburgring.

The prototype is wearing some light camouflage around the front end, suggesting it hides a fresh bumper bar. You can kind of see the unique air intakes with horizontal louvres. Around at the back is some more camo, but we’d anticipate only a revised rear diffuser and exhaust outlets over the standard BMW arrangement.

As per usual, buyers will be able to select from Alpina’s distinct alloy wheel range, while the interior is set to be offered in a variety of exclusive trims. An Alpina-specific steering wheel, instrument cluster, and seats are also likely.

A full reveal will probably take place a bit later this year. Check out how the big girl goes on the Nurburgring in the video below.