Porsche has been spotted testing the 2020 Porsche 911 Turbo 992 at the Nurburgring, in convertible form. As usual, it looks savagely quick yet makes a sinister whooshing roar. 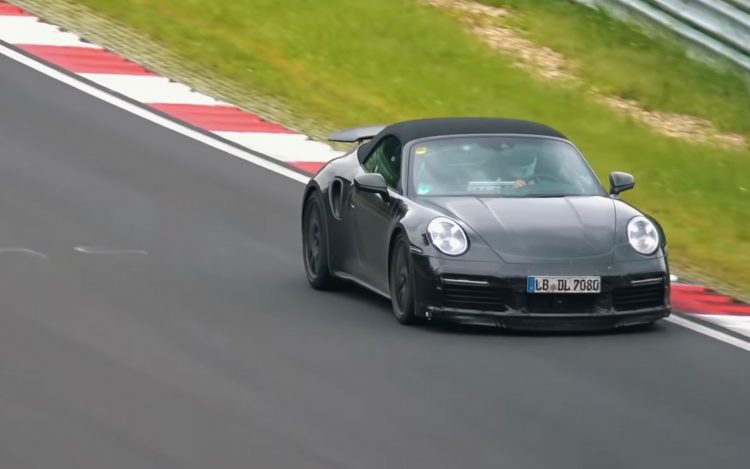 The regular 992 911 Carrera has been revealed and is already on sale, but Porsche is yet to debut the new Turbo model. Judging by this prototype, the new model will continue with its trademark widened rear end, with air intakes cut into the rear guards to feed the intercoolers. Some air exit vents then sit behind the rear wheels.

There are very little concrete details around regarding the powertrain, but rumours suggest Porsche is tweaking the existing 3.8-litre twin-turbo flat-six. Porsche often completely redesigns an engine that, on paper, might seem like the same old engine but in fact it’s very new. For example, the new Cayman GT4 uses a 4.0-litre flat-six but it’s different to the 4.0L flat-six seen in the 911 GT3.

Building on from the rumours, the new engine may produce around 450kW, while a Turbo S model will apparently offer up to around 470-480kW. Undoubtedly, it will come in as the most powerful 911 Turbo in history, whatever engine Porsche decides to offer.

The prototype does confirm Porsche will be sticking to a soft-top roof design for the convertible. These setups are known to be much lighter in weight and can be stored away in a smaller space than hard-top designs. However, they don’t quite provide the highway refinement and quietness of a hard-top.

Since this prototype doesn’t appear to be wearing much camouflage, aside from some black sheeting around the front end and some around the back, we suspect a public reveal is coming up pretty soon. Potentially at the Frank Motor Show in September. Check it out below in the meantime.