After an impromptu leak on Wednesday, the 2019 Peugeot 508 has officially launched, with more photos of the stunning French fastback, as well as important specification details. 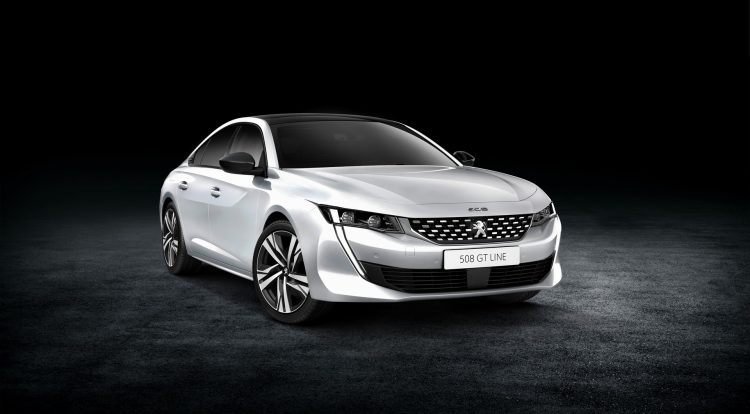 The new 508 is 80mm shorter in length than its predecessor, at 4750mm long, on a 2750mm wheelbase, which is also shorter. Overall height is now 1400mm, but despite these smaller dimensions, interior and boot space has increased. Peugeot promises 485 litres of bootspace, which is accessed via a hatch and is 12L more than before. Internally, front elbow room of 1455mm, or 50mm more than an equivalent Audi A5 Sportback, is touted, plus 30mm of extra rear legroom.

As we saw earlier in the week, the sporty fastback shape is inspired by the Exalt concept, particularly the triple vertical LED taillights and blackout panel along the bootlid. It evokes some of Peugeot’s most succesful historic designs. At the front, the sharp headlamps dip into a prominent grille, with a large lion logo and ‘508’ in the centre is evocative of the classic Peugeot 504.

The interior pushes the dash to the very edge of the A-pillar, with a high-mounted digital instrument cluster, 10.0-inch infotainment touch screen and 12.3-inch head-up display (HUD). Ambient lighting, high quality woodgrain and stitching give the 508 a very premium atmosphere.

Several new petrol and diesel engines feature, including 138kW and 167kW PureTech 1.6 turbos, 95kW 1.5-litre BlueHDi turbo-diesels and 2.0-litre BlueHDi’s with 117 or 132kW. With up to 70kg less weight than the old model, the driving experience should be improved, which is also helped by multi-link rear suspension, variable damping control on some models and electric power steering.

As expected, the active safety story is compelling, with a night vision system that can detect pedestrians at night. CEO Jean-Phillipe Imparato said:

“After the success of our latest high profile launches and our SUV offensive with the multi-award winning Peugeot 2008 SUV, 3008 SUV and all-new 5008 SUV, with the all-new Peugeot 508 we carry the exact same ambition; to shake up the market with an outstanding new car that can compete with the best. The all-new Peugeot 508 is a perfect example of the ambition that we embody in everything that we do; continuing to establish Peugeot as the best ‘high-end generalist’ car manufacturer in the market.”

Details on an Australian launch haven’t been confirmed just yet, but it is expected to go on sale late this year.