Australian drivers expect manufacturers to design cars that can do everything these days – whether it be carrying the full family, going off-road, being full of technology or carrying a heavy load. Today’s utes like the new Mitsubishi Triton can do all of the above. And to give it the full Aussie test, we took one on a camping trip south of Sydney into the bush. 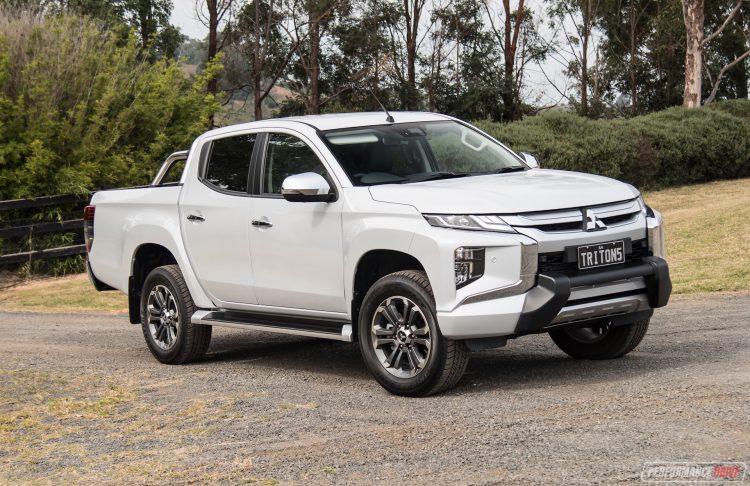 2019 brings the Triton a new design, new interior, more features, a new six-speed auto, and a comprehensive lineup. It is offered in two, four and five seat configuration, and a cab-chassis workhorse. There’s also 4×2, and part-time 4×4, five- and six-speed manuals, and a six-speed auto to pick from.

The range comprises of the GLX, GLX+, GLX ADAS, GLS and the range-topping GLS Premium that we are reviewing here. In the way of engines, you can choose a five-speed manual paired to a 94kW/193Nm 2.4-litre petrol, or a 133kW/430Nm 2.4-litre turbo-diesel in six-speed manual or six-speed auto guise. Prices begin at $22,490 for the base GLX, and peak at $51,990 for the top GLS Premium (excluding on-road costs). 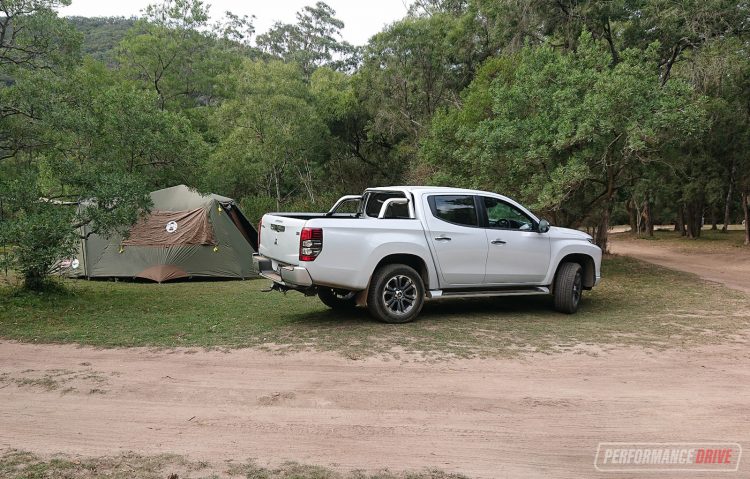 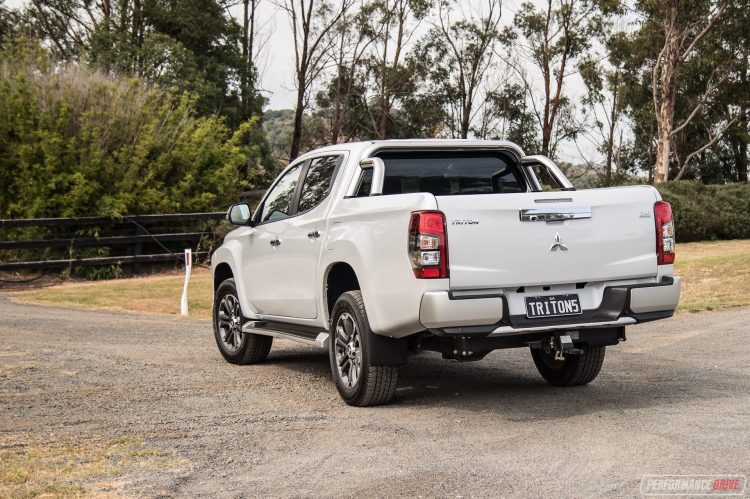 From decades of experience, Mitsubishi’s Triton now has a deep-rooted heritage in everyone’s minds when it comes to hard-working utes. But recent models now offer much more than that. The Triton GLS Premium will now fit the entire family in, and you won’t need to miss out on the latest technologies that are usually reserved for regular passenger cars. 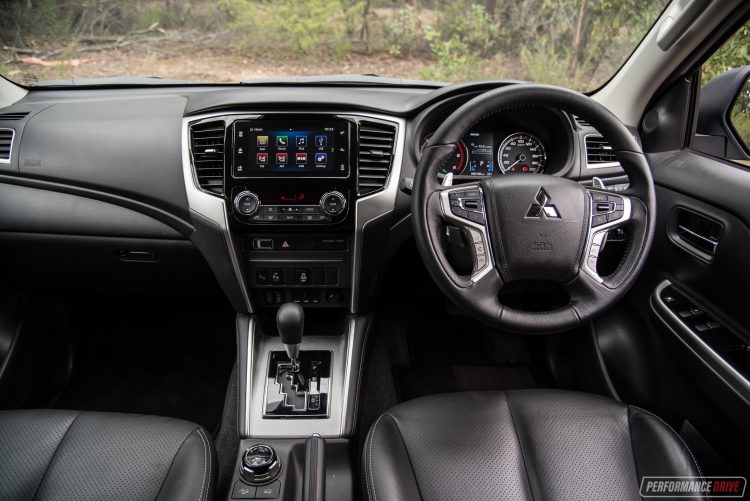 The only technology it misses out on is radar cruise control. But this is one of the most affordable top-spec utes on the market. Cheaper than the Isuzu D-Max, Toyota HiLux, Ford Ranger, Volkswagen Amarok, and Mazda BT-50.

The 2019 model brings in a full exterior overhaul. At the front you will notice the small headlights overpowered by a prominent bumper and grille, and lots and lots of chrome. Perhaps too much for a ute? Mitsubishi calls it the ‘Dynamic Shield’ design philosophy. The rear doors have also been redesigned, with only a gentle curve remaining. At the back a more conservative look has been adopted, with block taillights and a thick bumper bar. 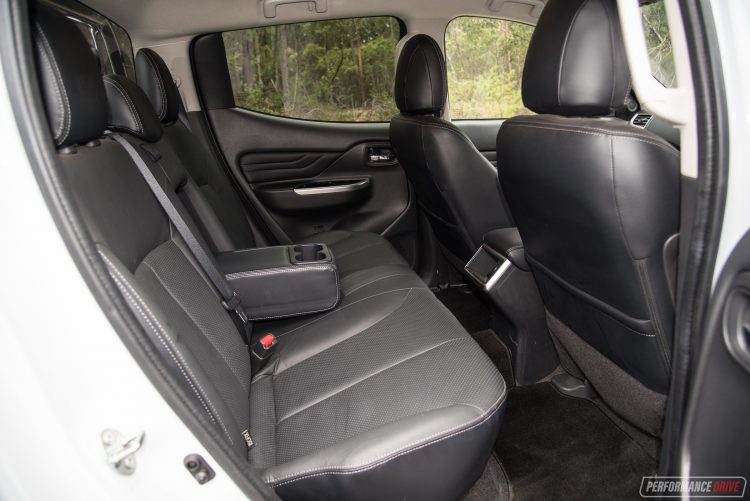 The Triton’s interior has been modernised with softer touch finishes for the GLS Premium. There are still some plasticky areas and cheap looking silver painted sections, but it’s great to see utes don’t have to miss out on a touch of luxury. And the layout and in-car functions are still intuitive and simple to use, which is great for tradies out there on a job who don’t have time to fiddle around.

NVH (noise, vibration and harshness) levels are still conspicuous, with the rough and ready diesel engine, but not more than what you’d expect from this market. An electrically-adjustable driver’s seat will provide satisfactory levels of comfort for most shapes and sizes, but it’s not quite as comfortable as some of the competition. Though, these seats do offer a high-riding, secure feeling that we all love in off-roaders. Visibility is also excellent in that respect. 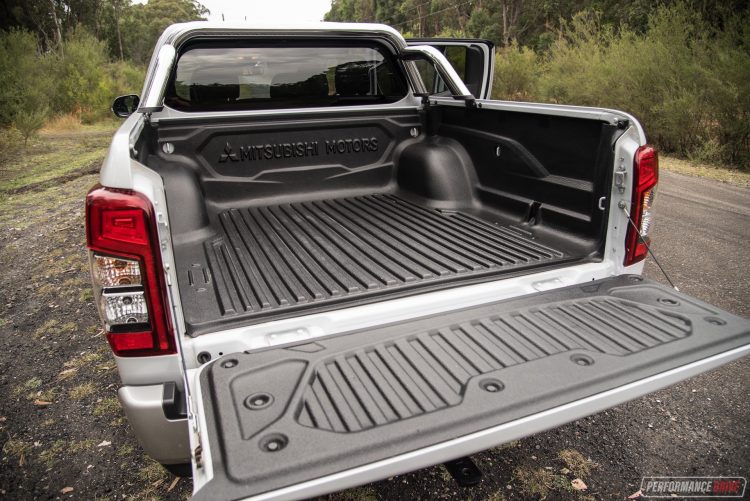 The Triton offers a more than acceptable amount of space throughout the entire cabin for a dual-cab ute. There’s enough room to take the entire family on a camping adventure. If tray size is of the highest importance to you, the Triton has the smallest dimensions among four of the most popular utes on the market; HiLux, D-Max, Ranger and BT-50.

It also has the second lowest payload capacity of 858kg. And if you plan to tow a large boat or caravan, the Triton maxes out at 3100kg – the other four are rated at 3500kg. But these are the maximums and don’t necessarily take into account the gross combination mass. Overall, the Triton shapes up pretty good if you add that to the equation.

Servicing intervals are scheduled for every 15,000km or 12 months. And Mitsubishi now offers a highly competitive seven-year/150,000km warranty. 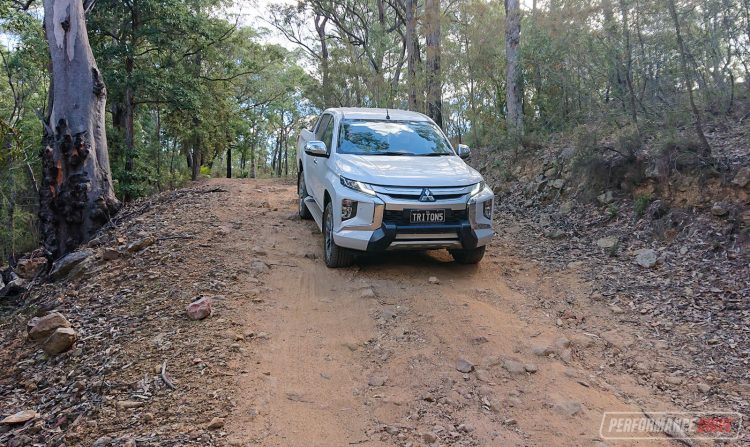 On the road the four-pot diesel engine produces 133kW of oomph. And with 430Nm of torque it means there is plenty of pulling power for a tradie’s needs. Peak torque kicks in at 2500rpm, so there is a narrower band of optimum grunt than other models in this class. Like most rugged diesel utes, it doesn’t make much difference to your acceleration if you rev the engine past the peak power output revs of 3500rpm. But on the road (and off road), you’ll rarely feel short-changed.

Getting the Triton moving in a hurry is also greatly aided by the new six-speed auto transmission, doing away with the archaic five-speed auto. It is a strong-feeling gearbox that shows no sign of confusion or hesitation; it always knows what to do. Gear shifts are slow, but this helps to keep it reliable and robust under pressure. Smoothness is also very welcome when you’re tackling serious off-road terrain. Engine revs are now kept lower at highway speeds with the extra ratio, which improves fuel economy. However, it may have been even nicer if Mitsubishi offered the eight-speed auto that’s seen in the platform-sharing Pajero Sport. 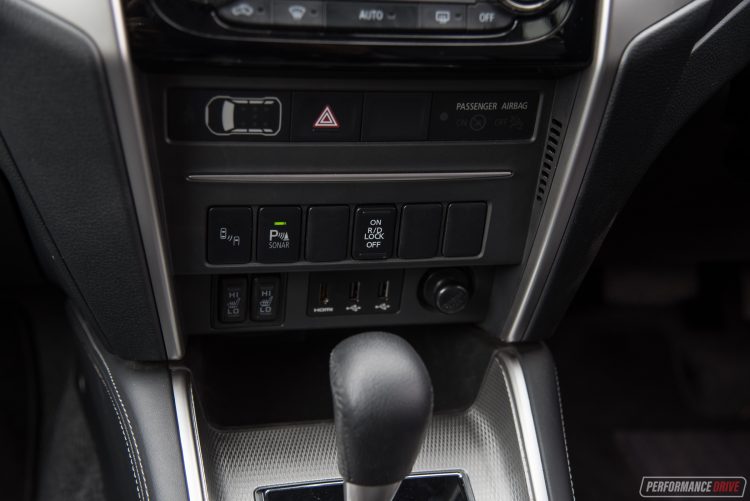 Official fuel consumption figures rate the Triton diesel at 8.6L/100km on the combined cycle. For once, our average hovered around a similar figure of 8.7L/100km. This included a mix of slower off-road driving and highway cruising. In terms of competing with the rivals in this area, the Triton burns one of the highest amounts of fuel in terms of the official ratings. But, it seems to be one of the more realistic ratings, unlike many of the rivals. The fuel tank holds a hefty 75L, which means less spontaneous sausage rolls from the petrol station and a theoretical average range of 872km.

The GLS Premium with 18-inch alloy wheels has a ground clearance of 220mm, which is the second lowest behind the Amarok. But performance over irregular surfaces is helped by a creditable approach angle of 27.5 degrees, and a departure angle of 23 degrees. Rough surfaces are also easy to negotiate thanks to positive feedback and confident steering control. And even with the greater steering rotations lock to lock compared with others, it is easy to maintain lane tracking at highway speeds. 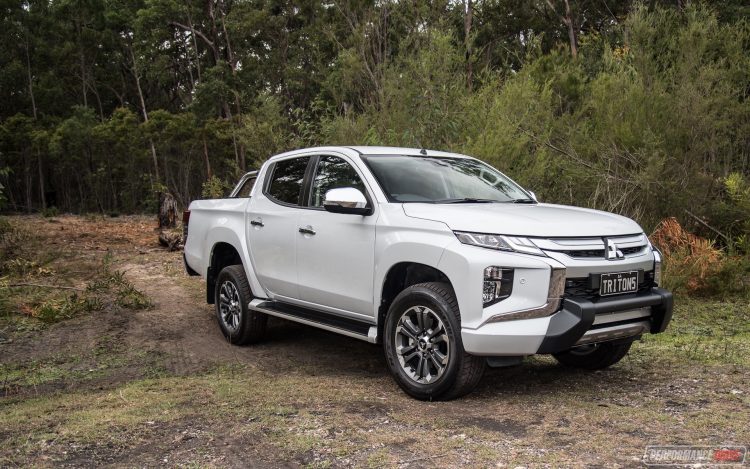 True truck-like strength also shows with the leaf spring rear suspension. Although, the top model is fitted with less heavy-duty leaf springs to provide a more comfortable ride. Double wishbones with coil springs and a stabiliser bar are up front, providing good wheel articulation when negotiating deep ditches. All 4WD models are fitted with underbody metal bash plates, while a rear differential lock is only available on the GLS Premium.

GLS and GLS Premium models also come with Mitsubishi’s new Super Select II 4WD system. It is a dial operated system that offers four driving modes: 2WD high range, full-time 4WD, and high and low range 4WD with locked centre differential. These modes give the amount of flexibility needed to negotiate advanced off-road adventures. And in our opinion, the Triton remains as one of the very best performers in really rough conditions. 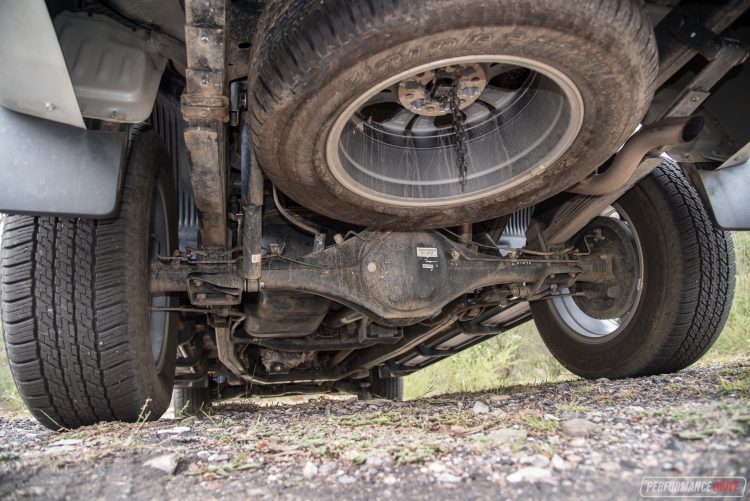 On paper the new Mitsubishi Triton might slightly trail behind the mainstream competition in areas like towing capacity, payload, ground clearance, and tray size. But they might not be important to everyone – especially if you’re not planning to utilise the absolute limits. To drive on and off the bitumen the Triton will live up to most adventures.

We love the fresh exterior design (except the excessive chrome bits in the higher-spec models), the new six-speed auto, the lengthier warranty from Mitsubishi, and the fact that the Triton GLS Premium undercuts almost all top-spec rivals in terms of price.

PROS:
– Roomy and feature-filled cabin
– Good value for money; one of the most affordable top-spec utes on the market
– New 6-speed auto, although 8-speed from Pajero Sport would be nicer
– Chiselled exterior design
– Excellent off-road performance and off-road hardware
– 7-year/150,000km warranty sets new standard for the ute class

CONS:
– Falls behind class benchmarks for towing capacity, payload, ground clearance, and tray size
– Silver interior plastics look and feel cheap
– Seats not as comfortable as some of the top-spec rivals