For a brand that stemmed from heavy military influence, Land Rover has made huge advances over the decades to become one of the most popular luxury off-road carmakers in the world. The Discovery, now in its third generation and fifth series, has moved away from its traditionally rugged and boxy off-roader, to become a smoother, more sophisticated, and modern SUV. 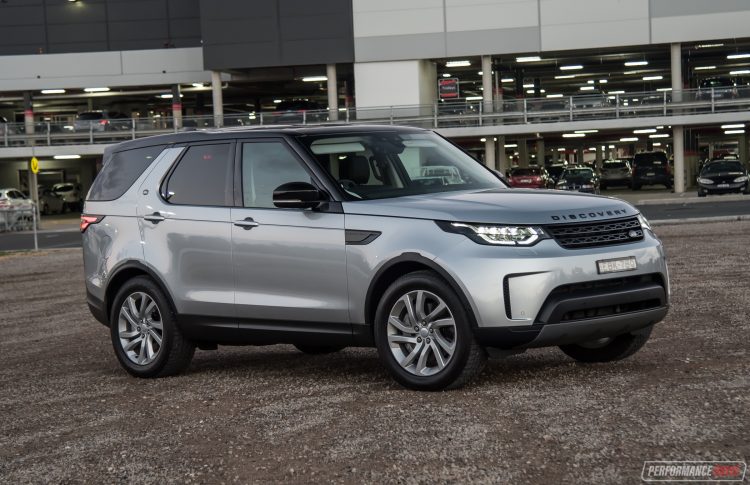 With that modern design, and no longer being built in the UK (Slovakian manufacturing commenced in 2019), hopefully off-roading enthusiasts will still be drawn to the large SUV. It shares the same platform as the Range Rover and Range Rover Sport.

Luckily for Australia, Land Rover is one of the few brands that offers a huge range of variants compared with some European brands. You can opt for five or seven seats with the Discovery, and choose between four different diesel engines. There’s two 2.0-litre four-cylinder units; the single-turbo Td4 (132kW/430Nm) and the twin-turbo Sd4 (177kW/430Nm). And there’s two 3.0-litre V6s; the single-turbo Td6 (190kW/600Nm) and the twin-turbo Sd6 (225kW/700Nm). Equipment-wise, you can choose from the S, SE, HSE, and the top-spec HSE Luxury. 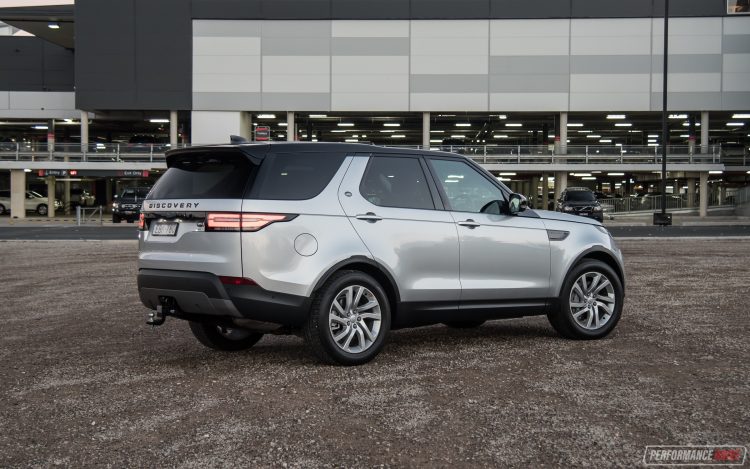 The Discovery has always been recognised as a practically-designed, off-road-oriented performer. This has meant boxy, and rugged, with a spare wheel on the tailgate and little sunroofs at the rear. Most of these design cues have now been ditched to become more conventional and, most prominently, stylish.

One of the notable changes is the now curved and smooth front and rear. The tailgate previously housed the spare tyre, and now it tucks away under the rear as a space-saver (full-size spare is optional). Designers have attempted to showcase some nostalgia by still having an off-centre number plate position as if the spare tyre is still located on the tailgate, and the roof rises up slightly towards the rear. But this layout has received a fair bit of criticism since it debuted. Other than that, it’s a fresh design. There’s no missing the new Discovery on the road. It stands very tall (1909mm), bold, rear-heavy, and unmistakably Land Rover. 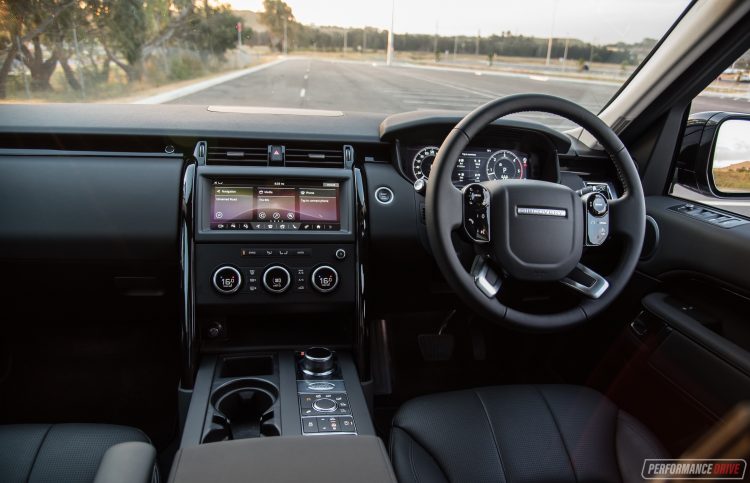 On the inside, the interior is also unambiguously Jaguar Land Rover. It adopts that clean, smooth and minimalist layout, but with lots of advanced albeit hidden technology. As always, the materials that make up the cabin feel unquestionably premium in quality. The leather on the seats feels thick and durable, and the door trims and dash are covered in a soft-touch synthetic material.

In the front row, the interior feels huge. It’s as comfortable as sitting in a lounge chair. There’s even foldable armrests with infinite adjustment settings. You certainly notice the high seating position as you look down over other drivers below you. The electrically-adjustable steering column also provides a wide range of adjustment, and the wheel itself includes glossy black see-through buttons, like mini touch-screens, with all functions merged together. Due to the way they all merge together, we find it tricky to feel where you need to press without looking down at the steering wheel, compared with conventional buttons or dials. 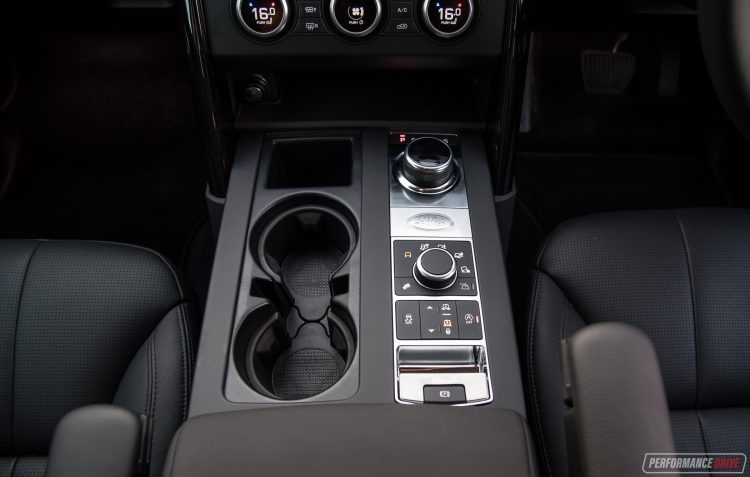 The buttons on the steering wheel also morph into different commands according to which menu you’re in. This is a swanky new feature that first popped up on the Range Rover Velar (we think?), and it is worth playing with first before set off, just so you’re used to it. We love the ambient lighting, the crisp and simplistic instrument cluster, the Land Rover puddle lamps, and elegant push-button to open the glove box.

InControl Touch Pro is the name of the latest Land Rover technology fitted into the Discovery. It includes a 10-inch high-resolution touch-screen that allows dual menus to appear side-by-side. The system presents digital television capability, along with Wi-Fi, satellite navigation, and vehicle controls. Thankfully, the climate settings are controlled by separate dials. If you’re an audio nerd, you’ll enjoy feasting your ears on the superb 10-speaker sound system, or the optional 11-speaker Meridian upgrade. 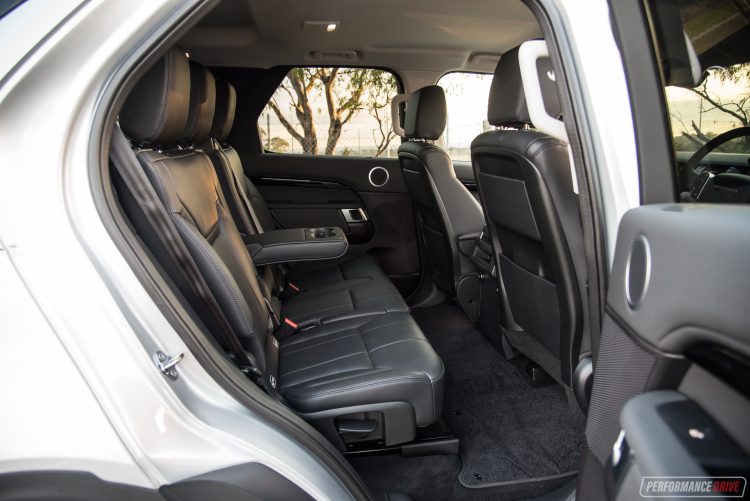 There’s no compromise on cabin space in the second row either. The seats can be slid back and forth to maximise the space where you need it the most. In fact, Land Rover has designed every seat in the Discovery to be the best seat in the house. It shows, as bodies up to 190cm tall can comfortably fit in the third row. And the third row can be optioned with heated seats, and four-zone climate control is available. You can even configure the seating positions from your phone via the app, from the tailgate, the c-pillar at the rear doors, or the centre screen up front. Stadium-style seating also helps to minimise any prevailing claustrophobic feelings. It is a marvellously expansive, versatile, and welcoming place, in here.

Boot space is at the top of the class, measuring 2500 litres with the seats folded down, and 258 litres with all seven seats in position. Accessing this space is made simple with an auto access height function, thanks to the standard adjustable air suspension. Vehicle body height is dropped by an initial 15mm when the ignition is turned off or when a passenger unclips their seat belt. When a passenger opens a door, the vehicle lowers by an additional 25mm to reduce the total step-out height by 40mm. 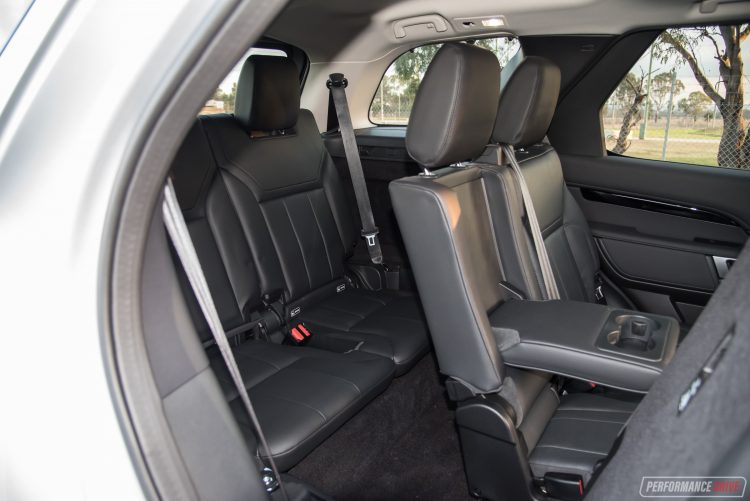 The feature-list in the Discovery is huge, and we won’t bore you with listing them all here. There is really nothing that has been left out which isn’t at least offered as an optional extra – even things you might not have heard about before. Like heated washer jets, or a solar attenuating windscreen. Mind you, those optional extras can send the total price north very quickly.

Land Rover offers a three-year/150,000km warranty, which is now below standard for most mainstream carmakers in Australia. However, three years is still the norm for most premium brands. The manufacturer also offers a five-year or 130,000km servicing plan for $2450. 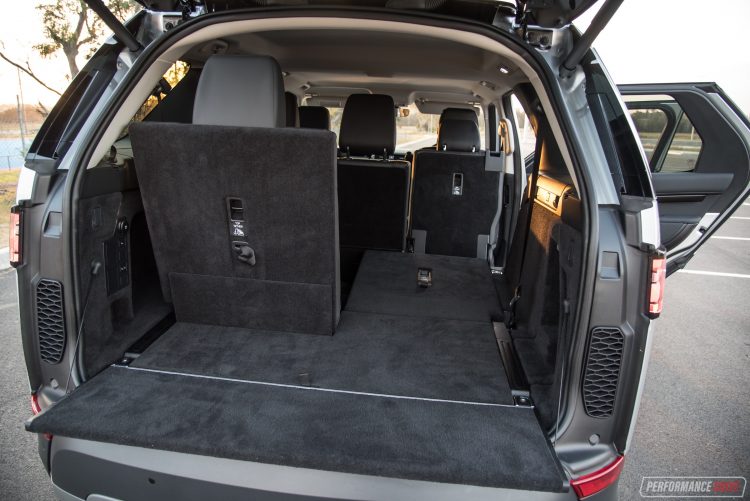 The SD6 3.0-litre engine we’re testing provides some impressive outputs. 225kW means the V6 diesel provides loads of effortless energy. And the punch from 700Nm of torque, kicking in at a low 1500rpm, means it is a perfect match to move such a large SUV along, with all the family on board.

In fact, it will go further, throwing you back into your seat when pushed. With a full load or not, no hill is ever a struggle here. If you’re cruising and have a sudden need to speed up, the Discovery Sd6 tends to have an initial throttle response lag, until it wakes up and releases its mammoth torque. You would assume that getting 2236kg of metal moving would be tough business. But this beast manages the 0-100km/h sprint in a claimed 7.5 seconds. Our testing revealed a slightly better 7.45 seconds. It’s quick. And especially quick for a diesel in this class.

The widely-used ZF eight-speed automatic is as smooth and versatile as they come in all driving conditions. It is available with a two-speed transfer box, providing selectable high and low range gears on the move at up to 60km/h. It also provides a standard 50/50 torque split between front and rear wheels, but it uses a range of sensors to distribute torque depending on the conditions. If you’re not interested in low-range gearing, the single-speed transfer box provides a torque split of 42/58 across the front and rear axles, and can redistribute torque to the axle with the most grip, up to 62/38 and 22/78, respectively. 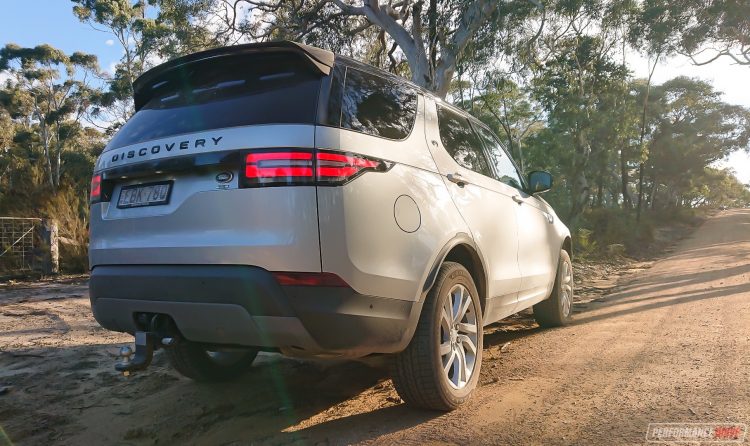 If you’re searching the market for a decent towing SUV, the Discovery meets the maximum towing capacity of 3500kg. This is 500kg more than the Mitsubishi Pajero and equivalent to the Volkswagen Touareg and Toyota LandCruiser. There are also some nifty semi-autonomous towing technologies to make the task of hauling as safe and simple as possible. Advanced Tow Assist steers a trailer into position without the driver using the steering wheel, for example. Land Rover explains:

“Once the driver has configured the system on the central touchscreen by entering key trailer details, responsive trajectory lines appear on the feed from cameras in the door mirrors showing the anticipated direction of the trailer. By steering the trailer using the rotary Terrain Response 2 controller and operating the pedals, the driver is able to reverse park trailers with absolute confidence as the vehicle automatically calculates the necessary steering inputs. The intuitive system will alert the driver if the steering input requested is too severe and would cause a jack-knife situation.” 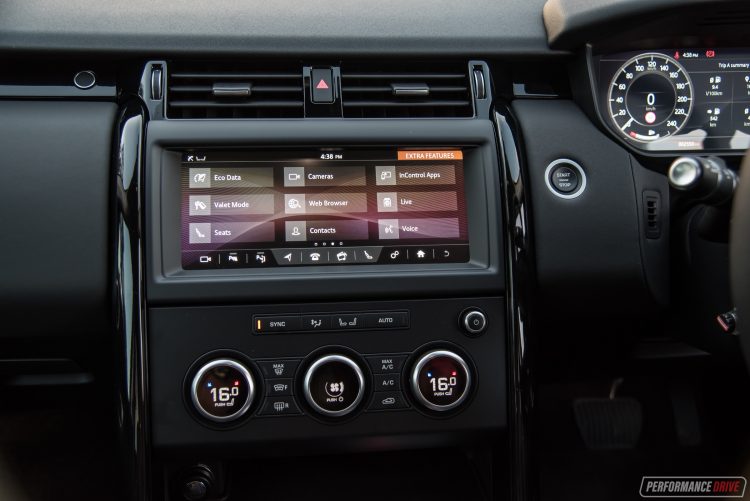 The Discovery would not be a true Land Rover if it wasn’t a high performer off-road too. With 283mm of ground clearance, combined with an approach angle of 34 degrees, a break-over angle of 27.5 degrees, an impressive wading depth of 900mm, a departure angle of 30 degrees, and with a suite of off-road technologies, the Discovery is expectedly awesome off road.

No matter what type of road you’re on, in the Discovery it always seems like it is just a walk in the park. It has outstanding geometry and wheel articulation of 500mm, as well as four-wheel independent air suspension. And even though the Discovery is tall, it doesn’t feel as tall as it is through corners. It feels confidently planted, and displays nominal body roll. In the city, thanks to the air suspension, you’ll barely notice those annoying shopping centre speed humps. The steering is also refreshingly light for such a big SUV. But at times, that also means that you don’t feel so in touch with the road ahead at times.

The Discovery looks like an SUV that would hit the wallet hard at the fuel stops. Surprisingly, the official average consumption figure is 7.8L/100km. Our heavy-footed driving returned 8.5L/100km, which is very decent considering the high engine outputs. A big 85L fuel tank also means you can travel far between stops. The theoretical average range is 1090km.

If you want to feel like the king on the road by having the biggest vehicle, and also the most luxurious in this specific class, yet still want talent when it comes to off-roading, you’ll love the new Discovery Sd6 . Inside and out, Land Rover knows how to lead the way in offering deluxe, well-appointed, technology-filled SUVs, while maintaining its off-road capabilities and heritage.

There’s a huge amount of space inside for a large family – and no seat has been forgotten for comfort. We dislike the price hikes for optional extras, but we love the gutsy twin-turbo V6 engine. It all feels so nice to drive. Comforting yet empowering.