Ford has been spotted again testing a prototype version of the upcoming 2019 Mustang GT500. And judging by this video, the new model will receive a very fast-changing automatic gearbox for the first time. 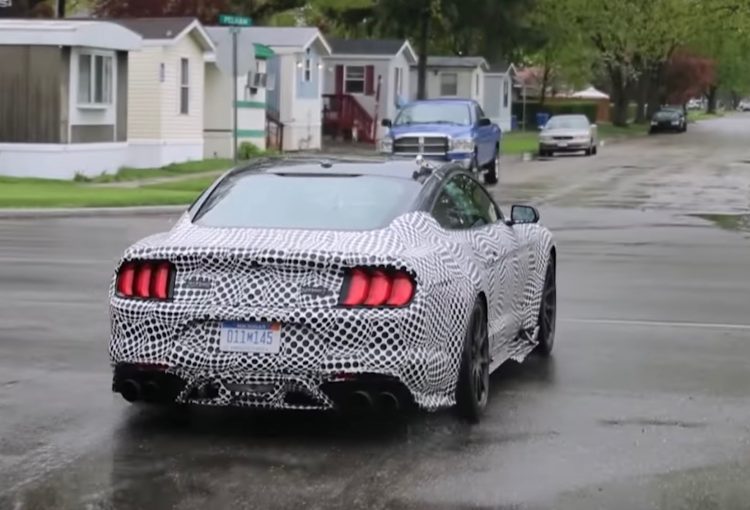 The prototype appears to be wearing a near-production body, which could give us the clearest indication yet on what the design will entail. At the front the spoiler seems more defined than what we’ve seen before, while the back features a neat and somewhat detailed diffuser section with quad-outlet exhausts.

If you listen closely, you’ll not only hear a sinister V8 lurking under the bonnet. You’ll also hear signs of what seems like a dual-clutch transmission. Ford does offer such a transmission type in the latest Ford GT supercar, so it might not be as farfetched as it may seem.

The prototype upshifts seriously quickly, even though it is only chugging around in the suburbs. The other option is it could simply be the new 10-speed auto which will feature in the facelifted regular Mustang GT arriving in Australia in the next few months.

Another interesting piece of evidence revealed in the video is the engine sound. The new GT500 has long been rumoured to feature a forced induction version of the 5.2-litre ‘Voodoo’ V8 that powers the current GT350.

In the GT350, the engine uses a flat-plane crankshaft and is capable of revving to 8250rpm. It’s an evolution of the 5.0-litre supercharged V8 ‘Coyote’ engine we had in the Ford Falcon-based FPV models, only it uses a slightly larger bore and stroke, with a high compression ratio of 12.0:1.

The GT350 engine produces 392kW and 582Nm in naturally aspirated form. With a supercharger or turbocharger bolted on, the output could easily hit the projected 700hp (522kW) output. The interesting thing in the video is that it does sound like a V8 that uses a flat-plane crank, as this engine layout usually burbles from side to side, just like in the video. Check it out below.