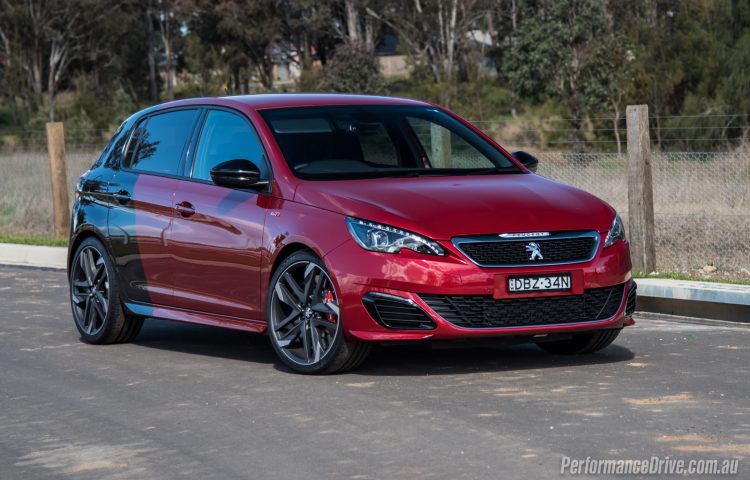 As you’ve probably guessed, that 270 figure refers to the amount of horsepower it produces. Meaning, this frantic French front-drive hatch is flinging out 200kW/330Nm; it’s one of the most powerful two-wheel drive hot hatches on the market. Fortunately, it’s not all about power. The 270 also brings some very tasty component upgrades. We’ll get to them later.

Peugeot has a lot of competition to deal with in this space. So, to try and tame some of the other beasts, Australian prices kick off at a competitive $49,990. If your care factor is zero in regards to sheer power, the almost-as-exciting 250 version is $5000 cheaper. 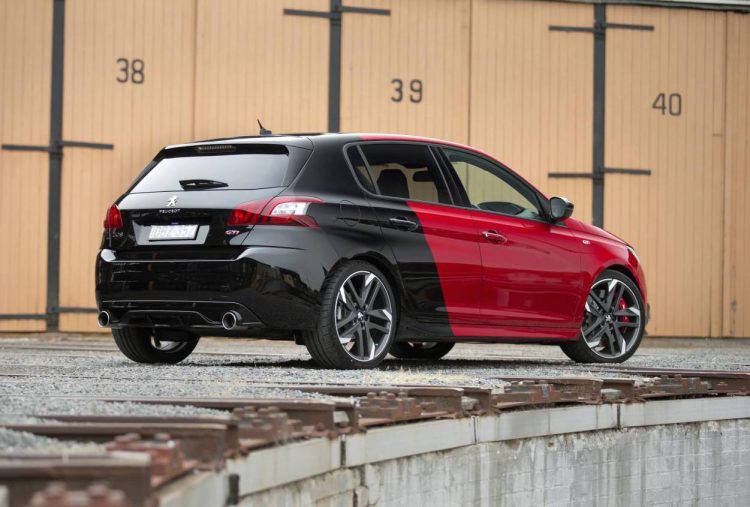 The 270 retains the 1.6-litre turbo four-cylinder as the 250, running up to 36psi (according to the on-board boost gauge). Sure, the boost pressure is high but the specific power per litre is amazing. Whip out the calculator and see. It will tell you this tiny engine is producing 125kW per litre of combustion volume. That’s more than you get in a 304kW Commodore SS (49kW:L). It’s even more than you get from a 545kW Ferrari F12 (86.5kW:L).

Aside from the triumphant engine, the 270 sends power through a six-speed manual (no auto option) and into a tight Torsen limited-slip differential. This isn’t offered with 250 junior. The 270 also comes with more serious brakes to make sure the extra poke can be revoked, with 380mm front discs and 268mm on the rear. Multi-piston Peugeot Sport front calipers, painted red, do all of the clamping. 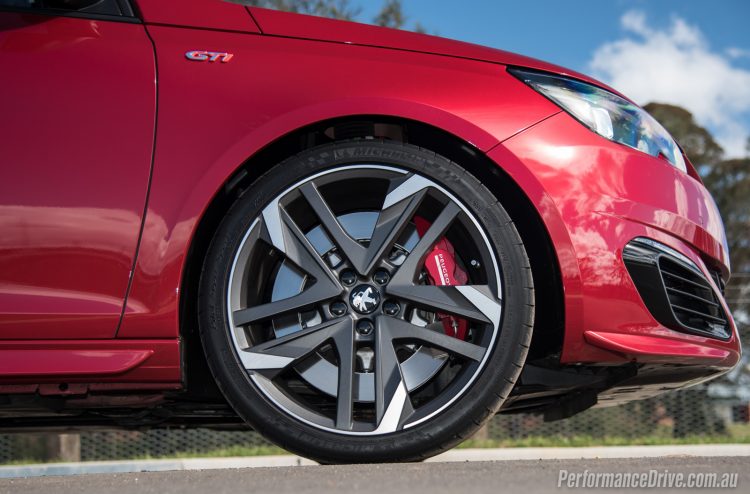 Passengers are treated to slightly different Peugeot Sport front sports seats and a similar (if not identical) rear bench as featured in the 250. These are quite stiff, particularly the rear bench. In the front they do hold you in though, with nice meaty side bolsters giving you a hug every time you turn. As a bonus, the 270 front seats have a massage function as standard – how cool is that? No other hot hatch or even moderate-temperature hatch gets this level of pampering as standard. They work too, gently kneading your back as you drive along.

Overall cabin practicality is pretty good. Well, the 308 was awarded European Car of the Year in 2014, so it should be good. We think it’s not as spacious as some rivals, and the big chunky front seats do seem to sap any of the airiness and openness the cabin might otherwise have. In summer the rear passengers will boil, with no rear vents in sight, but other than these nitpicking points the 308 is a rather nice place to be. It shows off a kind of French carefree attitude toward fussiness, with a clean and clutter-free dash topped by a companionable 9.7-inch touch-screen and on-board 6.9GB hard drive, with literally five physical buttons down below.

Storage is a bit of an issue, with not much available around the centre console and the door pockets are too large and lack any contouring, so anything you do put in them ends up being shaken, rolled, and battered. Peugeot must think people still use a glove box for gloves as well, as it is so small. It isn’t even able to house the standard log book and owner manual. Peugeot must also think people like their gloves cold, as it’s air-conditioned. Cargo space is more like it, rated at 470L/1309L, depending on the position of the rear seats. This tramples on the VW Golf GTI (380L/1270), the Ford Focus ST (316L/1215L), and the Renault Megane R.S. (434L/1247), for example. 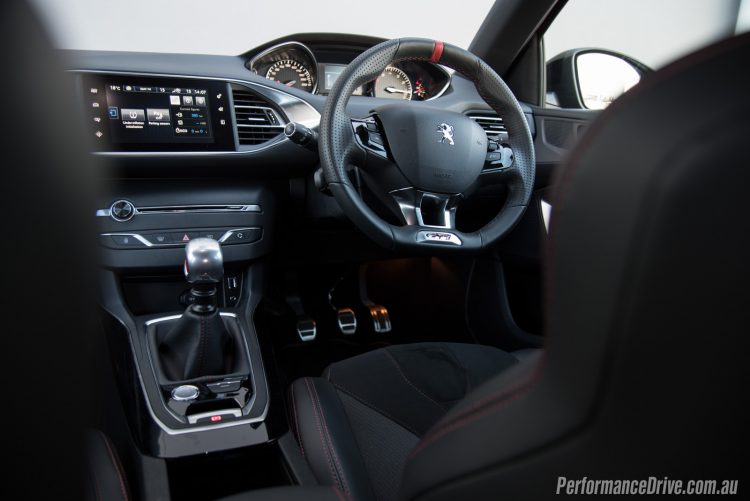 You won’t be thinking about the quirky interior when you drive this thing, as it pushes all of the right buttons. Well, what buttons are available anyway. There is a button (sport) to boost the engine sound. But, stupidly, this is only amplified through the speakers in the cabin. In our opinion it’s a silly gimmick that was obviously developed by some nerdy computer engineer, probably too young to know about the brand’s raw rally heritage (remember the Peugeot 205 GTi?). Worse still, it just doesn’t sound like the engine, it’s obvious, and it doesn’t seem precisely synced with your throttle movements either. An easy solution is to simply not push the sport button. Fortunately, audiences outside the car are treated to a nice beefy exhaust note.

For the driver there’s a tiny sports steering wheel which can take some getting used to. Once you’re used to it you realise just how quick and darty this thing is. It’s more eager to jump into corners than one of those sprint boat navigators. It’s crazy. The small steering wheel (351mm x 329mm) doesn’t only accelerate your rotational effort, the 308 GTi also uses a quick-ratio electric power steering system with speed sensitivity.

Providing support for the fanatical steering is a very competent and confident chassis. Around fast sweeping bends it is pretty much unstoppable, providing concrete solidity, and the capability of hitting big g-force. This is partly helped by the sticky Michelin Pilot Super Sport tyres fitted only to the 270. In fact, you’ll have to be thinking well ahead if you’re planning a duel with a mountain road, because it is super-agile and almost too fidgety. 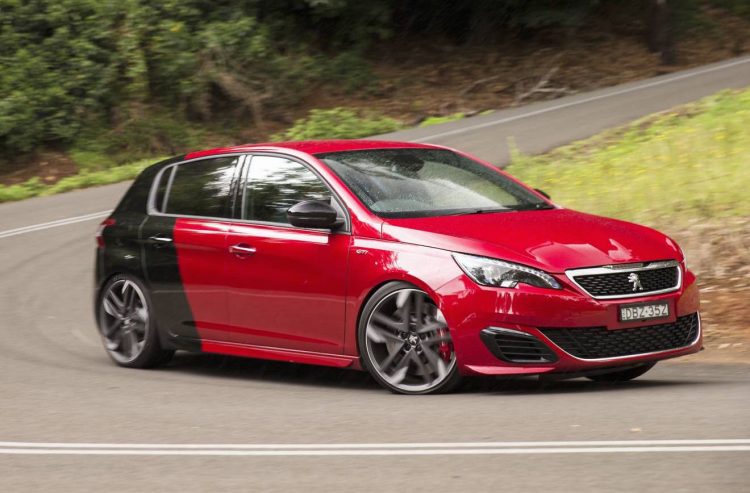 The limited-slip diff in the 270 adds noticeable grip and longitudinal traction. It’s also good for getting the most out of the engine exiting corners, so long as you modulate the throttle. If you just floor it (with traction control off) you’ll get the front-wheel drive equivalent of powersliding in a RWD car; a weird combination of torque-steer and understeer, with just as much tyre smoke and very little corner rotation.

Being a top-notch hot hatch the GTi 270 does have a firm ride. Initial bump is really rigid, like the tyres are made from solid rubber. However, the compression and wheel movement seems acceptable for this style of vehicle. If you’re going to hit a bump, hit it hard and fast, in other words.

As for the engine performance? What can we say. It’s awesome. Very torquey, too. Even though it’s only a 1.6 running insane boost, there isn’t much turbo-lag. Well, so long as you don’t drive it like a diesel. And if you’re thinking of buying a car like this you shouldn’t be thinking of driving it like a diesel. Peak torque – feels like more than 330Nm – comes in from just 1900rpm. You can use third gear to really surge up to the next corner, or to pull away from roundabouts and so on. This makes it surprisingly versatile and practical in all environments.

A lot of the performance is thanks to the car’s weight, or lack thereof. It contains just 1178kg worth of matter (tare). This is easily one of the lighter weight hot hatches around. When you’re driving and you think about its low weight, all of the above makes a lot of sense. 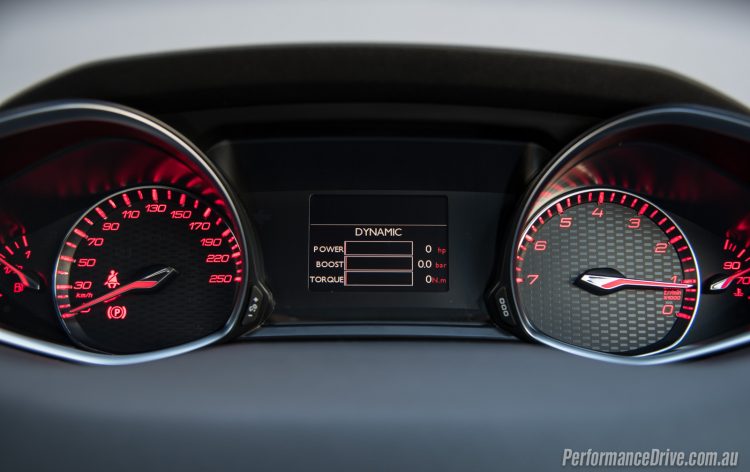 The 308 GTi 270 is a surprisingly versatile hatch with good boot space, engine torque, and a highly committed chassis. The ride will be a little too firm for some – most cars in this segment aren’t much better – and the cabin is a little quirky and requires some getting used to. For outright thrills and excitement, it is hard to match in the front-wheel drive world. And being a 1.6 means fuel economy is excellent. We average around 7.0L/100km.

For this price though it is stepping on the toes of the all-wheel drive VW Golf R and Ford Focus RS. Both of these are worth a look. We’d also suggest you check out the slightly more civilised 308 GTi 250 version as it can save you $5000 while bringing similar credentials.