It’s billed as a “family sports car”, and even though there is nothing sporty about the 2016 Mitsubishi Pajero Sport in the traditional sense of the word, it does present quite an adventurous and very capable set of skills. 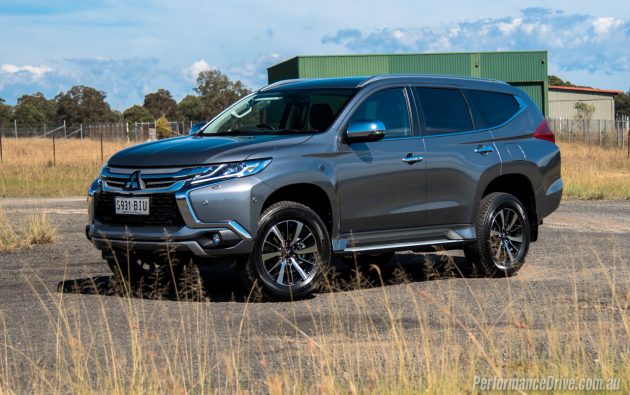 This is the replacement to the local Challenger – one of our favourite off-road machines. The rename follows global outlets that have been using the Pajero Sport name for the Challenger since it was introduced back in the late 1990s. It’s based on the Triton once again, giving you some indication of its heavy-duty nature.

Like the latest Triton, the Pajero Sport gets Mitsubishi’s new 2.4-litre turbo-diesel four-cylinder engine producing 133kW and 430Nm (up from 131kW and 350Nm). It’s matched to an eight-speed automatic, with no manual option available across the three-tier lineup. We’re testing the flagship Exceed variant which starts at $52,750. For budget-conscious buyers the base model GLX starts from $45,000. 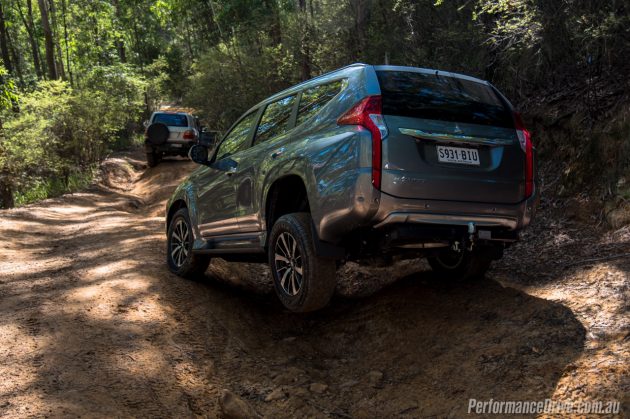 Even so, cabin space is abundant, with loads of headroom in the front and rear, and an impressive amount of legroom especially at the back. Strangely, there is a confined footwell and lateral legroom for the driver due to a thick centre console. Rear passengers in this top Exceed model get their own flip-down DVD player and 9.0-inch LCD screen, making it the perfect vehicle for exploring Australia’s vast land with the kids.

Front-seat passengers aren’t left without entertainment. There’s a 7.0-inch touch-screen interface with Android Auto and Apple CayPlay technology for all variants, sending sounds through an eight-speaker sound system in the case of this Exceed model. The big comfy leather chairs in the front are heated too, making it one of the most comfortable heavy-duty SUVs in this class in our opinion. 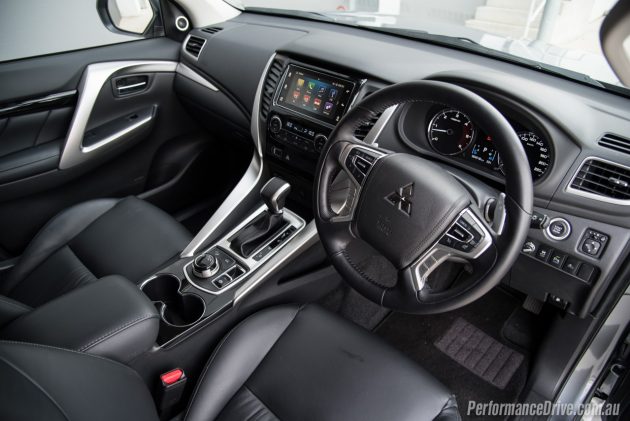 Speaking of class, the interior setting and materials used in the Pajero Sport are quite impressive. It’s obviously no European luxury car but it is plush for a mainstream Japanese 4×4, particularly considering it’s based on a ute. We also think it’s a massive improvement over the old Challenger, thanks to contrasting silver highlights and premium-feeling touch surfaces.

We’re not a fan of the confusing arrangement Mitsubishi has used for the driving modes. There’s a main toggle dial down on the console near the gear lever, and then there are configurations for the rear differential on the lower dash, and then more options to the right of the steering wheel. Why not keep these all together?

Being a vehicle targeting families, cargo space is going to be rather important. In the Mitsubishi there’s 673 litres, expandable to 1608L when the rear seats are folded. This doesn’t compare all that well to the key rivals, with the Toyota Fortuner offering 1080L/1702L and the Isuzu MU-X presenting 1047L/1830L. Towing capacity is rated at 3100kg (750kg unbraked), trumping the Fortuner’s 2800kg capacity, and the MU-X/Ford Everest’s 3000kg rating. 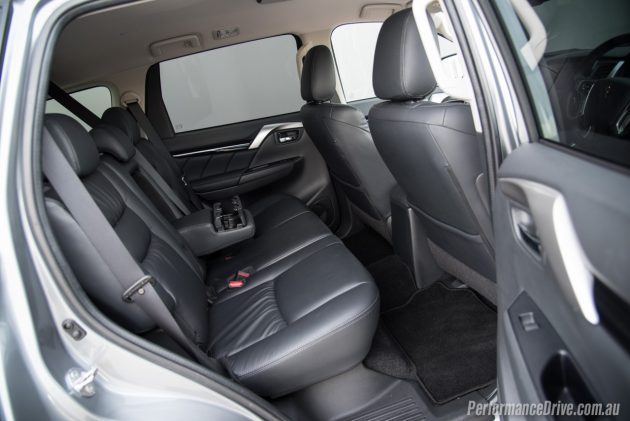 For general duties, the new Pajero Sport is a bit of a tank to drive. The external proportions will take a moment to get used to, and the high seating position means you can peer down over your motoring peers. You do have to keep in mind it is based on a double-cab ute, resulting in an overall length of 4785mm. Fortunately, it isn’t quite as lengthy as the Triton (5280mm).

The premium interior of the Exceed can come across as a bit of a contrast in this respect. Ride quality, steering character and effort, and the power delivery is very similar to the Triton. It’s all a reminder this vehicle is not intended to be a half-arsed softroader; this is a proper off-road vehicle – we’ll get to the off-road performance soon.

On the road the engine is fairly noisy, recording 52dB at idle and 84dB under acceleration. It’s not the loudest engine in the ute segment but it is if you compare it to some of the gentler large SUVs on the market, even with their diesel options. Ride quality isn’t too bad, again, for a ute, but it is quite harsh for a family car. As you might expect, handling and enjoyment in the bends is limited, with long-geared steering resulting in cumbersome tighter turns, while the tall-walled tyres provide little response. 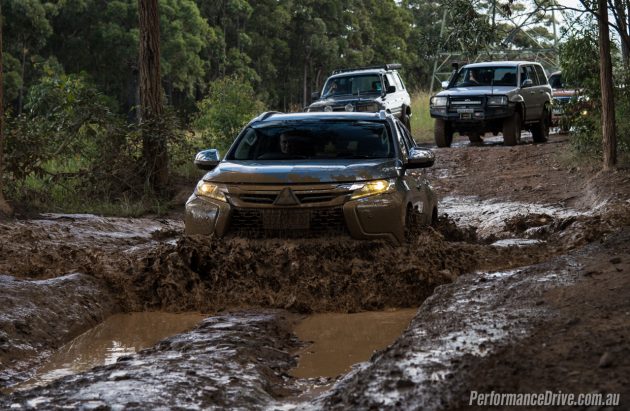 By now you’re probably getting a negative vibe from the drive experience, right? Well, we’re doing this on purpose. To appreciate the Pajero Sport, you need to be off the tarmac and in the bush. This is where the Paj Sport was designed to be. We’ve always had a soft spot for the previous Challenger because it was such an outstanding package off the road. Can the same be said for this new model? We decided to team up with some off-road enthusiasts from the office for a bit of a 4×4 adventure.

Selecting four-wheel drive is easy. Twist the dial around to 4H, or 4HLc (locked centre diff), or low-range 4LLc, according to how serious the surface is. Although it might be difficult to thread through an inner-city street, the Pajero Sport is surprisingly agile in the bush. It stands at a relatively narrow 1815mm wide (same as Triton), resulting in minimal cringing moments when driving through overgrown tracks or in small gorges. 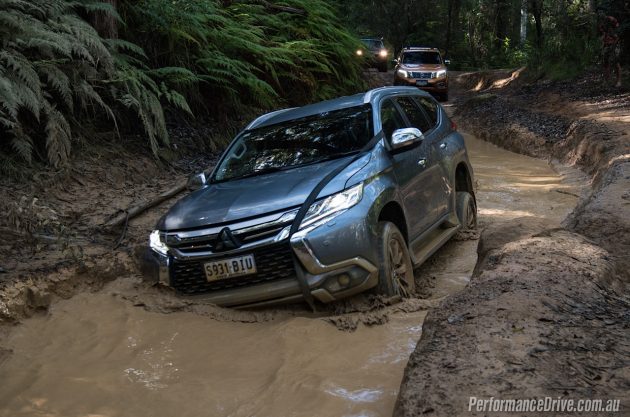 Going for the factory tow bar option is the way to go if you’re planning to off road this beast, as it’s a good piece of protection if you manage to bottom out on the 24.2-degree departure angle. Approaching sudden inclines gives you more confidence, with its 30-degree approach angle, however, 218mm of ground clearance doesn’t set any benchmarks in this class.

Interestingly, the approach and departure angles aren’t as favourable as those on the old Challenger (36, 25). The ground clearance is also down from 220mm. Luckily, anything you do snag underneath isn’t likely to be bothered by bits of Earth. There are protection plates covering the important components, and where there’s not, you’re just going to rub the belly on the chassis. 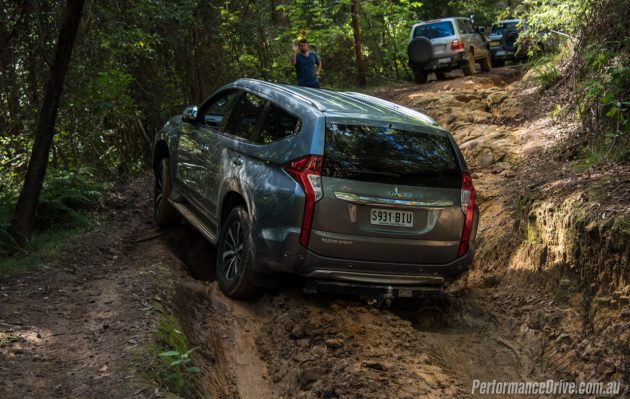 We did notice the locking differential lagging a little during our test. It usually took a moment of wheelspin before the left or right wheel hooked up, or the front or rear axle, depending on the situation. Interestingly, the Nissan Navara we also took along for the test managed to get through the really tough stuff a little easier. We don’t know if this had anything to do with the Navara featuring leaf springs, but we did notice the locking rear diff in the Navara responded much quicker when put under serious pressure.

Overall, the main elements that slowed the Pajero Sport’s progression were the 265/60 tyres, and the annoyingly low side steps. We think Mitsubishi has purposely gone for slightly better and more comfortable on-road manners compared with the old Challenger, but in doing this it has lost some of its ruggedness we think. Regardless though, it is still a superb all-terrain-conquering vehicle in the world of today’s SUVs. And interestingly, despite driving alongside some highly modified off-roaders, this example managed to walk away from our test without a scratch – it’s ready for anything. 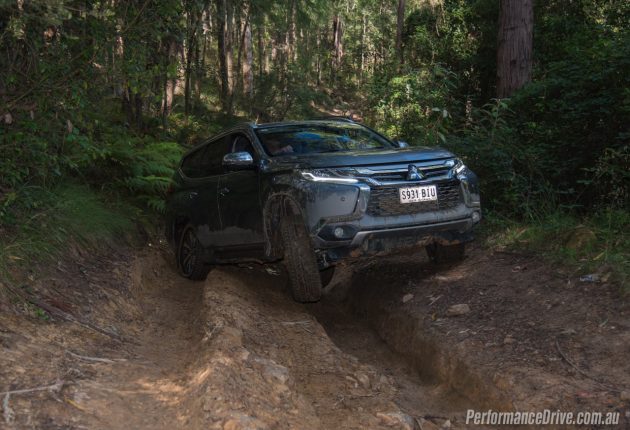 If you’re in the market for an SUV because you like a high driving position and the practical load space and convenient load height, we suggest you check out the plethora of others on the market at the moment before signing for the Pajero Sport. If, on the other hand, you want an SUV because you want to get out into the wilderness and explore, the Pajero Sport is the ideal companion. It is outstanding off road, and with Mitsubishi’s credible build quality and reliability – and five-year warranty – you can confidently depend on this machine no matter where you are on this massive continent.