CUVs (compact utility vehicles) are the hottest thing in Australia since sliced bread. Want proof? All but a small handful of manufacturers have experimented in the segment, to varying degrees of success. Now, Fiat wants a bit of the action with the new 500X. 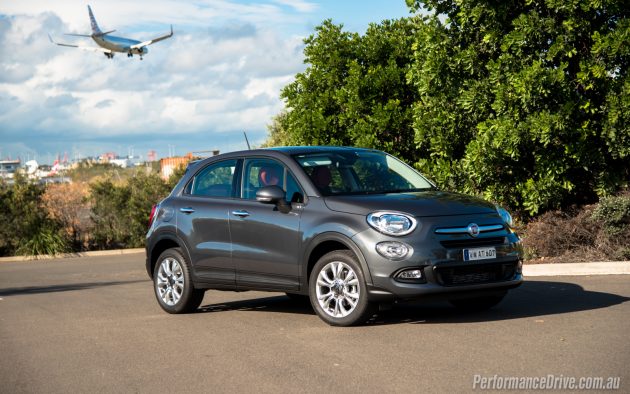 In order to secure its piece of the pie, the 500X has been developed on the success of the 500 city car. The X in the name signifies Fiat’s intention to market the 500X as a crossover model, or “lifestyle” vehicle in its words.

Fiat offers the 500X in four variants, from the city-slicker Pop variant to the Cross Plus off-roader. On the entry-level Pop model, there’s air-con, cruise control and 16-inch steel wheels as standard. Upgrading to this Pop Star variant gets you 17-inch alloys, body-coloured door mirrors, fog lights, climate control, and a 5.0-inch infotainment system with Bluetooth connectivity.

Both the Pop and Pop Star use a 1.4-litre turbo-petrol engine producing 103kW and 230Nm, connected to a six-speed dual-clutch automatic. The Urban and Cross Plus variants receive a 22kW jump in power, and the latter is fitted with an all-wheel-drive system and nine-speed automatic, along with rugged body panels.

The 500X actually shares its underpinnings and many components with the Jeep Renegade, which we’re a little wary about, so let’s check out how it performs. 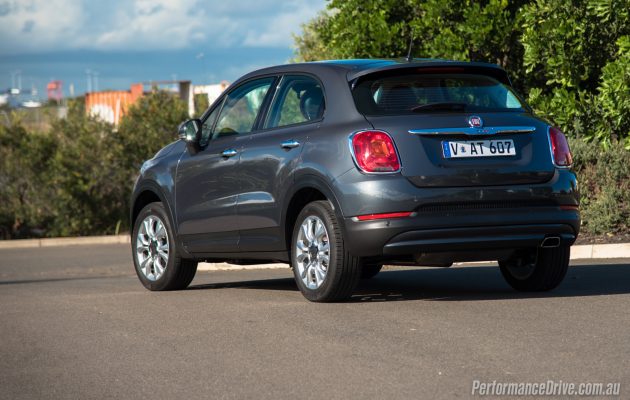 Fiat has drawn many similarities to the 500 in the front fascia and hatchback-like proportions of the body, making it look familiar but unique for the class. There’s no denying the 500X Pop Star looks like a bit of an automotive, well… popstar.

With its shiny chrome-accented grille, door handles and light surrounds, combined with an array of curvy bonnet, roof and side profile design lines, the little Fiat looks a bit fancy. We’re not here to judge the styling, only to let you know that some people will love the 500X’s looks, and some won’t.

Stepping inside, the interior is far from boring. Your retinas are blinded by the bright red accents on the seats, door sills and armrests. There’s some carbon-looking plastic weaving its way through the centre console and gear lever, and grey glossy plastic that makes its way from the centre console to the passenger’s air vent, housing twin gloveboxes. All of the round buttons for the A/C and MMI system have a chrome plastic finish, which add to the fashionista aesthetic.

What about the feel of the interior? As we found out earlier this year, the Jeep Renegade has some nasty plastics making up a majority of the cabin. Well, although we admire Fiat’s design flair, the overall fit and finish is cheap in some areas. The steering wheel is a notable exception, but the scientifically-approved ‘scratchy plastic test’ can’t help but illustrate the amount of hard textiles used. 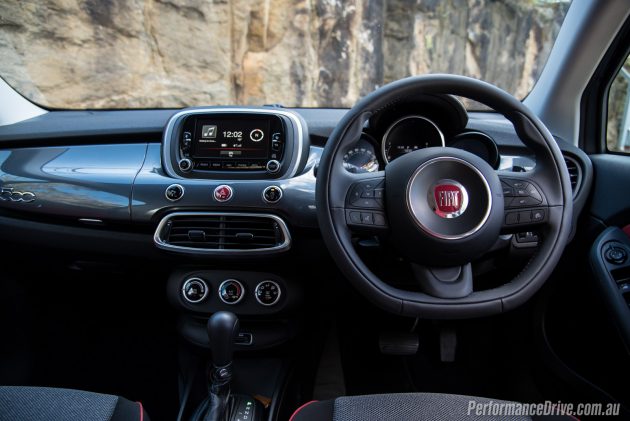 The seats are comfortable though, offering a nice driving position, and covered in a hybrid of red PU/leather and soft and rugged black and grey fabric. The seating position is actually quite low considering the 500X’s perched up stance, and combined with a high dashboard, the 500X might not get the tick of approval from smaller drivers.

Ironic as it is, the 500X offers more headroom than legroom for passengers. There’s a modest amount of space in the rear, bigger teens and even adults won’t complain too much on short to medium drives, but the 500X is lacking in rear legroom in comparison to some of its rivals – even the in-house Jeep Renegade rival offers slightly more rear passenger space.

Something you may hear complaints about is the lack of visibility out of the cabin. The bulky C-pillars and tiny rear window can prove problematic in busy traffic and tight city conditions. The 500X is small though, so there’s not much of a problem getting into parking spots.

The same applies for the boot space, which, at 346L, is just under the Jeep Renegade’s 351L but remains behind the pack. The Mini Countryman, for example, has a 450L boot.

Boot space is hindered by obstructive side panels, and there isn’t much depth to it, despite only housing a space-saver spare tyre underneath. With the rear seats down you’ll get a few surfboards or bulkier items in the back. Thankfully, there’s an adjustable boot floor which allows the rear seats to fold completely flat, offering more practicality.

So how much kit do you get for your $32,000? On the safety front, there are seven airbags, a reverse camera with sensors, blind-spot monitoring, forward collision and lane departure warnings and hill-start assist. In terms of everything else, there’s a six-speaker stereo system, touch-screen infotainment system with navigation and voice recognition, keyless entry, climate control, electric handbrake, leather on the wheel and gear lever, chrome exhaust tips and cruise control. All up, a good level of specification for your money. 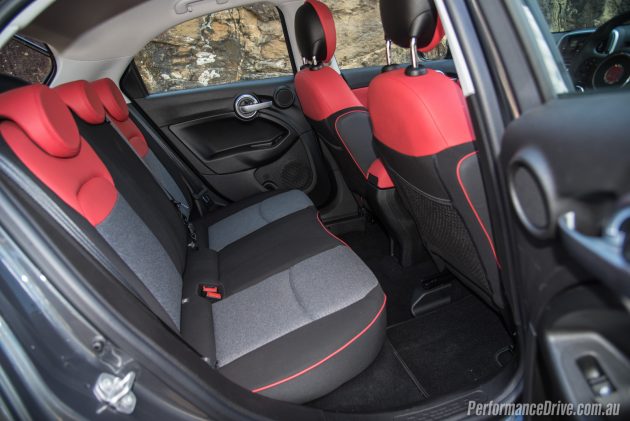 As mentioned, the Pop Star is powered by Fiat’s 1.4-litre turbocharged MultiAir four-cylinder, which produces 103kW at 5000rpm, and 230Nm from 1750rpm. The engine is truly a highlight of the 500X, with a likeable perkiness and modest power delivery. While there’s a bit of turbo-lag low down, when the engine picks up pace it becomes lively. Provided you’re not hauling the family around, it will pick up pace reasonably quickly. We timed 0-100km/h in 9.90 seconds, which, strangely, is quicker than the identical-weight FWD 103kW Jeep Renegade we tested earlier this year (10.54 seconds).

It’s just a shame Fiat has mated such a capable powertrain to such an under-performing DCT transmission. Dual-clutch transmissions traditionally shift with urgency, maximising power to the wheels with short shift times. The DCT fitted to the 500X however behaves erratically, and offers nowhere near the quality of a VW or even Hyundai-derived DCT. It’s far less intuitive than other DCTs, and has a bizarre habit of downshifting as soon as you go anywhere near even the slightest of inclines.

There’s a mood-selector knob that offers auto, sport and traction settings. Sport sharpens up the throttle response and makes the engine more willing to rev out to the redline, while quickening up the steering and gear shifts. The traction setting goes for a more gradual power delivery suitable for snow and mud, with a comfort steering calibration and moderate auto setting. The knob seems a bit gimmicky seeing as though the 500X has 103kW and front-wheel drive. Alas, more variety can never be a bad thing.

Fiat’s ADR combined cycle claim of 5.7L/100km perplexes us, as we weren’t able to get a figure below 8.2L/100km in mixed driving conditions. 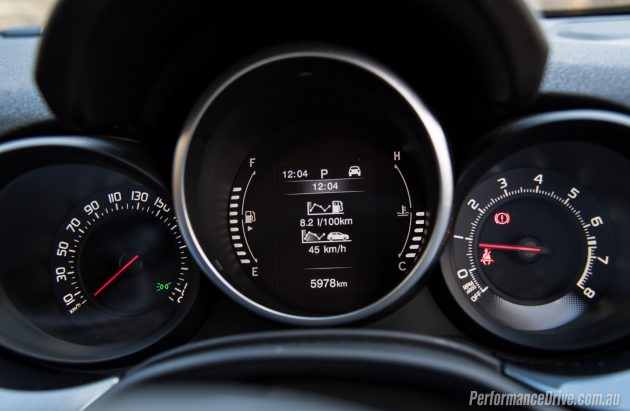 While its compact proportions and high-riding driving position will prove popular, the ride quality may have some buyers looking elsewhere. There’s minimal body roll in the corners, with a focused and urgent steering setup ready to change directions as quick as a fly, like the 500 donor car, but this means the suspension movement is quite limited and harsh. Even minor road bumps are transferred through to the cabin, resulting in a very fidgety and bobby ride. Out on long country roads, it’s almost intolerable. Luckily, the seats are comfortable and do absorb a lot of the impact for you.

Dynamic driving is where the Fiat really impresses. It’s far from a sports car but it does offer more excitement than its exterior design might suggest. The front axle does well to maintain front end grip throughout a corner, even under power, and the little 500X can hold up to quick directional changes without becoming overwhelmed. We think it is one of the best-handling vehicles in the class in terms of overall agility, cornering grip, and stability at the limit.

As mentioned, Fiat does offer an all-wheel drive option, so if you’re planning any off-roading, the Pop Star isn’t the variant for you. If your lifestyle revolves around an urban environment, arguably where most 500Xs will live, the two-wheel drive Pop Star is a nimble urban run-around.

We get the impression that a lot of Fiat 500X buyers will be making the choice with their heart, rather than their head. When you consider the 500X is produced by an Italian manufacturer, it plays all too well into the Italian archetypal marketing of passion above all else.

There’s no denying the 500X is a unique entrant in the CUV market, and this quirkiness will be enough to get it over the line for many buyers. Fiat is great at this, but it’s also known for packaging some unwelcome surprises into its cars, and the brand doesn’t have the best history with reliability. Overall, we’d suggest you check out some of the more comfortable and known-to-be-reliable Japanese rivals before finally signing the dotted line on one of these.