If you love the idea of the awesome Golf R but you’re not a fan of the insurance premiums or you can’t convince the other half that you need one in your life, the 2015 Volkswagen Golf 110TDI R-Line could be the perfect substitute. 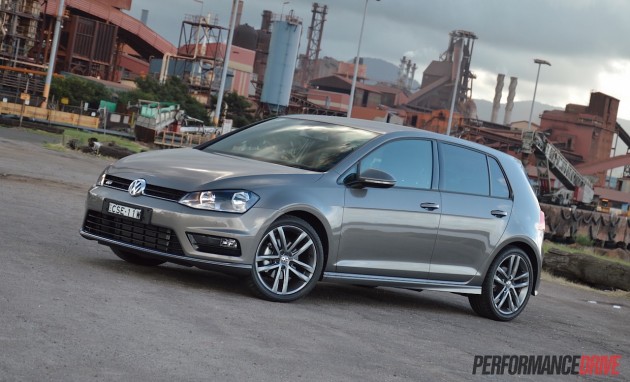 Volkswagen seems to be really pushing its performance/sporty presence in the industry, like many manufacturers at the moment, with the R-Line kit now available for various showroom models including the Beetle, Tiguan, and even the Touareg.

For the Golf, the R-Line is an option that can be applied to the Highline versions of the 110TDI and 103TSI. It adds $2200 to the price tag, but it gives the otherwise humble and conservative hatch a saucy personality via a bodykit, 18-inch wheels, and various equipment upgrades. Here we’re testing the 110TDI version.

Under the bonnet the regular 2.0-litre turbo-diesel remains untouched. It, rather quietly for a diesel, churns out 110kW and 320Nm. The latter of which is the key ingredient to the genuine sportiness of this vehicle. More on that later though. Price as-it-sits starts at $37,490 (up from $35,290 without the R-Line pack). 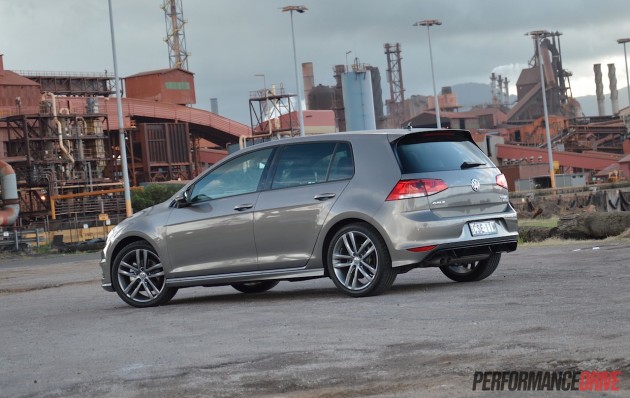 By now, most Australian buyers recognise the VW Golf as a practical, economical, and mostly reliable hatch. It sits in the popular segment with whiffs of premium steaming from it, with its Germanic build quality and efficiency, perhaps giving it a leading edge over its Japanese rivals. For the Mk7 Golf, it’s no different.

It’s still very practical, offering more than satisfactory comfort for five adults, with 380 litres of cargo capacity and flat-folding rear seats. With the R-Line package you get unique sports seats with surprisingly burly side bolsters to hold you in, and matching seats in the back dressed in a sporty two-tone trim. The seats don’t really intrude on the Golf’s spacious atmosphere, which means you won’t have to work too hard to convince your other half that you need – at least – the R-Line option for your next runabout.

There’s also an R-Line steering wheel, similar to the one in the Golf GTI and Golf R, and sporty alloy pedals, and a few R-Line logos spread around the place. Aside from these touches, the rest of the interior is pretty much the same as the Highline grade.

This means you get a clutter-free dash layout with very straight-forward functions and instantly-fathomable buttons and controls, mostly in square or rectangular shape. You also get a clever 5.8-inch touch-screen interface that can see you finger coming before you actually touch the screen. It’s not science-fiction. It merely uses sensors to detect an approaching finger so it can pop up new menus to anticipate your desired selection. Satellite navigation is standard, as is a rear-view camera and full connectivity with Bluetooth, USB, and SD card support.

After a big drive in this version, we faced no major issues with the interior ambience. Comfort levels don’t diminish even after a long drive, and the driving position is as good as it gets in this segment. The driver’s seat is height adjustable, and the steering column offers rake and reach adjustment to ensure the perfect fit. 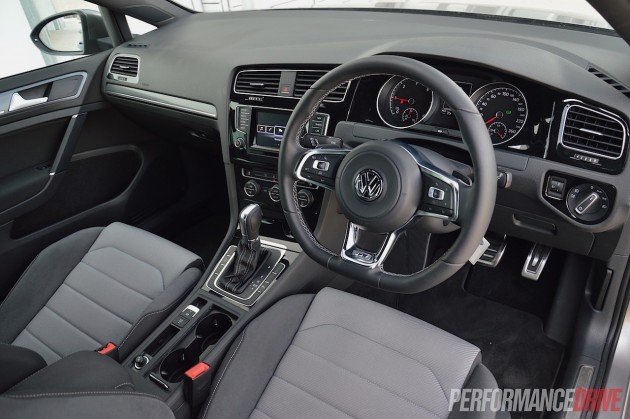 So, it’s a little bit different visually on the inside and outside with the R-Line option. Do you get anything substantial in terms of mechanical enhancement? You don’t get any engine tuning but it does come with bespoke sports suspension and a unique, progressive steering setting with the R-Line.

The regular Golf is already a very good handling vehicle, one of the best in the class. It’s surefooted, planted, and very stable even at high speed. Of course, one of the benefits of buying a German vehicle is the fact that it has been tested and engineered to drive at high speed out on their autobahns. This means anything under the Australian-standard 110km/h limit is a walk in the park.

With the R-Line sports suspension and more direct steering, you get to experience the underlying engineering sooner. The moment you point the nose into a corner the Golf tips in and remains stable and devoted to the line you’ve taken. In our opinion, the sports dampers used in the R-Line are some of the best in the business. They offer a nice, taut, rubbery yet absorbent operation, so you can tackle bends while smashing over bumps and the wheels will always remain planted on the road.

As a result, grip levels are enormous. We simply couldn’t provoke any understeer in dry conditions no matter how hard we tried, and even oversteer requires serious steering wheel and pedal tactics, like punching in cheat codes on a computer game. And if you get it right, at most, you get a gentle hip wobble until you’re back on track. It’s a superb setup. In fact, when you really wrestle with it out on your favourite mountain road you come to realise it out-handles the engine and drivetrain.

There’s so much grip, stability, and control, the engine can’t keep up. In other words, the least aggressive element of this formula is the engine. But that’s not necessarily a bad thing. It’ll run out of puff before the chassis or grip runs out, which means it is very safe. You can tell it can handle a lot more power too; as in the case of the GTI and brutish Golf R.

As for the engine, there is a tiny bit of turbo-lag, but so long as you’re in the right gear it offers pleasing mid-range torque and off-the-mark acceleration. Flatten the throttle and it’ll wheelspin through first gear and into second, and both wheels too thanks to the standard electronic-locking differential. Doing exactly this we timed 0-100km/h in 8.3 seconds. We’ve always agreed that anything under 8.0 seconds is lots of fun. In the case of the 110TDI it tends to run out of steam in the top end, understandably, so it just misses out on the 8.0 mark. But it’s not enough to mark it down; it actually feels a bit quicker than 8.3.

Overall, this is a great all-rounder machine. We returned an average economy of 6.1L/100km during our week, involving mixed driving conditions – you could get it closer to the official 4.9L/100km average with more consistent driving, commuting and such – and then when the weekend comes you can have a little play, or go for a tour into the country and enjoy the sports suspension/steering. 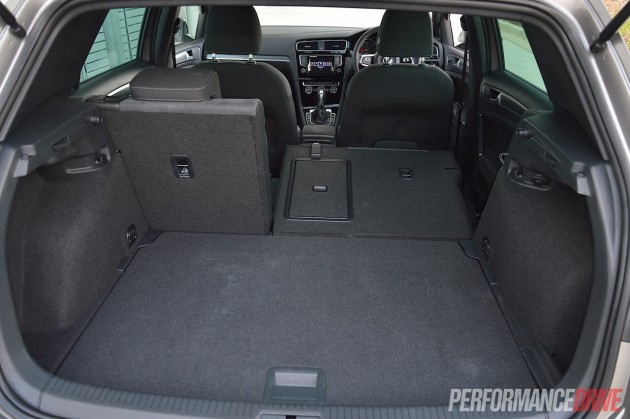 It’s the perfect everyday car in many ways. You get excellent economy with long legs for highway cruising, useable torque so you can punch through traffic and zip down inner-city streets, and spirited enough handling that it can stir your emotions if you want it to. Best of all, it’s as practical as the Golf hatch gets. If we were purchasing a Golf 110TDI, there would be no instrument in the world that could measure the time it took for us to think about ticking the R-Line option box. For car and driving fans, it’s a must.

CONS:
– DSG auto delays in between D and R, and taking off
– One of the lowest power/torque outputs in this segment
– Priced daringly close to the brilliant GTI 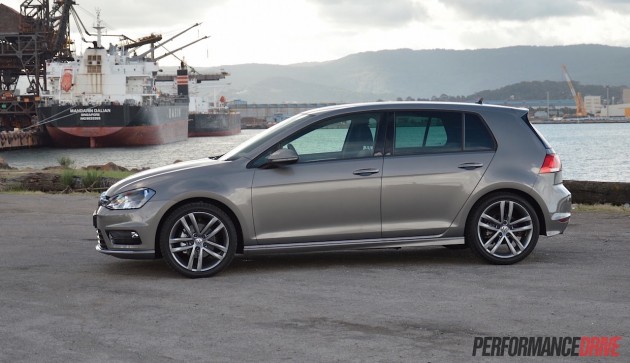