The 2015 Holden Cruze SRi is being marketed by Holden as a practical mid-sized, economical commuter, while offering exciting driving dynamics when the mood strikes. So, how much of this is true? 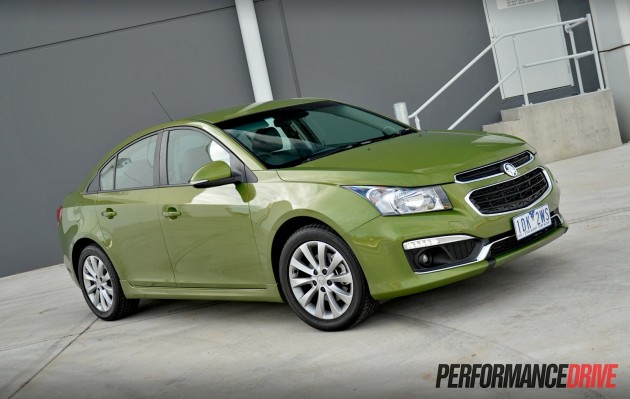 General Motors has much to thank the Cruze for. A few years ago when the market for big, thirsty vehicles dried up following the financial collapse, sales of GM’s compact sedan/hatchback remained at a healthy level.

The evidence is ever-present on Australian roads too, with the Cruze being snatched up as one of Australia’s favourite compact offerings. In January 2015, the Cruze was fourth in its respective market segment, behind the Mazda3, Hyundai i30 and Toyota Corolla, yet overshadowing the likes of the VW Golf and Ford Focus.

Earlier this year a facelift was applied to the popular runabout, giving it a new face, updated technology, and a freshened up interior. Prices were mostly left untouched, except on the higher-end variants which saw a $250 rise. For this SRi manual sedan, you’ll need to fork out $23,140 (excluding on-road costs). 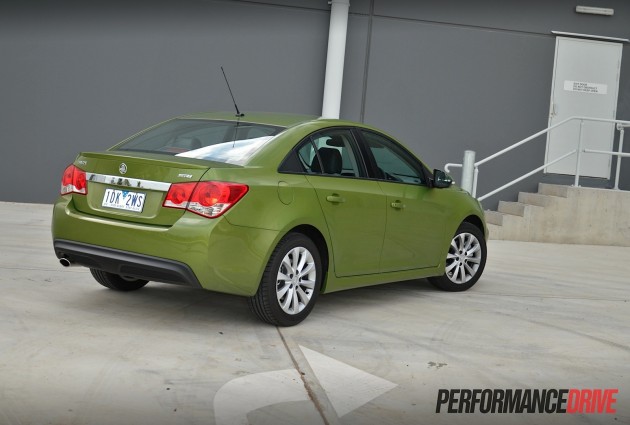 The 2015 Holden Cruze SRi has received some special touches from the guys and girls at Holden, with a redesigned twin-grilled front façade featuring a new set of LED daytime running lamps. Beauty, obviously, is in the eye of the beholder, but it’s hard to argue the updated front end has gifted the Cruze with a much more serious appearance than the previous version. Having borrowed many design cues from the latest generation Commodore and Barina models, there is more of a sense of continuity in the design language used throughout the Holden range now.

This particular Cruze receives Holden’s ‘Jungle Green’ paintjob, which is definitely one of the more, erm, striking colour options. The bodywork now features more sophisticated lines running from the headlights and wheel arches that make their way up the side profile, adding to the fairly refreshed appearance.

Inside, the interior is very on-point for the money Holden is asking. The seats are fairly bulky but very comfortable nonetheless, and the Cruze does a very good job of maximising cabin space, despite the compact exterior proportions. There is the usual mix of silver plastics meeting black plastics on different angles, and also a layer of fabric used across the door panels and parts of the dash which add to the otherwise budget-looking decor.

Front passengers are treated to satisfactory headroom and legroom, although a footrest would be nice for the driver. The rear passengers however might be a little cramped if the driver is taller than six foot, as the sloping design of the roof means the rear of the cabin can feel a bit cramped. The boot space is a feat of engineering in the Cruze. At first glance the boot in no way matches the proportions of the car. But at 445 liters, it’s huge. It’ll happily swallow a family-sized luggage set.

As with all variants, the SRi comes with GM’s 7.0-inch MyLink touch-screen system. Navigation is an optional extra. The MyLink system is straight forward to use, but in 2015 it is beginning to look dated in our opinion, and at times it can be counter-intuitive and a bit slow to respond.

If you’re looking to buy a safe small car, the Cruze has passed the best and only test. It has received a five-star ANCAP safety rating. The SRi comes packaged with six airbags, stability and traction control, and rear parking sensors as standard. Parking the Cruze is not difficult either due to its compact size, however, visibility through the back is partially limited due to the sloping roof and the height of the rear seats. 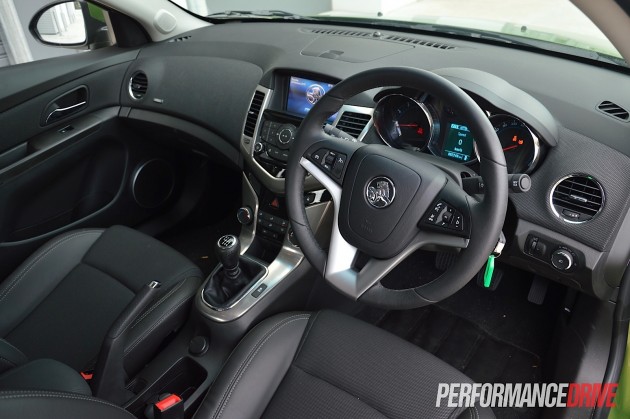 While the downsize and turbocharging trend has worked for so many companies in the past, this particular engine feels as though there is a lot of development and testing that still needs to happen before it can compare against the more competitive rivals. For example, during low speed, second-gear cruising – a regular part of the low-speed city commute – the Cruze’s engine offers up almost zero power up until the 2200rpm mark, by which time the turbo has spooled up and it takes off. For inexperienced drivers, this may intimidate at times due to the irregularities in the power band and delivery.

There is more fine-tuning needed to improve power delivery we think. Whether time or money was a constraint, it didn’t happen. Fuel consumption is one of the biggest victims of this, with the claimed figure of 7.4L/100km translating to more like 9L/100km due to the working you need to put in to keep it revving.

The Cruze only starts to redeem itself when the traffic thins, the road gets curvy and the pace picks up. Surprisingly, it loves the bends. The engineers over at Holden have optimised the suspension and chassis to be forgiving on the bumpy stuff, and exciting enough for any casual driver. And we think it has worked. Riding on a set of 17-inch alloys, there is high levels of grip and relatively low body roll, and the front end feels eager to turn in. The platform also seems quite confident and composed during heated driving.

The electric steering is far from sports car level, but for a city cruiser there is an adequate amount of feedback between front wheels and the driver. There is no denying the car feels bulky, but the chassis does enough to make the car feel lighter than its 1414kg weight.

The overall driving experience and complete package doesn’t quite match the rivals, with the Mazda3 being the first superior contender to pop into our heads. This simply feels a bit old and a bit tired, especially with the 1.6 turbo engine. In terms of driving, we’d recommend checking out some of the more up-to-date competitors before signing off on this one. 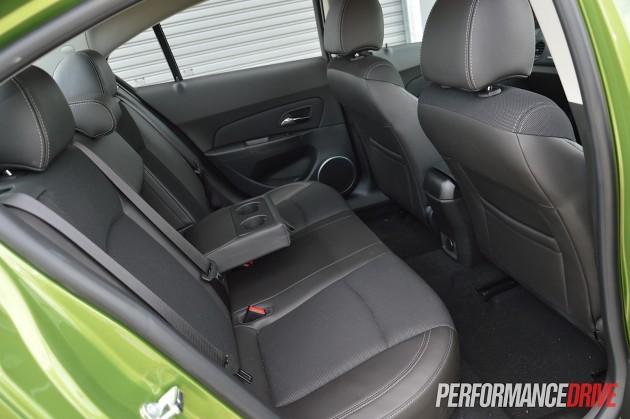 The 2015 Holden Cruze SRi is a mildly updated (mostly aesthetic) urban car that will likely continue to be a hit with younger demographics, and parents looking for something safe for their kids. The Cruze comes with the familiar Holden badge and the brand’s capped-price servicing for three years or 60,000km. It is coming up against opposition that offer five-year/unlimited kilometre warranties like in the i30, or the three-year/unlimited in the Mazda3.

In such fierce competition, the Cruze needs to go above and beyond in all aspects to compete with the established usual suspects. In some ways it comes close, and in other aspects it falls apart. The strong points are practicality, surprising driving dynamics and safety. But these are overshadowed by an unrefined powertrain and overall lack of refinement when compared to the competitors. The Cruze has been relatively unchanged since its introduction to the market in 2008, and as a result it feels dated and below par in our opinion. 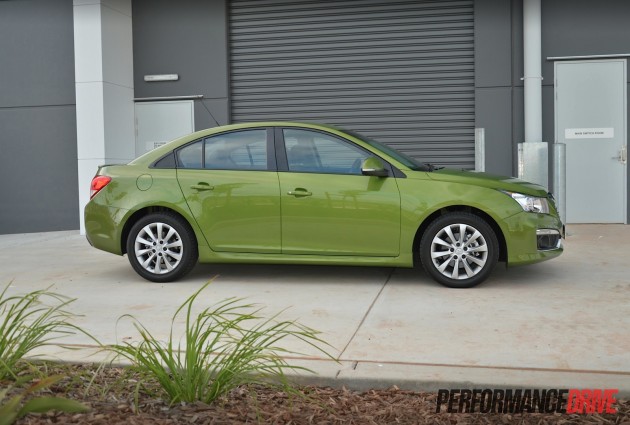 Holden brand to be killed off, shift to Chevrolet – UPDATE February 16, 2020