Ford Australia has today announced the new 2015 Ford Mondeo, available in both sedan and wagon format, will be priced from $32,790 when it arrives in showrooms from May. 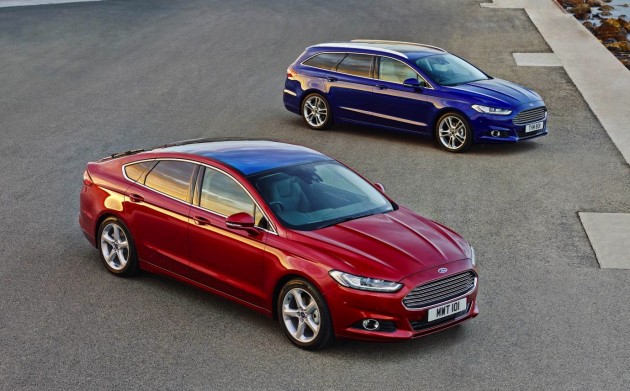 The lineup will include Mondeo Ambiente, Trend, and Titanium. For those who really want to impress the neighbours, the Titanium model comes with a panoramic glass roof, sports seats, a power tailgate (wagon only), signature interior lighting, a sporty bodykit, 18-inch wheels, adaptive suspension, and dynamic headlight levelling.

Engine-wise there’s the choice of two engine types; a 2.0-litre EcoBoost, which comes in both 149kW and 177kW outputs, and a 2.0-litre turbo-diesel that produces 132kW and 400Nm. Both engines come with six-speed automatic as standard.

The new Mondeo will also become the first Ford in Australia to feature nine airbags, which includes inflatable rear seatbelts as standard – a first for a mid-size vehicle priced under $50,000. Other safety items include dynamic stability control, emergency brake assist, and Ford’s SYNC2 Emergency Assistance system which can alert emergency authorities automatically and relay the vehicle’s GPS location in the event of a rollover or severe accident.

Ford boasts that the 2015 Mondeo “is more fuel efficient than the Camry Hybrid sedan, delivering a combined fuel figure of 5.1 L/100km versus the Camry Hybrid’s 5.2 L/100km”. 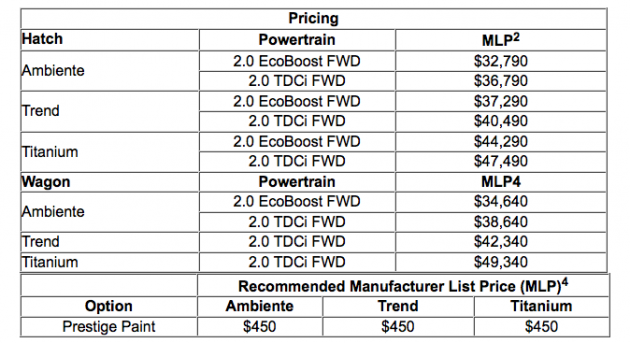