What is the best value seven-seat car on the market? You could be staring right at it. Introducing the Fiat Freemont Crossroad. It looks like a bit of a meanie but boy is it practical. 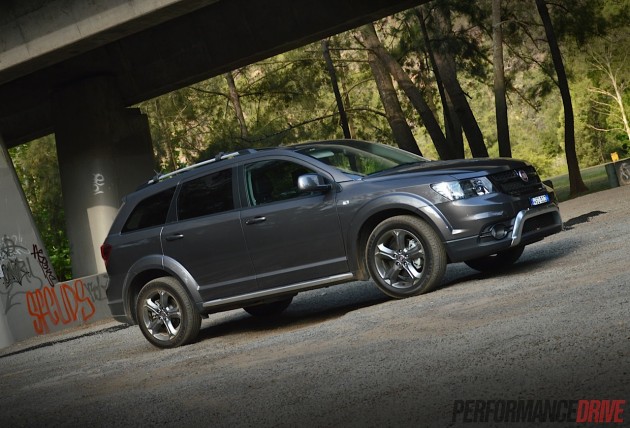 The Fiat Freemont Crossroad has the potential to be one of the most appealing seven-seat SUVs on the market at the moment, in terms of sheer packaging and affordability. But there are some sacrifices. For one, it’s based on the old Dodge Journey from 2009, which itself was based on an old layout developed by Mitsubishi and Daimler-Chrysler back in 2004. Secondly, it’s only available in front-wheel drive – not the ideal layout for this potent V6 version.

To spice up the Freemont range otherwise powered by a 2.4-litre four-cylinder producing 125kW, Fiat has captilised on its close connection with Chrysler and wedged the 3.6-litre Pentastar V6 into the engine bay. It produces 206kW of power and 342Nm of torque. It’s only available with a six-speed automatic. Fiat did offer the Freemont (non Crossroad variants) with a frugal 2.0-litre turbo-diesel, but it’s no longer available.

Now to one of the most impressive parts of this vehicle; the price. When you’re reading about all of its features below and looking at the jumped up, slightly sinister and somewhat imposing exterior, think of this number: $36,500. Yep, all of this is available from just $36,500 (excluding on-road costs). That’s only $4500 more than the less-equipped and less-powerful 2.4 ‘Lounge’ variant. 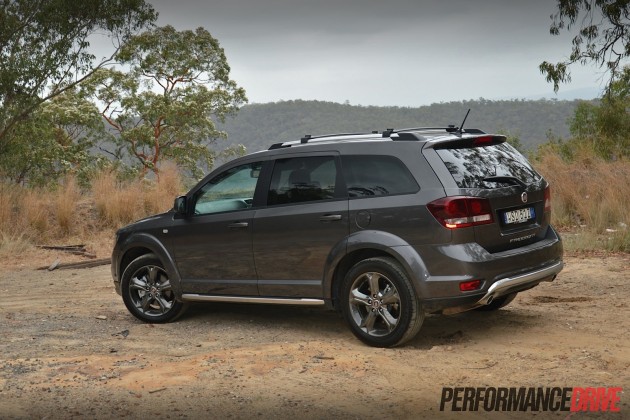 The Crossroad is the only seven-seat variant in the Freemont lineup. Stepping inside, the interior reminds you of those big American SUVs, with lots of leather and splashes of chrome, an abundance of storage solutions and convenient cleverness, and three rows of useable seats all lined up like it’s a luxury airliner.

The front seats are multifunctional. You can lift up the lower section of the seat to expose special cubby holes underneath for storage. Similar cavities are placed in the floor of the second row as well. These are great for wet items like swimming gear and towels. And speaking of the rear seat, the outer seats have their own pop-up booster sections for the kiddies.

Surprisingly, it is just as impressive in the third row. Adults can actually fit back here thanks to little cutaways under the middle section of the second row, allowing your feet to slide under. On top of that, the entire second row bench can be adjusted to slide forward or back, opening up more legroom.

There are air vents for all three rows, and there’s even little hooks on the backs of the front seats that are perfectly distanced from the floor to secure a few shopping bags. It’s so practical in here. In fact, Fiat says there are 32 different seating configurations and 25 storage compartments, and up to 1500 litres of cargo space (784 litres in five-seat setting). You can really tell Fiat has put this vehicle together with active families in mind.

There are some obvious build quality and fit and finish flaws around the place though, with odd panel gaps and interior plastics not matched up neatly. However, its ability to genuinely accommodate a family is unsurpassed for the amount of money you’re spending.

Although all of this might sound good so far, it does gets better. Fiat not only borrowed the Pentastar V6 from Jeep and Chrysler, it borrowed the excellent 8.4-inch Uconnect touch-screen interface as well. This unit is one of the better systems we’ve come across in this segment. The screen is big and all of the menus are easy to navigate, with large touch ‘buttons’ clearly marked so you know where everything is.

As standard on the Crossroad, Uconnect is entwined with DVD, MP3, USB, and SD card compatibility, while tunes pump – and we mean pump – through an Alpine surround sound stereo system powered by a 368-Watt amplifier and sub-woofer. The sub is conveniently mounted out of harm’s way in the sidewall of the cargo area. 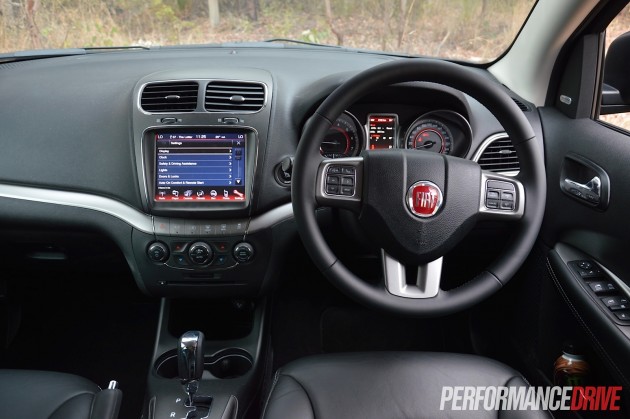 Families that are looking to buy a seven-seat crossover probably aren’t going to be interested in handling dynamics or performance. Even still, it’s good to know there is a 206kW V6 up front which can easily haul the family up long hills and safely overtake if required.

Of course, the drawback to the power is fuel consumption. Our test vehicle drank so much fuel that we thought it had a leak. The trip computer quoted around 10.7L/100km, however, we could only achieve 400-450km from a 77-litre tank (without going to the warning light).

Part of this alarming consumption rate is the six-speed auto in our opinion. It tends to slur up and down gears and seems undecided most of the time. It also feels like it takes off in second gear, causing you to put your foot down just that little bit more to get going. At first we thought Fiat should have installed the eight-speed auto that’s normally paired to the Pentastar V6, except in all Chrysler and Jeep models these use a longitudinal, RWD-based engine layout.

In terms of putting your foot down, it doesn’t take much throttle to overpower the traction of the front tyres. We think this is down to the suspension which is not refined or engineered enough for this amount of power. Upon take off the body tilts back, causing the front to rise. This unweights the front tyres resulting in the perfect conditions for wheelspin. Fortunately, the on-board traction and stability control systems almost immediately intervene.

Around higher speed sweepers and big bends it does hang on quite well, despite the lack of suspension finesse. It rails around, holding its composure with only some body roll. We weren’t expecting this. It leans in a certain degree and then holds. Through tighter bends and slower speed stuff it can be a bit cumbersome, but overall it’s not too bad for a family vehicle. 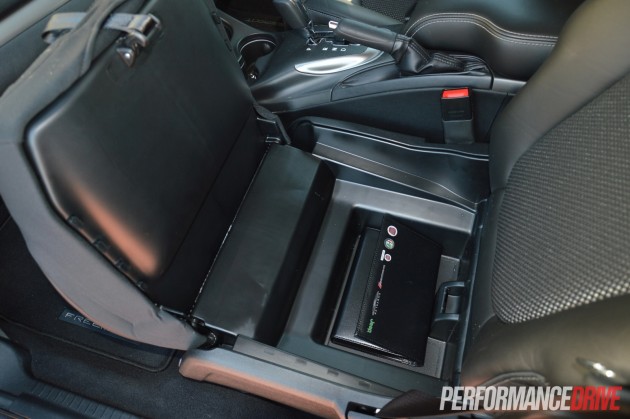 Okay, so there are some imperfections in handling and driving dynamics, and the fuel economy is far from class-leading. But for some reason we very much enjoyed our time with the Crossroad. It’s pleasant to drive out on the highway. It offers plenty of cabin space and a high level of standard features. And that price. Who can walk away from that price? If you’re in the market for a seven-seater, at least take one of these for a test drive. It’s worth a look. 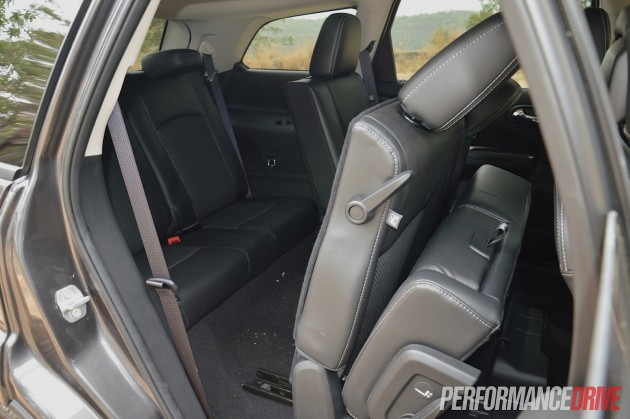