You’re either a Subaru WRX fan or a Mitsubishi Evo fan, there’s little in between. Let’s go over the bar-bones 2013 Mitsubishi Lancer Evolution X five-speed manual to see how things shape up in the red corner. 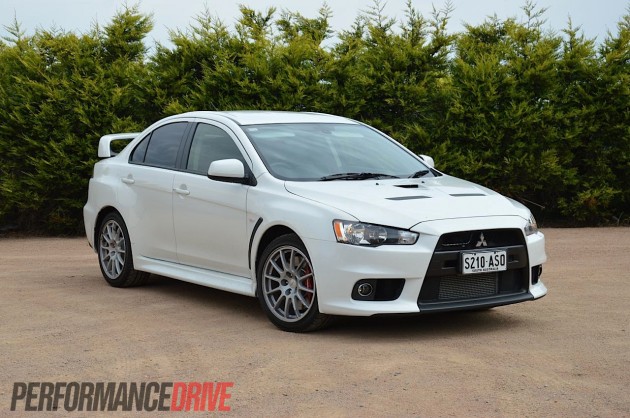 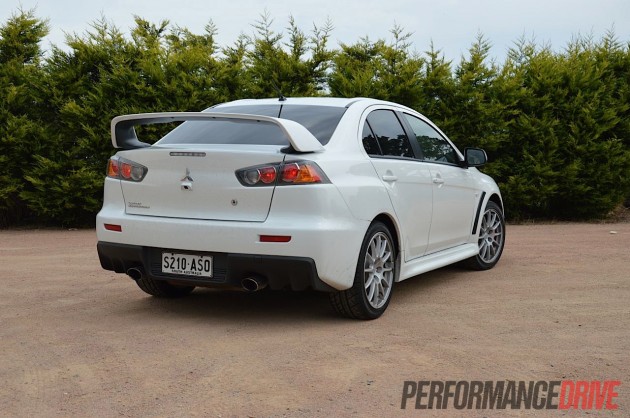 For the model year 2013 (MY2013), the Lancer Evolution X is essentially the same as the previously tested 2012 Lancer Evolution X. For this test we have the no-fuss entry-level variant which comes with a five-speed manual transmission, as opposed to the more popular MR version which gets the TC-SST dual-clutch auto.

The base model comes with the bare essentials in terms of on-board luxuries and trimmings. The exterior also misses out on the racy lightweight BBS alloy wheels that the MR gets, instead, making do with Enkei 18-inch items. It also misses out on the Bilstein/Eibach suspension package and more heavy-duty two-piece Brembo brakes. Such features can be optioned via the Performance Pack ($3000).

Under the skin the same bullet-proof hardware resides in all variants. At the heart of it is a 2.0-litre turbocharged four-cylinder with MIVEC variable valve timing. It produces 217kW of power and 366Nm of torque – down a touch on the Subaru WRX STI’s 221kW/407Nm. 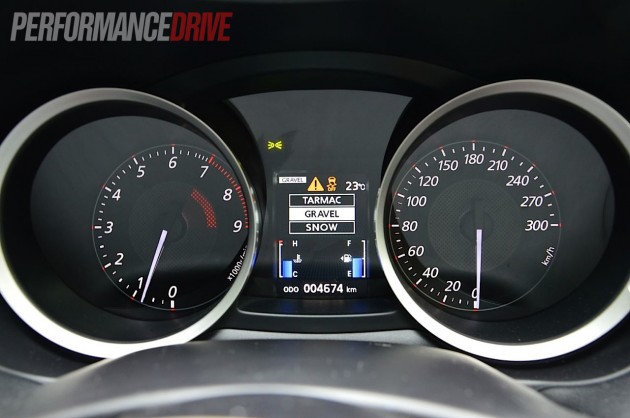 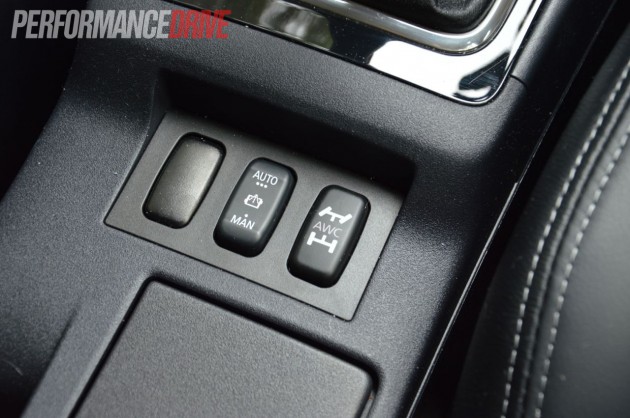 Inside, the base Evo X comes with all the comforts and functions you could possibly need in a focused car like this. For the MY2013, the dash gets a new 6.1-inch (7.0-inch in the MR) multimedia touch-screen audio system bringing MP3 and iPod compatibility. Strangely, there is no USB port on the base model, despite auxiliary/iPod and Bluetooth support. The MR comes with a more comprehensive nine-speaker Rockford Fosgate system.

When you’re driving a Lancer Evolution X, the entertainment system is far from your focus of attention. There’s huge hip-hugging Recaro bucket seats in the front, reminding you of the car’s incredible high performance capabilities. 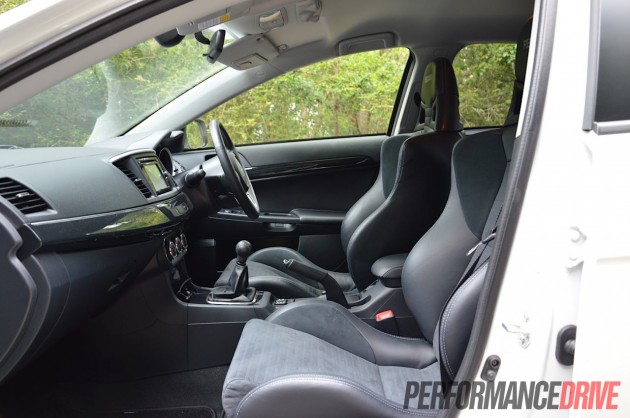 The rear seats are slightly bolstered, featuring a matching two-tone trim. Legroom and shoulder space in the back and front is on par with the regular Lancer sedan, offering good comfort and space.

In the very back, the boot is smaller than the regular sedan, making way for Mitsubishi’s latest ‘RISE’ (Reinforcement Impact Safety Evolution) chassis reinforcements. According to Mitsubishi, the enforcements to the front and rear sub-frame help to increase torsional rigidity by 40 per cent and flexural rigidity by 60 per cent compared with the Evo IX.

Some of these enforcements are covered up in the boot with a large plastic covering. The battery and windscreen washer container is also stored behind the rear seats, accessible through the plastic panel. 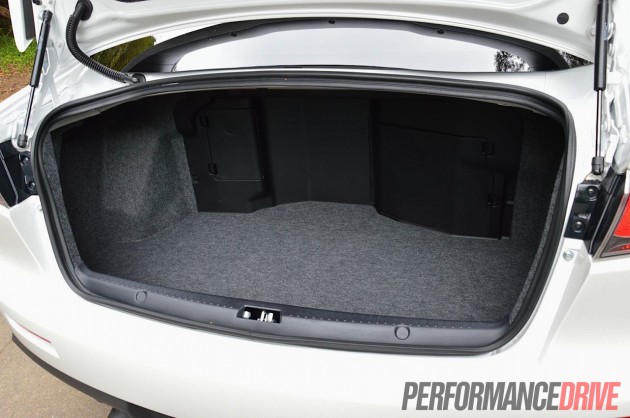 Noticing an Evolution Lancer over a humdrum counterpart is fairly easy. The front end and the rear are complete with very aggressive features. At the front the bonnet has a trio of vents carved into it, while at the back it’s hard to miss the large, somewhat intrusive, rally-stye spoiler.

The rear also shows off a finned diffuser which helps to pull air from underneath the car at high speeds, in effect, sucking the car to the ground and increasing grip and stability. 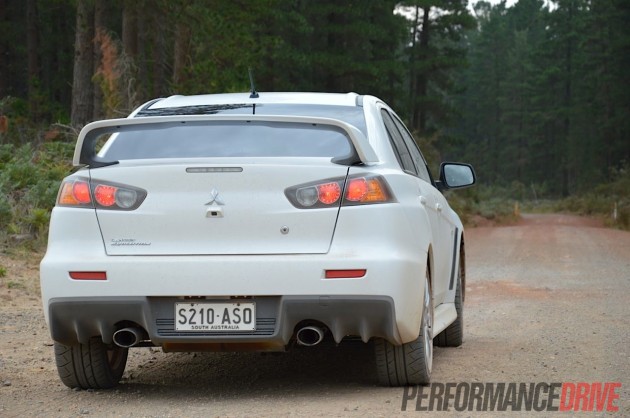 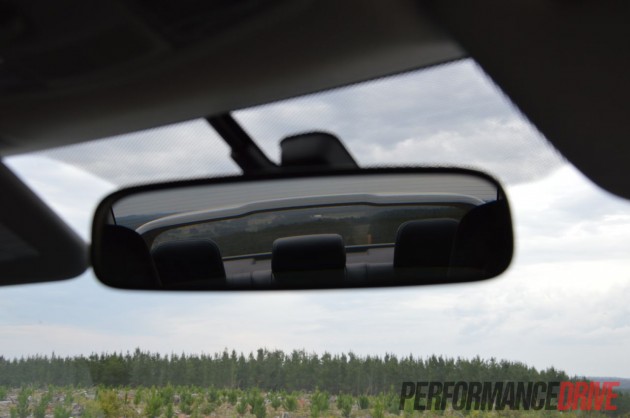 It would be reasonable to expect the top-shelf MR to be the highest performance model, however, thanks to a number of components that the base model misses out on, such as the dual-clutch auto and the Rockford Fosgate sound system, it’s almost 100kg lighter in weight – 1565kg over the MR’s 1635kg. 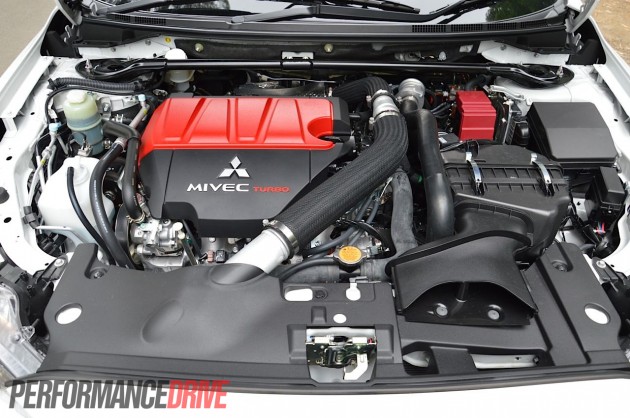 The Evolution Lancer is not just a turbo version of the conventional front-wheel drive Lancer. Engineers spent countless hours on increasing chassis rigidity while also focusing on keeping the overall weight to a minimum. The bonnet, roof, and front guards are all made from aluminium, for example.

Aside from the various body and chassis strengthening measures, the Evo X feels like a solid and safe vehicle on the road. With the all-wheel drive system, as you can read below, the car provides utter competence and composure in all weather conditions.

Australia’s ANCAP safety gurus haven’t actually crash tested the Evolution X, however, all other Lancer models have been given a full five-star rating. 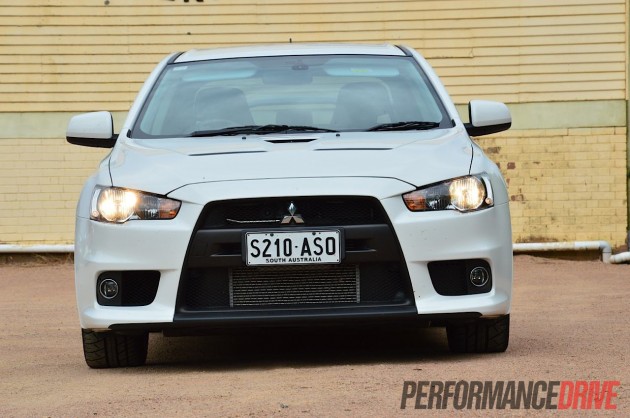 The Evolution X can be driven so hard, it can be an assault on the senses. It’s capable of throwing you around like you’re riding a serious roller-coaster.

To get the most out of it, you really need to ring its neck, so to speak, and enjoy 6000rpm-plus, through every gear. When you do, be ready to give it your full attention and your next direction, as things tend to move on very quickly.

Gears need to be changed quite soon due to the high-ratio gearbox, for instance, requiring around 3000rpm for 100km/h. The steering is touchy and super-direct as well, leaving little time to relax. It’s all developed as a highly strung package, and this engineering philosophy helps to provide seemingly boundless limits.

Speaking of limits, the Evolution X has very little. The Brembo brakes provide good initial bite and awesome stopping performance. After repeated abuse, and even after performing high-speed tests, they showed no sign of fade or heat dissipation issues during our test.

Even without the Bilstein/Eibach combination, the standard suspension is just as prepared for repeated onslaught as the brakes. The drawback of the race-ready suspension is the ride is hard on the street, and potholes are best avoided, especially if you happen to have a coffee or can of drink sitting in the cupholder. 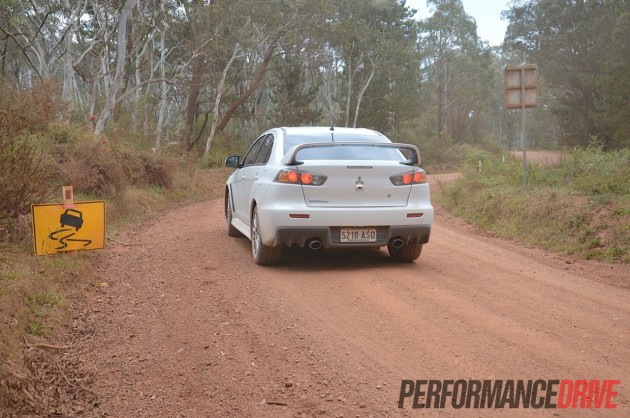 But anyway, you don’t buy a Lancer Evolution for its comfort. During our test we decided it would be fitting to try it out on some dirt roads. Here, the suspension showed it strengths, absorbing hard jolts and diagonal ruts without interrupting the Evo’s dedication.

On the dirt, simply point it and it will shoot. Provided you’re in the right gear with the revs high, you have to be on high alert to make sure you can keep up with it, because chances are, it’s willing to go quicker than you. It’s no wonder it is known as the perfect vehicle for moderate to serious rally competition.

On the tarmac, it remains heavily planted at all times. There’s virtually zero understeer, even if you wrench at the wheel. In a worst case scenario, the rear end will step out. When that happens, it’s simply a matter of applying some throttle and the clever differentials will smoothly straighten it back up. 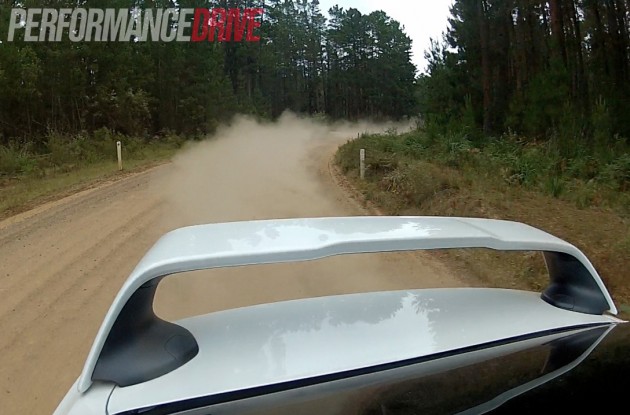 The Evolution X remains one of the, if not the, best race-ready road-legal vehicles currently on the market, especially taking into account its relatively low $56,990 starting price.

It’s been engineered purely for driving, hard driving. It’s a bonus that it has five seats, a boot, and it can be driven on the road as a normal everyday road car. It’s also backed by Mitsubishi’s renowned five-year warranty (or at least until you boost it up to oblivion of course.)

The only negative points in our opinion are the hard suspension, high gearing, which can become tiresome on the highway, and the fuel economy – we could only achieve around 400-450km to a 55-litre tank. The engine note is also far from sporty. 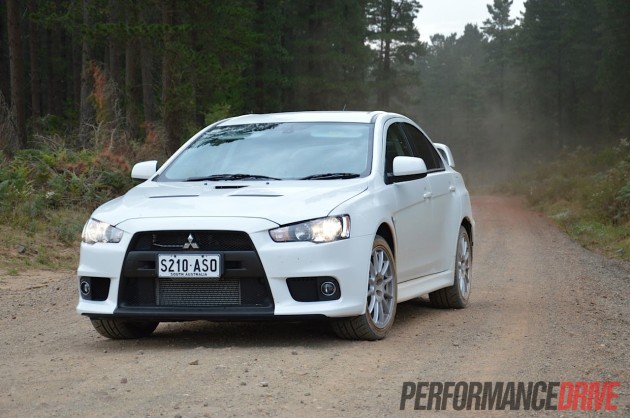 Subaru WRX STI sedan – 2.0-litre turbocharged four-cylinder boxer, 221kW/407Nm – 1515kg – $59,990
The WRX has been the archenemy of the Lancer Evo for the past 20 years. The latest STI is slightly up on power and torque, and it’s lighter in weight. It is a touch more expensive though. Throbbing engine note is more appealing than the Evo’s boring whine, in standard form at least.