Massive, ridiculous, pretentious, overconfident, call it what you will, there is no escaping the 2013 Mercedes-Benz GL 63 AMG’s monumental performance, road presence, and it’s ability to forge through traffic with other motorists practically grovelling out of your way. 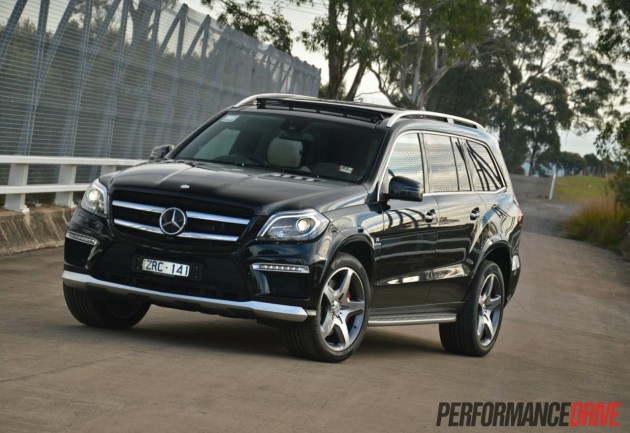 The GL-Class is the biggest SUV Mercedes-Benz offers. And this 63 AMG version is the most powerful SUV currently in the local showroom. It’s also the most expensive SUV and the heaviest passenger vehicle the company makes. At this point, you might be starting to notice a bit of a trend; superabundance.

For the 2013 model, the mighty Merc gets AMG’s latest 5.5-litre twin-turbo V8 producing a supercar-like 410kW of power and a tarmac-buckling 760Nm of torque. It’s matched up to a seven-speed dual-clutch automatic transmission and a constant all-wheel drive system.

Prices start rather north of what you might expect, from an eye-opening $214,900, but remember, this is about decadency and indulging. Guilty just isn’t a word in the GL 63’s vocabulary. 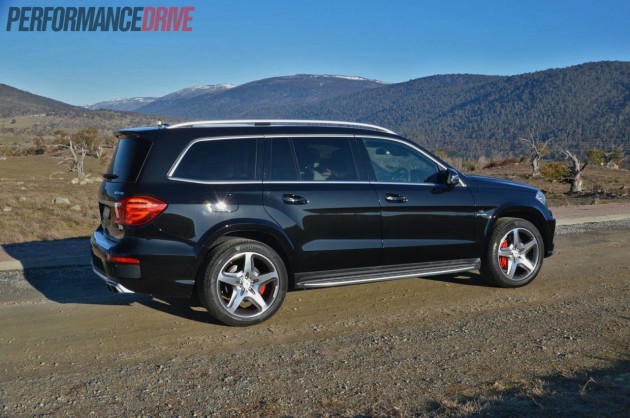 With the white leather upholstery as fitted to this test vehicle, the interior is simply pristine. There’s a real sense of airiness to the cabin, with a clean and open design that’s anything but cluttered. This is mostly thanks to the sheer size of the GL.

Front seat comfort is at the same level as a proper high-end luxury car. There’s sports AMG bucket seats up front which can be adjusted electronically in an almost infinite number of ways. They feature electric headrests for those who can’t be bothered to move them manually, side bolsters that can be shifted up and down and in and out to hug you in laterally, as well as four different massage modes for ongoing pampering pulses onto your back as you drive along. To put the seats into a furniture context; they are likely to be more comfortable than your living room chairs.

In the second row, guests are treated to their own dual-zone climate control with heated seats. As you would expect, legroom and headroom is not an issue in either of the three seats.

Moving back into the third row, the two seats are actually suitable for adults. We jumped in the back for a short drive and found them to be just as comfortable as the rear seats found in a regular mid-size sedan. Legroom is adequate and headroom is well looked after as well. Mercedes-Benz has even gone to the length of fitting air-con vents in the ceiling for the second and third rows to ensure maximum comfort no matter where you are sitting. 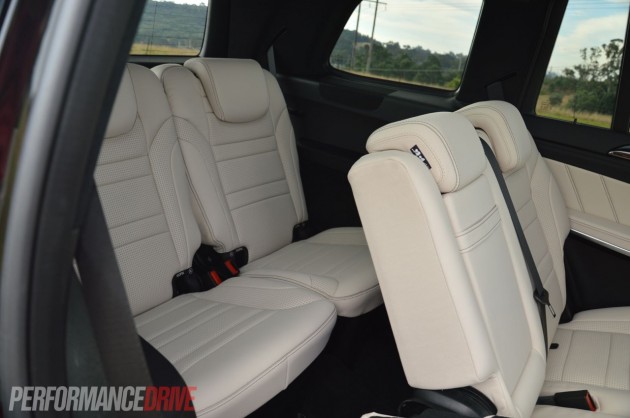 There are a number standard on-board gadgets and electronic conveniences with the flagship GL 63. To name just a few of the highlights that stand out for us, the multimedia LCD interface with its 14-speaker premium stereo is just brillant. The graphics are pin sharp and the usability is fathomable for even the most analogue of users.

The screen is operated via a mouse-type rotary controller which sits right where your hand rests from the centre armrest. Here you can do everything from set up the dual massage seats, adjust the climate, adjust the audio, adjust the vehicle settings, and punch in navigation details for the GPS system. You can also watch digital TV, if the vehicle is stationary.

Another standout feature is the radar-guided cruise control. In some vehicles, this technology still needs some development. In the GL, the sensors do a good job of picking up the difference between a stationary object and a vehicle that’s moving slightly faster than you. This means the system won’t hit the brakes for no good reason. In our opinion, it’s not as advanced or as user-friendly as Volvo’s system, but it is still an impressive, safety-boosting function.

In terms of build quality and fit and finish, all of the dials and readouts are made like precision instruments, with clear yet fine attention to detail. However, some of the plastics used on the instrument cluster seem questionably brittle, almost appearing like they were clipped into place. The rest of the interior feels like it was built to supreme quality and fitment standards.

In the back, there is loads of cargo space. With the third row seats upright, you are presented with more space than what is offered in a current Toyota Corolla hatch. It’s impressive considering there’s room for seven adults up front. Fold the third row down, done electronically via a simple touch of a button (up and down), and you have an enormous flat bed of room to stow anything from skis to a full family’s worth of luggage. 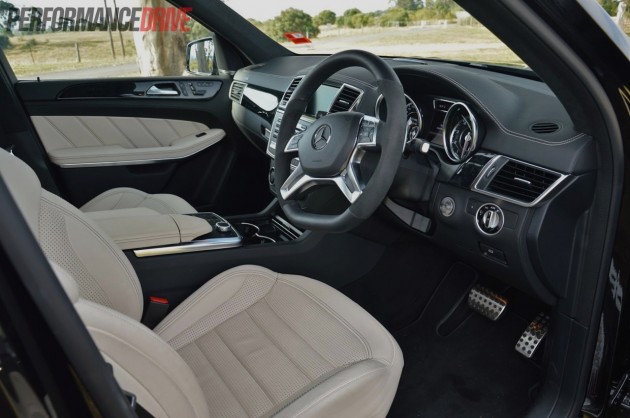 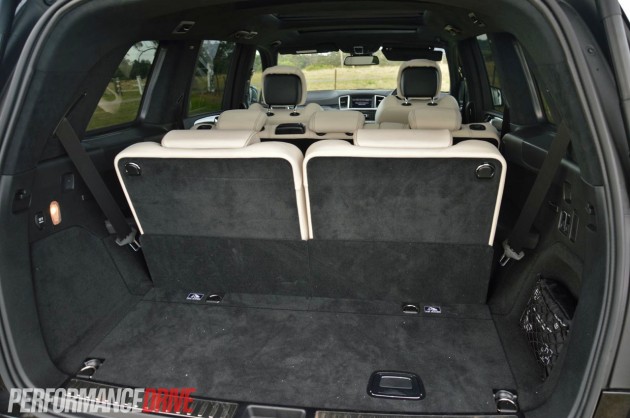 From the moment you fire up the snarling, crackling, and downright sexy V8 engine, the GL 63 AMG exudes all kinds of exciting theatre. The driver is given three driving mode options to choose from, including comfort, sport, and manual, and two damper modes not including the adjustable air suspension.

If you’re the kind of person that’s likely to go straight for the sport modes you’re going to be pleased with the smorgasbord of performance-skewed tricks this beast has up its sleeve. From the exterior, sure, it looks like a fairly stout SUV, but it reveals nothing on the kind of performance that lies beneath.

Nail the throttle off the mark and you’re hit with a monstrous wave of power and torque as the almighty engine heaves the 2.5-tonne land yacht off its feet. The juxtaposition is surreal as it doesn’t seem like a large vehicle like this will accelerate quite so hard.

We timed 0-100km/h in just 5.2 seconds, which is actually just short of the factory-quoted time of 4.9 seconds. Even so, 5.2 seconds has never felt so full on. Due to the sheer mass, the g-force from within the cabin is huge. It really pushes you back in your seat as it rockets towards the horizon. And keeps on rocketing with no sign of lag or letup in torque even as the gears climb. The best word to describe it is relentless, churning through gear after gear like the tyres are on oil.

As for the sound, although it’s a touch muted inside the cabin, it’s a dirty, dirty V8 snarl from the outside. It wisps and crackles like a lion snoring, and roars quickly to its 6500rpm redline. It is, surely, the best-sounding seven-seat vehicle on the market?

Out in the corners, the GL 63 is surprisingly well-mannered. The weight isn’t obvious at first, and the size isn’t overwhelming enough to destroy the confidence that you have in the vehicle.

Probably the only time where the weight is noticeable, and where you may notice the simple laws of physics coming into play, is with the front end suspension. It can lumber a bit twisting into or out of corners with bumps. Under braking the nose does dive considerably too. Stiffer springs would likely remove this character, however, you wouldn’t get the soothingly pleasant ride during times when you’re simply running about in town or along the highway.

Tossing it through corners is where you appreciate the engineering that has gone into making sure such a monster handles like a proper AMG sports car. Body roll is minimal, partly thanks to the sports suspension with Active Ride control, which specifically counters body tip, while the dynamics of the steering and chassis seem to mesh harmoniously. If, for example, you direct the front end quite abruptly into a tight corner, the outfit remains mostly poised and focused. It then rails around the bend with the fluidity of a much smaller sports car.

Disappointingly, the stability control can’t really be switched completely off. Even when you hold the ‘off’ button down until a traction control light signals on the dash, the stability program will step in and try and guide the GL around corners. It’s still quick, but if you’re a spirited driver it can be a little annoying as it won’t allow full power pulling out from the apex of a medium-speed corner.

On the highway, the steering can be a bit touchy, requiring lots of minor adjustments to keep the vehicle on track. We feel it could do with an improved AMG electro-mechanical speed-sensitive arrangement.

Considering its 2560kg weight, the AMG six-piston front brakes do a highly commendable job of pulling the big Benz up time and time again. There is some pedal drop after repeated abuse, but it’s expected on a large SUV which will probably spend more time on family getaways than out on a race circuit. 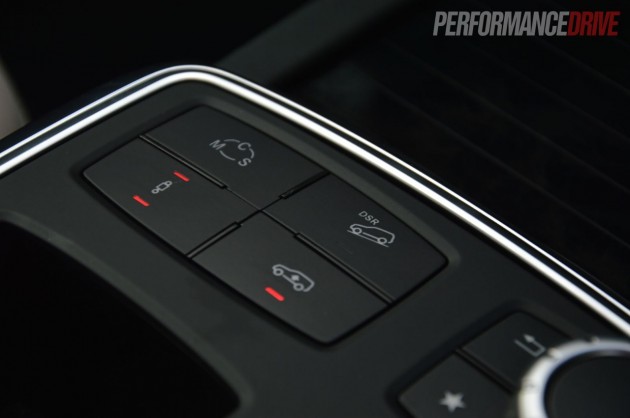 It’s a just massive get-stuffed SUV (you can use your imagination for a better phrase) that sticks its finger up at all of the sissy low-powered eco machines that are out there at the moment.

Even though it’s a thoroughbred AMG model, it’s also a great family vehicle. The huge power reserves mean you can effortlessly chug up steep hills merely nudging 1800rpm, with a full car load. In fact, the transmission, in its comfort mode, will often upchange going up steep hills.

The elephant in the room here is the fuel economy. If you’re forking out this much for a vehicle, you’re probably best to add a few more thousand to the account to keep aside for fuel. The fuel economy is horrendous. Again though, the GL 63 AMG doesn’t know what guilty is. And when you’re driving it, you tend to feel the same way. What a machine.

PROS:
– Monumental performance for a 2580kg SUV, great V8 soundtrack too
– Flat, engaging, and fun handling, and not just for a heavy SUV
– Usable third row seats; comfortable for two adults
– Exceptional luxury and features with lounge room space
– Schwarzenegger road presence; other motorists tend to move out of your way 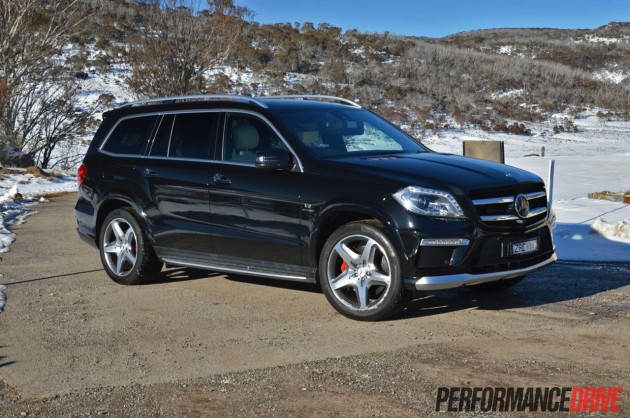