The 2013 Fiat 500 TwinAir is arguably the most exciting and certainly one of the more interesting entry-level micro cars currently on sale. At the heart of it is a two-cylinder turbo engine.

Yes, you read correctly, the noddy ‘bambino’ from Italy now features a two-cylinder under its tiny bonnet, just like the original 500 did back in 1957. Happily, the modern model dispatches quite a lot more than the 9.7kW that was offered during the rock ‘n’ roll years. 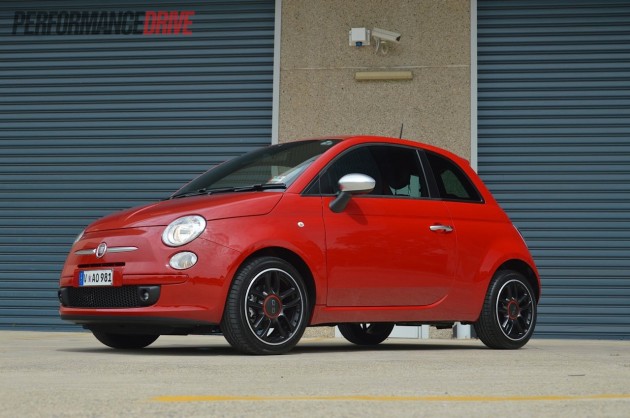 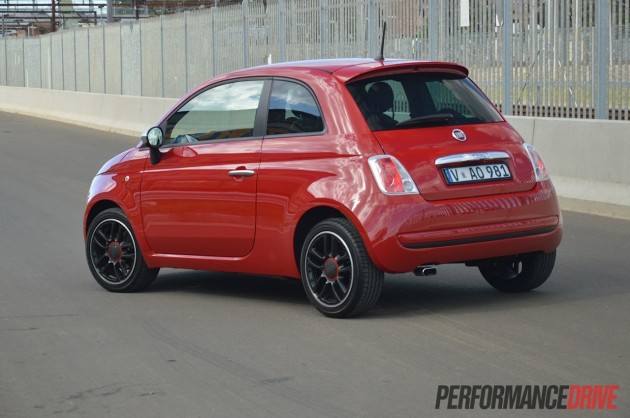 Here at PD, we not only love performance cars, we also like to celebrate interesting, industry-changing cars and cars that evoke some kind of stimulating emotion. The 500 TwinAir is easily one of those cars from the latter.

The TwinAir is the new entry-level Fiat. Even though it’s not a performance car, we think it’s so intriguing, we simply had to show you what this free-spirited puppy dog of the automotive world is all about.

Up front sits an 875cc (0.9L) turbocharged two-cylinder engine, producing a hardly tissue-tearing 63kW of power and 145Nm of torque. The figures might not sound boastful, but that’s not what makes this car interesting. It’s the bubbling sounds it makes and the playful handling that amuses most. More on that below.

Thanks to the recent corporate management changes with Alfa Romeo and Fiat in Australia, prices have been slashed across the board. The price drops are highly welcomed, and for Fiat, it means the 500 is now pushed down into the ‘Light below $25,000’ market segment.

Prices start at just $18,800 for the manual and $20,300 for the auto, which is over $4000 cheaper than the previous pricing. This is a pretty decent price point we think, especially for a genuine European vehicle. 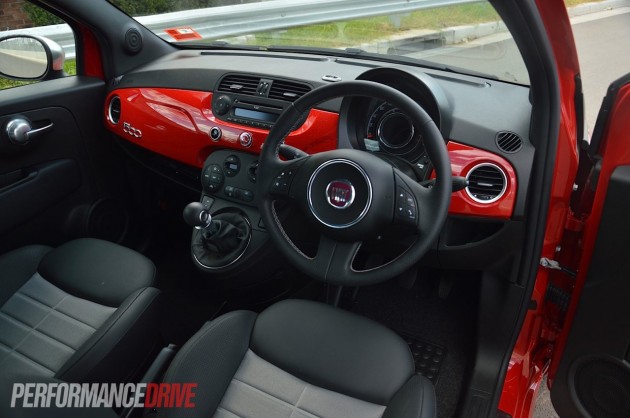 It might surprise you but the build quality inside is quite good, with contrasting stitching on the steering wheel and polished aluminium-like surfaces giving off a respectable, premium feel. There’s no evident rattles or creaks while driving either.

Where the interior is open to a bit of flack is the user layout and friendliness of it all. The dash showcases a mishmash of randomly placed buttons.

For example, the traction control switch is placed right near the rear windscreen demister button, while the front demister is placed in an entirely different circle. It all takes a bit of Where’s Wally glancing around before functionality becomes second nature. 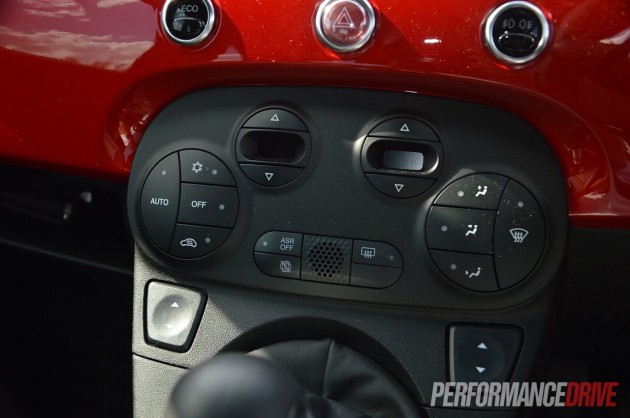 The multimedia audio system is also clunky, requiring multiple button pushes/steps to navigate through to the various options. There’s only one menu button, with arrows to toggle through. It can become frustrating.

Obviously, this kind of layout steps away from the norm, and in doing that, it becomes kind of funky and interesting… once you get used to it anyway. 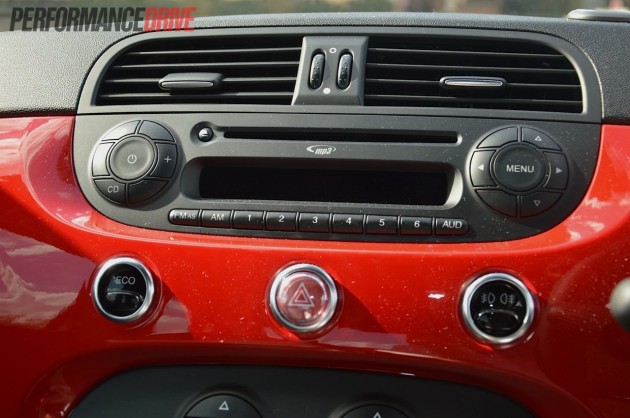 Legroom and particularly headroom is well catered for in the 500, despite the petite external dimensions. Fiat engineers have managed to keep the ceiling high on the inside without losing too much of the low-and-wide fat stance on the outside.

While we did mention the driving position is rather awkward in the high performance Abarth 500, for this entry-level model, it’s the same. However, we feel it’s more excusable here as this isn’t necessarily trying to be a driver’s car or a sports car, like the Abarth.

Rear accommodation is rather restricted. Legroom and headroom is confined, however, it’s not overly cramped compared with the key rivals. For us, it’s the rear seat backs that are the problem. They feel like they lean forward to an almost upright position, making you feel like a bit of a dork – this is a car you want to be driving and not sitting in the back of. 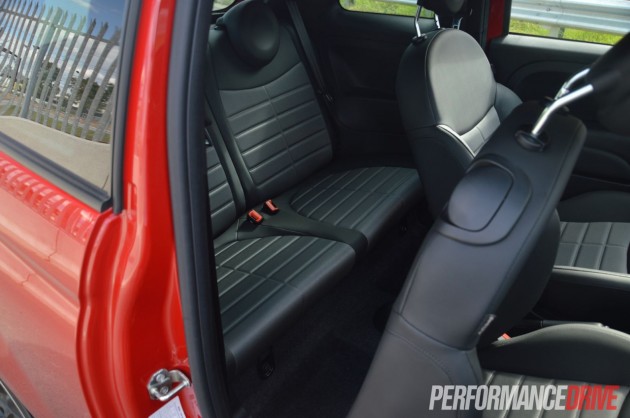 If you’re in the market for this type of vehicle, rear seat space is obviously not something that will be high on your priorities. The 500 will take on board four adult passengers. How big they are and how long they are willing to remain back there is another issue.

In the very back, the 500 offers 185 litres of boot space. This is about on average with its competitors; the MINI Cooper offers 160 litres while the Audi A1 offers 270 litres. If you aren’t lugging around passengers in the back, up to 496 litres is available by flipping down the rear seats. 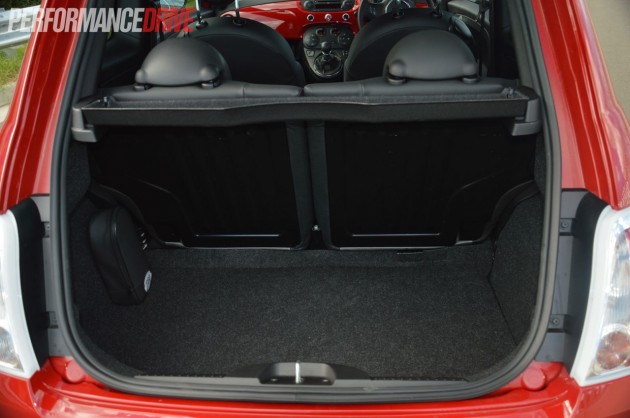 It’s a retro remake remodelled on one of Italy’s most famous non-exotic cars, also called the Fiat 500 (1957-1975). This version stands out in a crowd of humdrum, often conservatively proportioned city cars.

It has a certain spirit about it, a twinkle in its eye, and that’s what makes the 500 so humbling and appealing. To top it off, it’s a nice piece of art, styled by Roberto Giolito, Fiat’s head of design. You can sit and enjoy the car just by looking at it and taking in the attention to detail. You can also reminisce the classic design through the various similarities.

As mentioned, the interior design and layout is cumbersome but cool, with splashes of shiny red panelling and cute round buttons bulging out across the dash. All of this is not ideal in terms of day-to-day living though. There’s no lid on the glove box, for instance, which could present an appealing lure to scumbags that are thinking of breaking in.

Without the glove box lid is one issue, but another is the fact the cabin design hasn’t incorporated any real storage space. There’s a small bucket that swings out next to the gear lever, literally the size of a pocket, only just big enough for your phone. There’s also an exposed cove next to the ignition big enough for a phone and wallet. And that’s all there is. 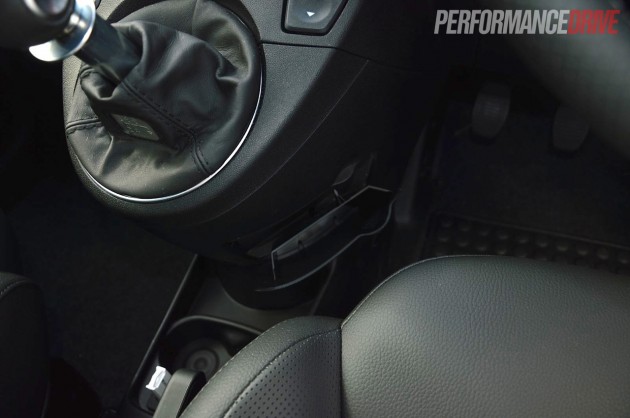 As for safety, the base model TwinAir comes with stability and traction control as standard, as well as nine airbags, remarkably. Australia’s ANCAP has awarded the 500 a full five-star rating.

There’s a great torque window between 3000rpm and the soft 6000rpm redline. If you remain inside this, you’ll thoroughly enjoy the TwinAir’s spirited personality. We timed 0-100km/h in 11.0 seconds.

From take off there is some turbo-lag to contend with, and it can require a big boot-prodding to get off the line during a steep hill-start. From second and third gear, any frown that you might’ve had quickly turns into a boyish grin.

The handling feels bouncy and almost overly springy at times. This is what gives it such a fun a playful character. It might not be well suited to higher speed dippers and bends, but through a twisty mountain road it’s super agile and really exciting. It makes you feel like you’re a bit of a naughty kid flying around on a classic Hill Hoist.

You can always clip an apex too. With the car being so small you have a very good and immediate understanding of where each wheel sits on the road, so you can place it precisely where you want it, and simply dart through corners. Corner speed might not necessarily be quicker than a larger car, however, it feels quick and that’s what makes a car fun. 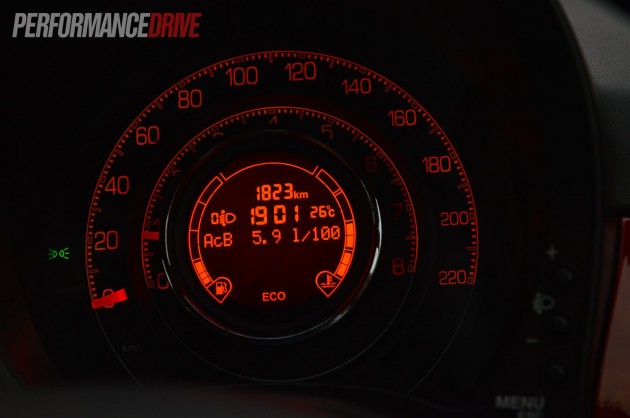 We managed to get the trip computer down as low as 5.9L/100km during our test, and we really tried as well. We’re talking with the ‘Eco’ button engaged and driving mostly on the highway. We even found some trucks to slip-stream behind.

With the Eco mode on, the engine is noticeably more sluggish, especially down low in the rev range. We recommend leaving it off.

It’s not as fuel efficient as it makes out to be. The engine seems like it is boosted heavily by the turbo and in general works pretty hard. To our surprise the redline is capped at 6000rpm. If you, like us, were expected the two-banger to buzz its way out to at least 7500rpm, you might be a tad disappointed. 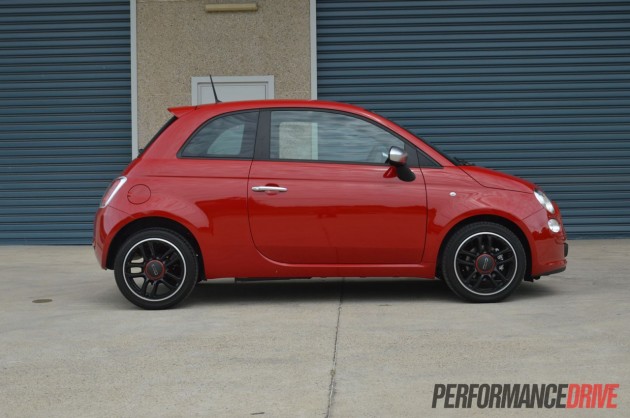 Overall, if you’ve ever driven one of the original Minis from the 1960s, the character and the driving experience is replicated wonderfully right here. And with the Fiat, you get all of the modern conveniences such as air-con, Bluetooth/USB and so on.

While it might not offer the most renowned badge in the business, especially in Australia where the brand is only small and hasn’t been well marketed up until now, there’s no doubt the 500 is a true enthusiasts’ car. It offers an energetic and fun-loving personality that no others can offer this side of $25,000.

The two-cylinder engine won’t win any races off the mark, but it really enjoys to gallop through the rev range. And you’ll enjoy riding it along the way. It sets a decent pace once you’re beyond second gear as well, and surges just fine up long hills.

Would you buy this car? If you’re in the market for a city car and have no interest in cars, you might want to check out the others. If you are, on the other hand, a bit of a car enthusiast, even only slightly, you must take one of these for a test drive. As we said at the beginning, it’s one of the most fun-filled cars in this segment, just before the highly entertaining Abarth 500. 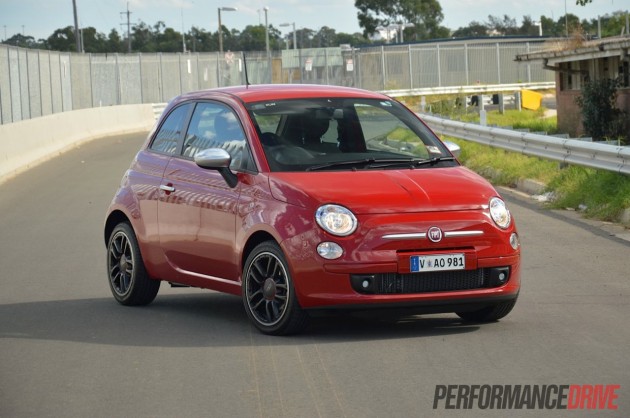