The 2012 Mitsubishi Lancer Evolution X MR might be based on a four year-old car, but it’s still at the top of its game, kicking just about every road car that dares to challenge it for outright grip, engine performance and versatility, and electronic drivetrain smarts. 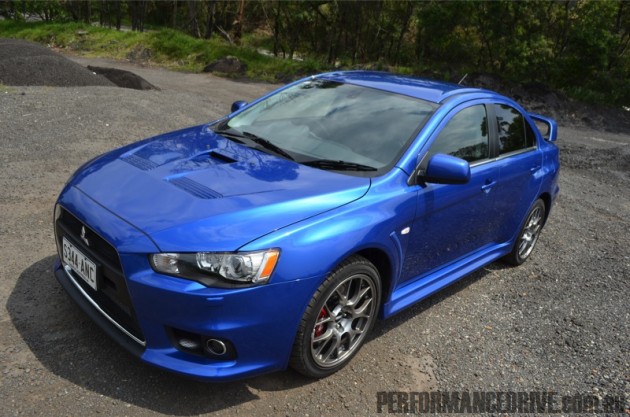 While the 2012 Mitsubishi Lancer Evolution X MR might not have the flair of a raging Lamborghini, or the sex-appeal of a Ferrari, on a bang-for-buck scale, it makes excellent use of advanced technologies such as a Twin Clutch Sport Shift Transmission (TC-SST), a high-tech turbocharged MIVEC 2.0-litre engine, and a Super All Wheel Control System (S-AWC).

Admittedly, the 2012 Mitsubishi Lancer Evolution X MR does have its flaws, such as the ride is very firm for normal driving conditions, a poor turning circle due to the fast steering rack, and less-than-satisfactory fuel consumption. But, it really is a small price to pay for a car that will grip through corners like Tarzan through the trees, and brake hard enough it can hurt your face. All this backed up by comfortable Recaro leather seats inside an air-conditioned cabin. 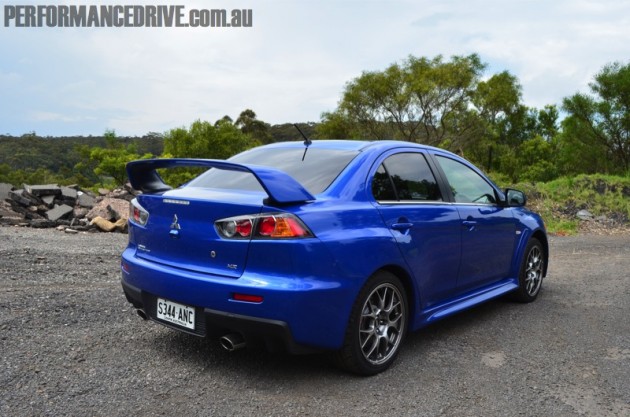 The 217kW turbocharged 2.0-litre 4B11 engine might not seem that much considering the car’s 1635kg mass – the previous Evolution IX weighed only 1470kg. From standstill, the average punter should be able to scoot the 2012 Mitsubishi Lancer Evolution X MR from 0-100km/h in around the mid five-second range. On paper it’s quick, but in the seat, it doesn’t seem all that fast – glances from passengers are often like, ‘is that it?’ But the catch is this, you have to watch the speedometre, then you’ll see that the Evo really does get up and go.

Everything works so linearly in the 2012 Mitsubishi Lancer Evolution X MR that you don’t really feel the shove in the pants that you’re hoping for. In an Evo IX, or Evo VIII, you could really feel the power come on, and every gear you grabbed, sent you sinking into your seat as you watched the speedo climb well above, eh-hem, what’s legal. The 2012 Evo X does things more elegantly.

The 2012 Mitsubishi Lancer Evolution X MR is faster than its predecessor, and much easier to drive fast. The grip levels you can find through bends, twisty roads, even when changing direction eagerly, defies what your mind can understand.

With the TC-SST found in the 2012 Mitsubishi Lancer Evolution X MR, you really have split-second gear shifting at your fingertips. Forget what some critics say about flappy paddles, when you’re halfway through a bend, and you need another gear, one flick, and you’ll have yourself another gear without affecting the car’s rapid acceleration, or stability mid-corner. 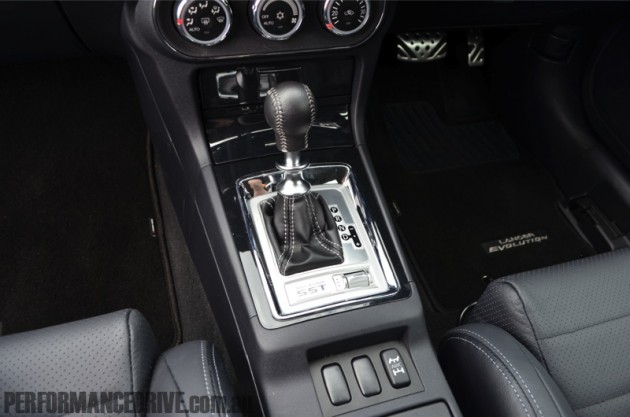 If we may get nerdy for a second, the TC-SST is a dual-clutch transmission, so it uses two input gear shafts; one that holds 1st, 3rd, 5th and Reverse ratios, and the other with 2nd, 4th and 6th. All of these gears are united to an electronically controlled twin wet-clutch system. What this does is allows the next gear to be preloaded in advance, offering blink-fast changes.

There are three console-mounted settings which you can select from with TC-SST; ‘Normal’ is the default setting at engine start and is generally used for day-to-day driving, gear changes are quick with fuel efficiency and smoothness in mind; ‘Sport’ is the relied choice for, wait for it, ‘sporty driving’, providing faster gear changes and improved accelerator response; finally, ‘Super Sport’, this maintains very high revs in self-shifting mode during acceleration and braking – gears are engaged at higher revs while automatic downchanges are made once the revs drop below around 3500rpm, so you can just purely concentrate on the road.

In any pre-selected mode, you can always grab the paddles which initiates manual control. Who needs a manual when you have split second changes at your fingertips? 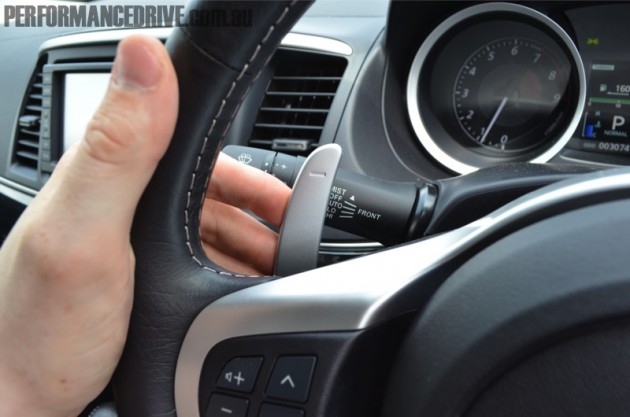 What helps the Evo X MR grip and handle so well is an advanced new technology called S-AWC (Advanced All-Wheel Control). This system is made up of four independent sensors all communicating with each other. The ECU then determines the optimum torque split between the front and rear axles at any given time, and constantly works at providing the best split to get the car around and out of corners as quick as possible.

Another handy piece of mechanical smarts for the Evolution X is called ACD. This breaks up the handling characteristics even further, and gives the ECU with an indication of what style of driving the car needs for the according to the conditions. There’s three modes: tarmac, gravel and snow. In either setting, the system automatically recognises understeer and oversteer and sends power to the wheels with the best traction, keeping in mind of the conditions. It also applies brakes to the appropriate wheels to provide maximum stability.

Stepping further again into the world of computer-aided handling is the Super Active YAW control for the electronic rear differential. Sensors once again gather information, this time on lateral and longitudinal acceleration, steering angle and wheel speeds. It then distributes torque between the rear wheels for best traction and acceleration accordingly. All of this works under the skin though, so there’s no need to worry about it. It’s just good to know there are lots of computers sorting many things out to provide that sheer no-fuss performance.

For those who’re keen, the 2012 Mitsubishi Lancer Evolution X MR has a launch control system. And again, it’s easy to use; it’s not like something you’ll find in a F-18 fighter plane. All you have to do is put the car in Super Sport, turn off ASC (stability control), put one foot on the brake, and push the accelerator into the carpet. The Evo X MR will then dial the revs to 5000rpm. All that’s left for you to do is let go of the brake pedal, and launch off. 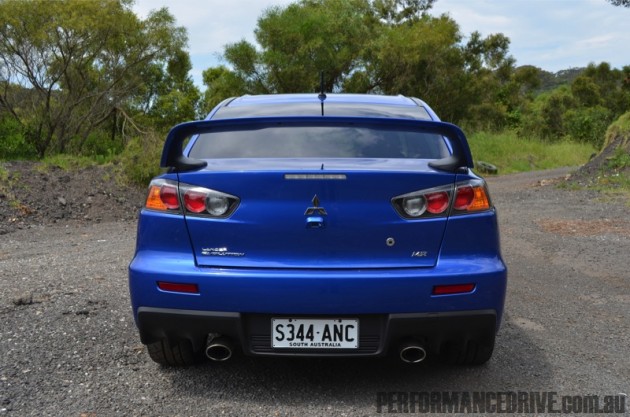 Mitsubishi Lancer Evolutions over the years always seem to have great seating positions, and, a nice firm, leather wheel to grip onto. In the Evo X, the steering wheel sits in your hands very naturally, almost like an extension of your arms, giving pronounced feedback as you barrel through a twisty section of tarmac.

If you’re familiar with all-wheel-drive cars, you’ll know just what it’s like to feel the sensation of g force as you accelerate around a bend. This is something the 2012 Mitsubishi Lancer Evolution X MR accomplishes with great ease. When you use all of the available tools at your disposal i.e. Brembo brakes, 217kW of responsive power, and exceptional grip thanks to a finely tuned chassis and electronics, the car transforms into a thief in the night, railing around every bend in sight.

The 2012 Mitsubishi Lancer Evolution X MR can be a bit tough on the ol’ bottom at times, especially around town. The suspension is made up of some of the biggest names in the business though, with Bilstein shocks (struts up front) and Eibach springs with multi-link at the rear. What we’re getting at it is, while the 2012 Evo X MR might seem a tad stiff and too serious around town, it’s capable of transforming into something extremely up to the task when times gets serious. 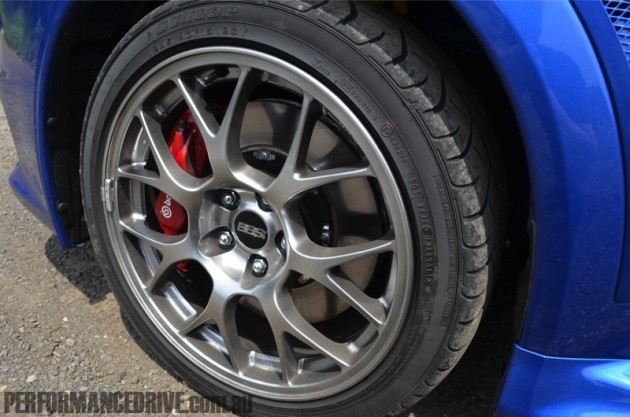 As soon as you hit a strip of road where you can stretch its legs, all you need to do is the road in front of you, and when you need to throw out the anchor. The factory Brembo brakes (the Evolution X MR has 350mm ventilated two-piece rotors up front) really are something to be in awe of. Even after plenty of load in down or uphill conditions, the brakes really hold up well, and provided feedback that a lot of performance cars lack.

The Evo X MR isn’t something you can just slide into; you almost need to position you butt in the right spot, then drop in like a kamikaze pilot, as the front Recaro seats have some serious side bolstering, and side support.

Passengers in the back won’t be cramped, but won’t be treated to copious amounts of knee room due to the huge batwing style Recaros, but all in all, it’s not bad. Boot space is somewhat cramped, partly due to the stereo’s subwoofer. It can become a bit of a problem if you’re planning on heading out for a game of golf, or if you want to carry anything more than a couple of decent-sized luggage bags. 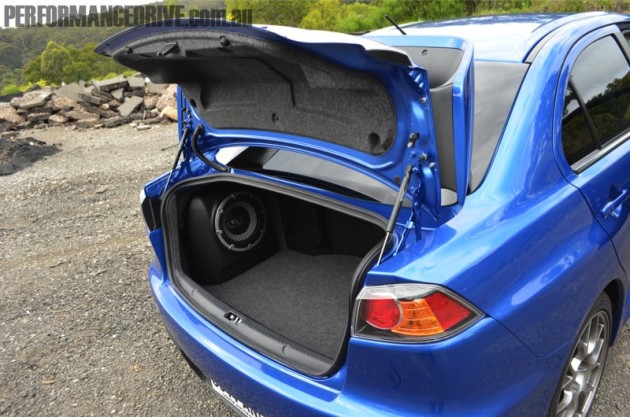 As for the safety, the 2012 Mitsubishi Lancer Evolution X MR is fitted with several airbags, including a driver, front passenger and driver knee airbags, plus side and curtain airbags. These, with ABS and electronic brake distribution, and stability control, and off course, all-wheel drive, provide all the safety you’d expect on a modern car. (ANCAP hasn’t officially crash tested the Evolution X, but it has tested the top-spec ES Lancer sedan and given it the full five stars.)

The frame of the 2012 Mitsubishi Lancer Evolution X MR is what Mitsubishi calls its ‘next-generation RISE rigid frame design’. It combines an energy-absorbing front section with a strong, rigid occupant cell for ample protection, while an aluminium roof, bonnet and front fenders assist in reducing weight and lowering the centre of gravity. All this sound sounds like some like of PR spin, but it’s said to increase torsional rigidity by 40 per cent and flexural rigidity by 60 per cent over the Evolution IX. 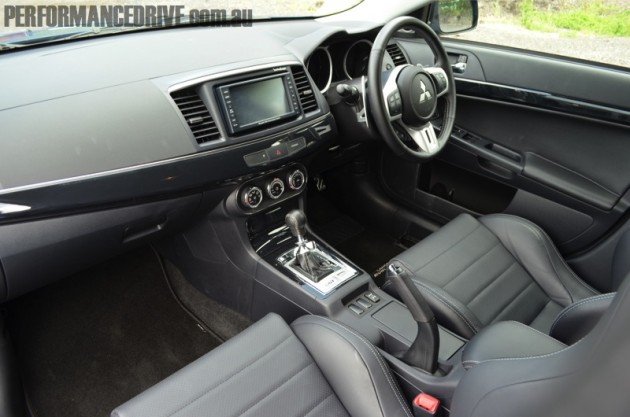 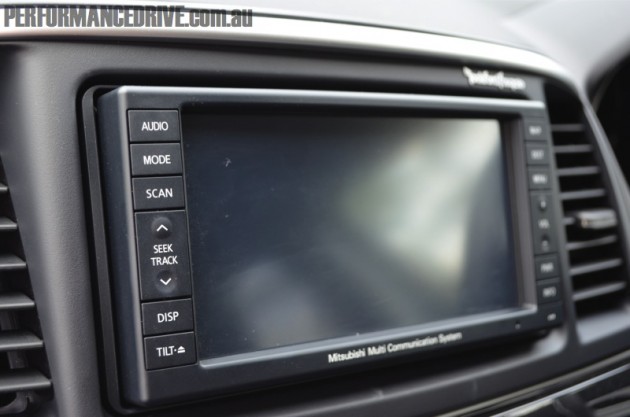 The factory fitted Rockford Fosgate subwoofer does take up some room, as mentioned, but you’ll forgive it when you plug your iPod in and turn up the volume. You can connect your iPod to the MMCS via a cable that located in the glove box, but, strangely, it will not provide charge.

It also has Bluetooth compatibility, but the system can be a bit of a tedious task to pair up, (what system isn’t?) Once you’ve figured it out, you can receive and make calls at the touch of a button through the MMCS; very handy for those who’re keen to stay out of trouble with the boys in blue – it’s a $300-odd fine and three points (in NSW) for talking on your mobile phone nowadays. Not to mention the dangers.

The audio sound the Rockford Fosgate could, potentially, pump out deafening sounds, it’s very impressive for a production car system. It doesn’t sound hollow, or like it needs some more power, all it needs is a good song, and a turn of the volume dial – keep in mind, it is these luxuries that contribute to the 1635kg overall weight. 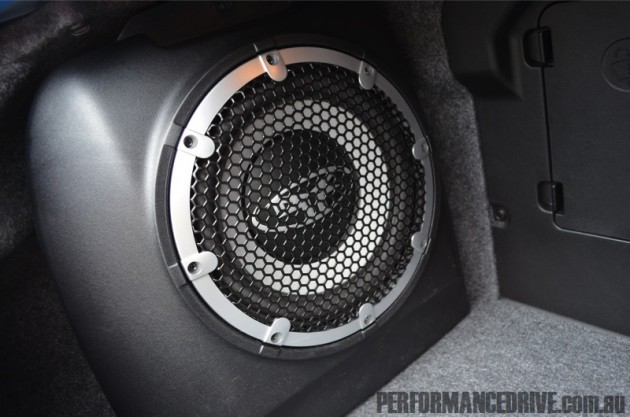 Looking more aftermarket than they do a factory-fitted item, the 18-inch forged-aluminium BBS wheels sit at each corner looking every part the business. The lightweight, aluminium construction of the wheels results in a reduction of unsprung weight, improving handling and making the car more stable.

You may be thinking, ‘well Mitsubishi has had 10 versions to let the Evolution evolve into a real performance car’, but really it’s been on the money from the very beginning. Sure, its main rival, the Subaru Impreza WRX STI is a great car, and feels just as fast, but the Mitsubishi just does it so much easier and it doesn’t always feel like you’re having to push the thing to the limits to get the most out of it.

The 2012 Mitsubishi Lancer Evolution X MR is the perfect meaning of the word, evolution, and it has matured into one of the best performance sedans money can buy. It might also be the last chance to buy a petrol Evo, as there’s talks the next iteration will be powered by a diesel-hybrid.