It’s hotter than the Omega, but it won’t make your wallet go cold like the Calais. The 2012 Holden Commodore Berlina LPG VE Series II is Holden’s answer to ever-increasing petrol prices, potentially saving you up to 50 per cent of your hard-earned at the petrol pumps. 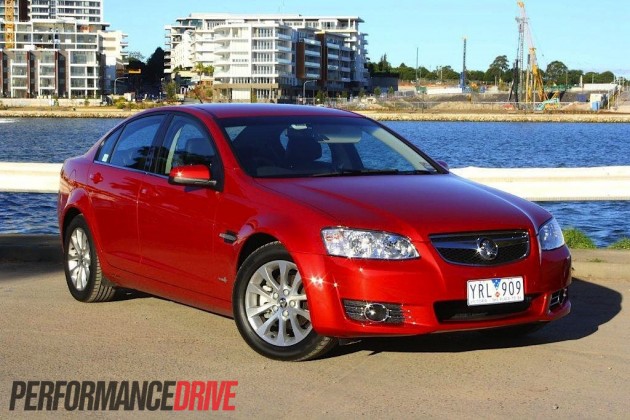 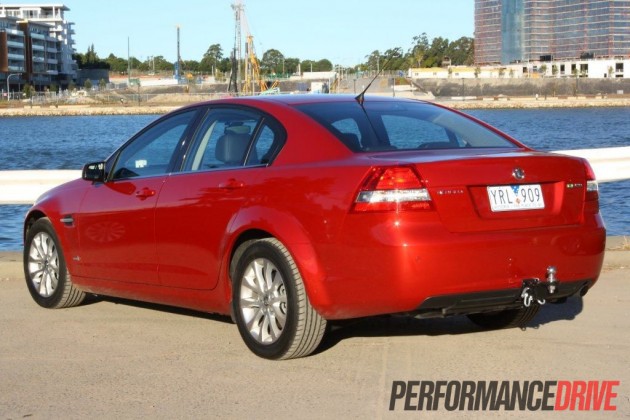 For years Australians have appreciated the Berlina as a respectable and slightly special variant of the Commodore family. It’s not the hottest version out there but it does come with a swag of neat touches that make it that little bit more interesting than the bread-and-butter base model Omega. With the factory LPG system, it’s even more appealing.

The Berlina is much like the girl next door. She might not be on the cover of Zoo Weekly anytime soon, but she comes ego-free, she isn’t a gold digger, and she’s the perfect one to carry your kids. Put simply, the VE II Berlina LPG has everything you’d want in a family car. 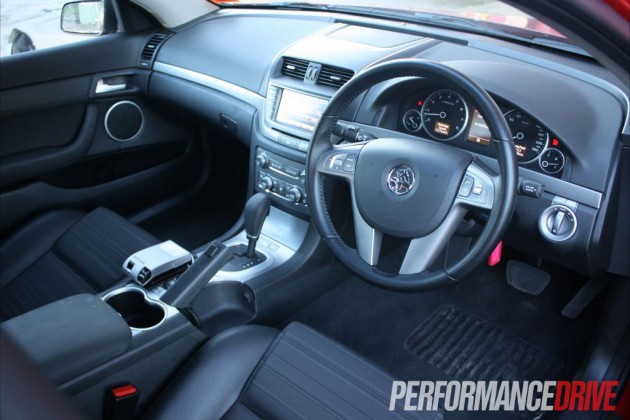 These days the entire Commodore range is well equipped inside, with all of the features you took for in a modern-day vehicle. Features such as a colour touch-screen, steering wheel stereo controls, Bluetooth and iPod connectivity, cruise control, and dual-zone climate control all as standard. Adding satellite navigation costs an extra $990.

So what does the Berlina get that the Omega doesn’t? To give it a smarter and somehow more intelligent look, the Berlina comes with 17-inch alloy wheels, chrome highlights, fog lamps, a leather wrapped steering wheel, rear park assist, and semi-bolstered seats. You can also opt for ‘Onyx’ leather which is a $2,500 option (as tested) to spruce up the in-car environment.

The seats have about as much lateral support as a park bench, but they’ll have any bum under the Australian sun feeling just fine on long journeys. If you want to put your passengers to sleep, you’ll do it much easier in the Berlina than any of the sports models. 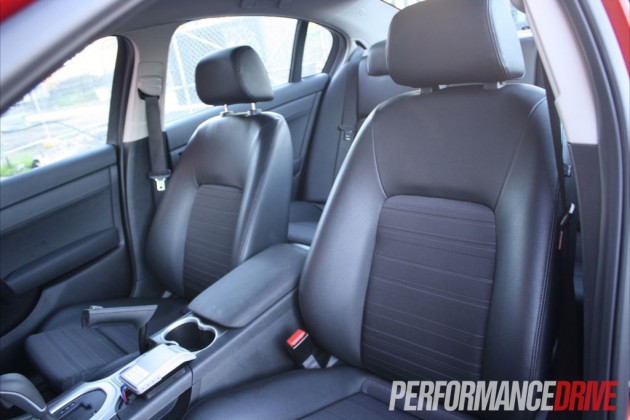 Under the bonnet, the Berlina LPG, as the name suggests, features Holden’s state of the art liquefied petroleum gas system. It has been developed to significantly reduce the severity of the costly annoyance of paying for fuel.

When you hear someone mention LPG in Australia, we usually think of two things: barbeques and taxis. But Holden says its “vapour injection” is more efficient and convenient than the liquid injected dual-fuel models that have been around for yonks.

The Holden Berlina LPG is a dedicated model, and runs on LPG only. A bonus upshot of this is the tank takes the place of where the petrol tank would be, so boot space isn’t compromised. 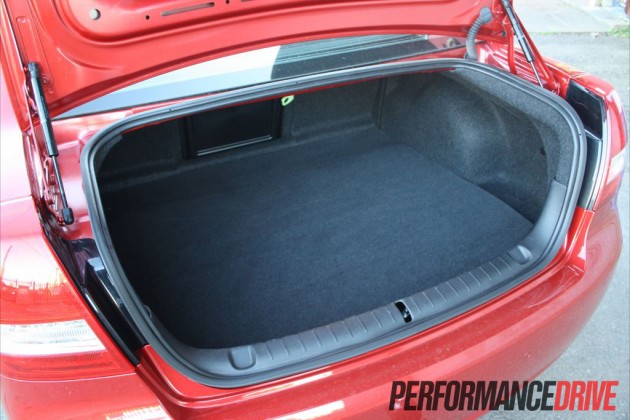 The LPG 3.6-litre V6 engine produces 180kW of power and 320Nm of torque. It’s certainly nothing to brag about, but it’s still a decent shove in the back when you give it a bootfull. Besides, this car isn’t made for racing, we’ll get more into why further below.

With the VE Commodore being the top selling car in Australia for four years (prior to the Mazda3 taking over last year), it’s hard to be an individual and stand out in one; there’s so many around. The Berlina has plenty of touches to show a little more class than the Omego though. A $500 metallic paint job in one of Holden’s new Series II hues adds some extra appeal, helping the car stand out as one of the very latest models.

When it comes to safety, it comes second nature to the Commodore these days. A five-star ANCAP safety rating comes thanks to airbags up front, on the side and curtain, as well as pillars as thick as Popeye’s forearm. Those thick pillars do hamper vision slightly, especially checking back at your blind spot through the C-pillar. 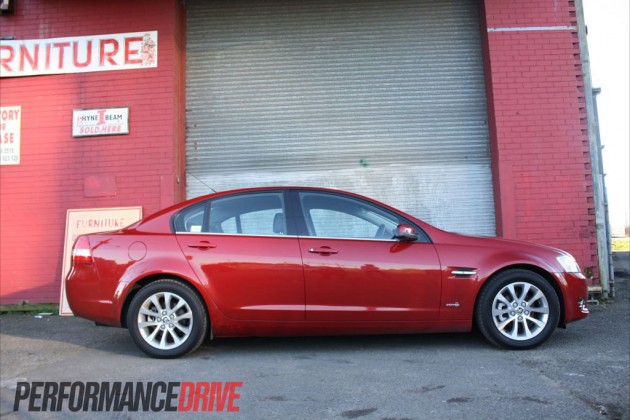 The Holden Berlina is definitely a car that you could live with on your daily A-to-B trips, as well as during getaways to ‘C’ on the weekend. The interior is large and accommodating with big relaxing seats, while that V6 power provides more than reasonable levels of acceleration and highway cruising capabilities.

Driving along twisty sections of road with a mildly sporty attitude, it does become apparent that the front and rear suspension has been set up with softness and comfortableness in mind. The eco-oriented tyres tend to twist and flex as well. In other words, for us performance enthusiasts, the Berlina isn’t athletic enough to be admitted into the sporty sedan category. For that, you need the SV6 or the V8 SS. 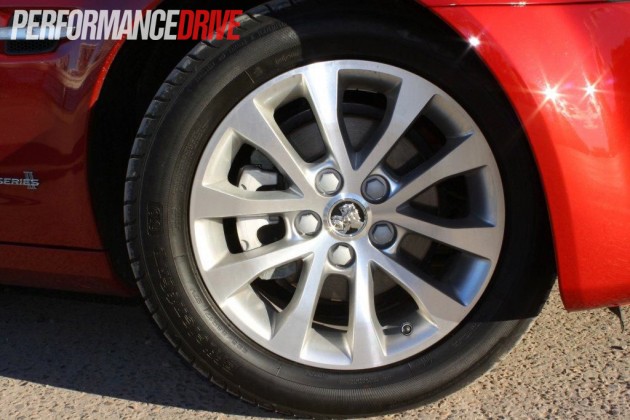 In cruise mode is where it is most happy, riding very nicely absorbing most bumps and rough surfaces well.

The LPG 3.6-litre V6 loves to rev hard. It won’t break any speed records, however, mated with the six-speed ‘box it gets away from a standing start with plenty of urgency. You’ll definitely hear it too.

One of the big differences between the petrol and LPG models apart from the obvious is the difference in sound. The LPG starting up sounds like you’re firing a gun in a Star Wars movie, with several punches from the starter motor needed before finally kicking over. The sound as the engine revolves is almost like the cast-iron V6 engines of old Commodores. It has a real angry raw note from inside the cabin rather than the smooth hum you get from the SIDI V6. 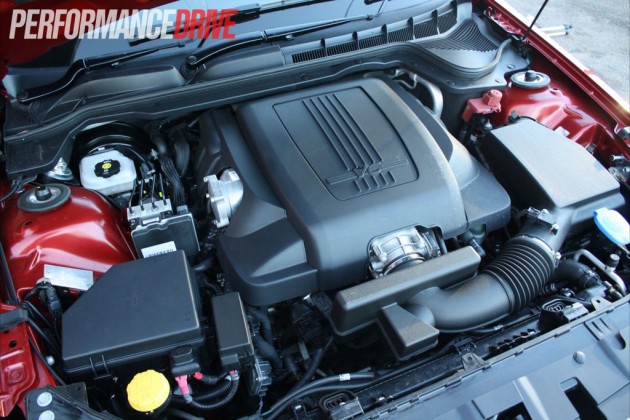 It doesn’t sound pretty, but the best sound you’ll get from the LPG engine is the “ca-ching” of the cash register when you’re at the servo. You’ll get change from a 50 when you fill up, and it’ll last for a good 500km too. You can add another couple of hundred kilometres to its range if you do lots of highway driving.

Officially, the Berlina LPG offers a combined cycle consumption rating of 11.8L/100km. Compared with the 3.0-litre petrol V6 model’s combined rating of 8.9/100km, the LPG does consume around 32 per cent more. With LPG currently around 2.5 times cheaper than 91 RON petrol though, there’s big savings to be had.

Over a distance of 1000km, for example, in the petrol version it would require 89 litres (theoretically). With an average petrol price (NSW) of $1.40 per litre, it would cost you $124.60. In the Berlina LPG, it would need 118 litres. At an average cost of 55 cents per litre, it would only cost you $64.90 to do the same 1000km. That’s a potential saving of around 50 per cent. Plus, you’re taking one for the team by not burning up the dead dinosaur reserves.

We reckon there is a big future in Australia for LPG and expect a boom as oil prices increase over the next decade.

For the enthusiastic driver, the Berlina will be boring. If you want a sedan for similar money that’s fun, look to the SV6 or (if you have no motoring religion) the Ford Falcon XR6.

For those who want comfort on a budget, there are few cars on the market with four doors and three golf-bags worth of boot space that offer this kind of motoring for under $50,000. Even fewer that can run as cheaply as a Toyota Prius. It’s a great step by Holden that could help secure a future for the Aussie icon. 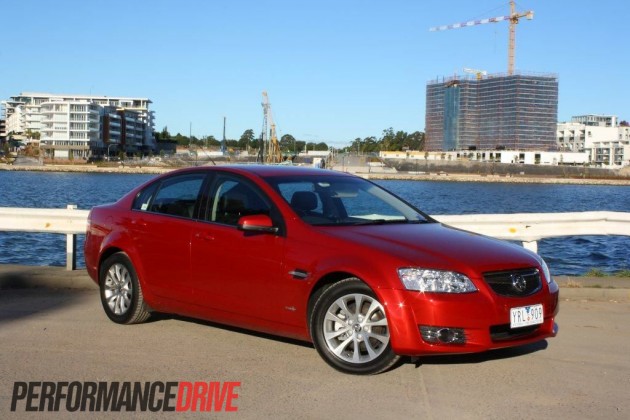 2012 Toyota Aurion Prodigy – 3.5L V6, 200kW/336Nm – 1550kg – $41,490
The Toyota offers plenty for your dollar in this price range and really performs well in a drag race with its Holden and Ford rivals. The front-drive layout can be a weakness in the handling stakes, but that’s not really what this segment is about.

Josh Barnett specialises in motorsport and road testing. His passion for cars is long and wide, and his experience is just as impressive. Josh's work has appeared in titles such as Street Commodores and Fox Sports.