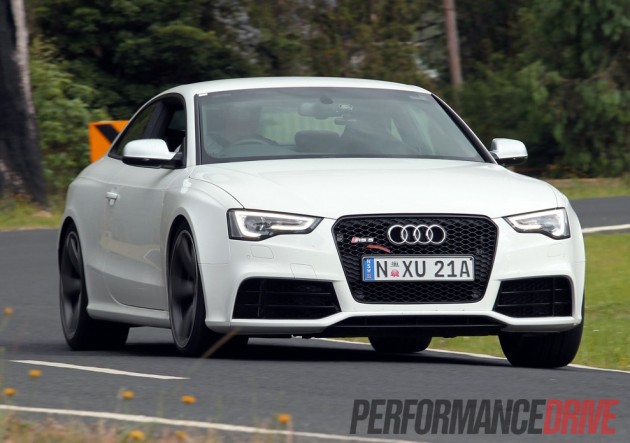 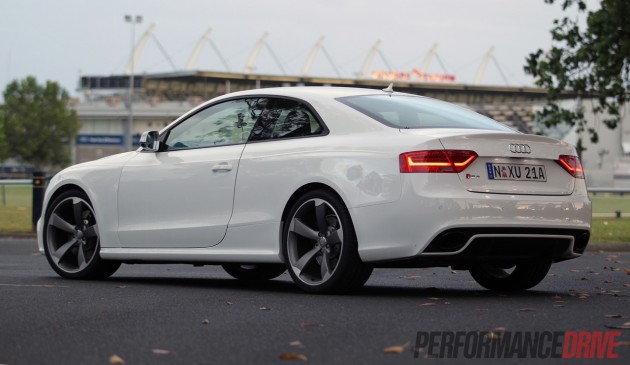 Built on the A5 platform, the RS 5 goes head to head against the likes of the BMW M3 Coupe and the Mercedes-Benz C63 AMG Coupe, both of which are far from unaccomplished performance cars, making the job even harder.

Powered by a high-revving 4.2-litre V8 producing 331kW and 430Nm, the RS 5 defies physics courtesy of an all-wheel-drive system as opposed to the rear-wheel-driven M3 and C63 AMG.

The RS 5 sits in between the M3 Coupe and C63 AMG Coupe in terms of pricing, with the former being the most expensive. Prices for the Audi start at $161,140, excluding on-roads, however, it’s easy to spend upward of $20,000 on options.

The RS 5 uses Audi’s latest quattro generation VI all-wheel drive system, which incorporates an Audi-developed crown gear centre differential. The diff can send up to 70 per cent of engine torque to the front wheels or up to 85 per cent to the rear wheels, depending on the conditions and demands.

The crown gear manages torque transitions instantly with no lag, so the car’s electronic computer can act with instant precision at the sign of any traction loss on any axle. The differential is supported further by an electronic front and rear differential lock that takes advantage of the ESP to reign in any wheel spin that inhibits mid-corner traction.

Of course, this magical all-wheel-drive system comes at a cost with the RS 5 weighing in at 1715kg (around 115kg more than the M3 Coupe and 49kg less than the C63 AMG Coupe). Luckily, the weight isn’t felt during cornering and doesn’t interrupt the natural feel of the car (more on that further down). 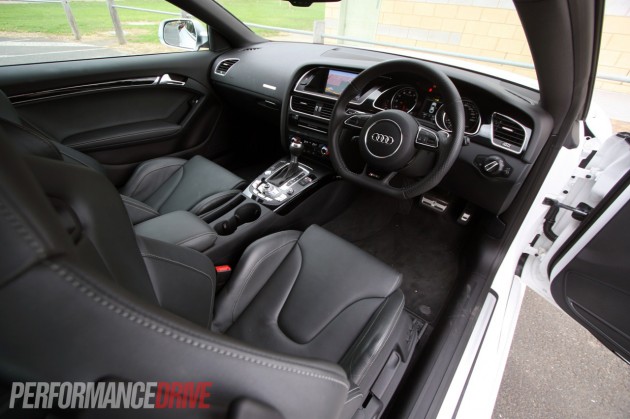 Inside the cabin, the first thing that caught our eye was the optional bucket seats fitted to the test vehicle. Despite carrying a $6300 price tag, the RS bucket seats with electronically adjustable bolsters are as close as you will get to a racing car seat in a street legal vehicle.

RS models come with a ripping sports steering wheel, which has a shaved bottom that accommodates the hands perfectly. Dynamic paddle shifters are mounted to the rear of the steering wheel and can be activated at any point while driving. The steering wheel also features controls for the audio, voice recognition and satellite navigation.

If you are into music, you will be sorely disappointed with the standard sound system. For a $161,400 car, the standard system offers limited bass and poor low-range clarity. A Bang and Olufsen unit can be optioned for an additional $1700 – a no brainer if you enjoy listening to music while driving. 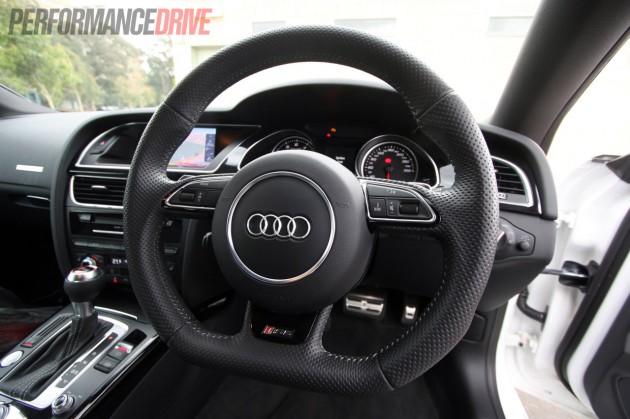 Another disappointment is the lack of a reversing camera. Again, for a $161,400 car, this type of thing is considered run of the mill and barely an optional accessory in other less expansive market segments. In place of the reversing camera is forward and reverse parking sensors.

In comparison with the M3 Coupe and C63 AMG Coupe, the RS 5’s interior is beginning to look dated. The Audi A5 was launched in 2007, making the interior over five years old and in desperate need of an update.

Front leg and headroom is exceptional. Rear legroom with the optional bucket seats is very limited due to the added girth of the seat backs, making the RS 5 an excellent excuse for not being the designated driver. 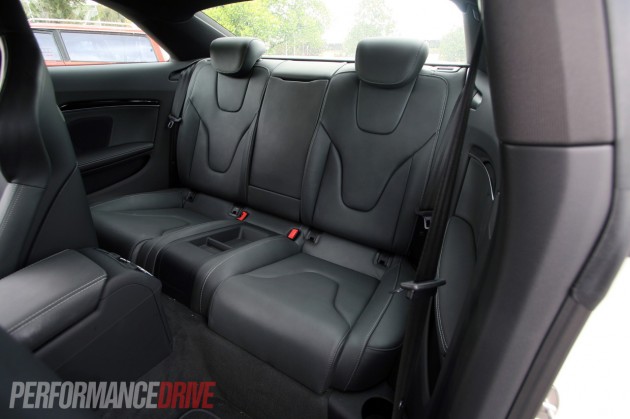 You know you have spotted an Audi enthusiast when they compliment you on your RS 5. That’s because the RS 5 is fairly understated in comparison to other performance cars. The M3 has bonnet bulges and flared arches, while the C63 AMG looks like it’s about to give birth to an A Class via the quad-outlet exhaust pipes.

Is that a bad thing? Not really, in our opinion. One of the key attractions to the RS 5 is its understated appearance; it’s a discreet performance car in other words. Wiping the smile off almost anything from the traffic lights or the race track becomes an intoxicating experience each and every time. Not to mention the ability to switch between grand tourer and race car with the push of a button (again, more on that further down).

The front end features two gaping holes instead of fog lights that hide a radiator and brake ducts on each side. The latest RS 5 iteration also has a new LED daytime running light (DRL) design that helps distinguish this latest revision from the previous one. There’s also two small RS 5 badges on the front and rear, in addition to trademark oval exhausts that hide quad outlets. 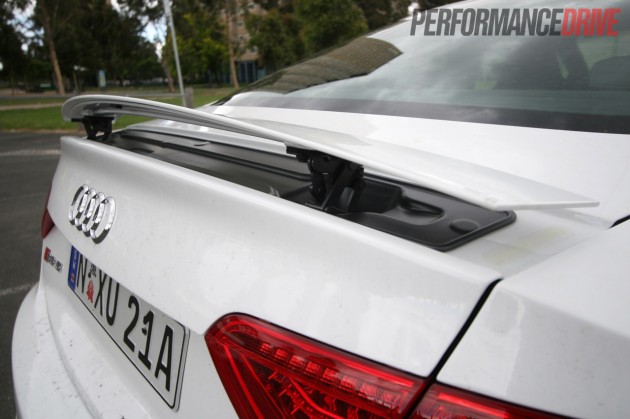 From the outside, the RS 5 is certainly a gorgeous looking car and arguably better looking than the M3 and C63 AMG, especially in the Ibis White solid paint colour (as tested).

While the Audi A5 hasn’t been crash tested by Australia’s ANCAP or the EuroNCAP, the A4 has been tested (which the A5 is largely based on). The Audi A4 has scored a full five-star safety rating during testing.

When you think of V8 performance cars, you don’t often hear about ones that will rev out to 8250rpm. The 4.2-litre V8 under the bonnet is the exception to the rule. The small-capacity V8 is directly injected and naturally aspirated to produce 331kW at a singing 8250rpm, and 430Nm of torque between 4,000rpm and 6,000rpm. The result of such impressive figures is a launch-control-enabled 0-100km/h time of just 4.5-seconds.

At the helm of the RS 5, the driver instantly becomes accustom to the feel at the wheel and the nuances of the seven-speed dual-clutch automatic gearbox. The Audi Drive Select system allows the driver to select one of three driving modes; Comfort, Auto and Dynamic (or the custom Individual mode).

In Comfort mode, gear changes are soft, the exhaust note is subdued and if you were none the wiser it would be easy to assume you were behind the wheel of an entry level A5. The Comfort mode is perfect for chewing up highway kays, even while being hugged by those excellent RS bucket seats.

Hit the Audi Drive Select button to switch Dynamic mode on and the engine blips the throttle after opening two more exhaust valves, selecting the gearbox Sport mode and tightening the steering. This instant response awakens the sleeping giant under the bonnet and reminds you of the potency on tap.

With the two extra exhaust valves open, the RS 5 sounds very menacing. The throaty V8 can be heard from miles away and emits gunshot sounds when you shift up at high rpms. The untrained ear would assume a V8 Supercar was coming around the next bend, as opposed to a German sports car.

During our test, we chose a perfect twisty mountain road to stretch the RS 5’s legs, and the grin it left was from ear to ear. 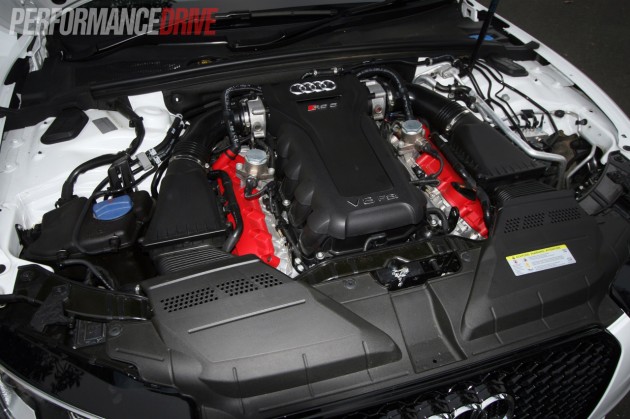 When you attack a tight corner with pace, the first thing you look for is the brakes. The RS 5’s massive 365mm front brakes work in unison with the 324mm rear brakes to bring relentless stopping power. The pedal feels perfect under-foot and brings the RS 5 to a halt each time, regardless of the torture they have just endured.

For those who plan to spend more time on the track, carbon ceramic brakes can be optioned for an additional $14,500. We’ve tested these previously with an Audi product, and they’re the never ending Willy Wonka gobstoppers of the braking world.

Right after slowing for the corner and lobbing the RS 5 toward the apex, you get a sense for the accuracy and poise of the steering. The rack is tight and communicates everything on the road through to the driver. This is in addition to the chassis, which sits almost perfectly flat – even at full tilt.

Finally, the all-wheel-drive system really comes into play when you throttle out of a corner. The under-skirt trickery of the quattro system is seamless and perfectly accurate. The speed that you can carry out of a corner is totally incredible. To describe it as cornering like it’s on rails would be a gross understatement.

Cornering accuracy is partly due to the amount of rubber in contact with the road too. The tyres measure 265mm wide on all corners and are mated to 19-inch wheels. Optional 20-inch alloy wheels with 275mm rubber are available as a $4100 option (as tested). 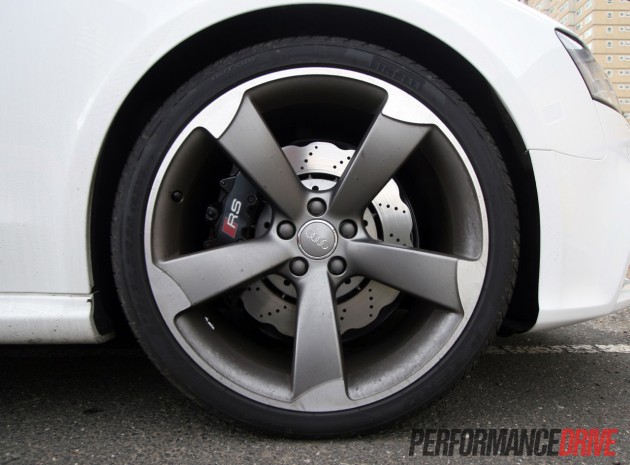 If there was one thing we would change about the RS 5, it would be the tyres. The test vehicle was fitted with Pirelli PZero Rosso treads that felt a little underwhelming. Previous Audi products tested with Michelin Pilot Super Sport tyres have been able to make the most of the all-wheel-drive package a lot better, in our opinion. But, expect to pay around $800 per corner for the privilege.

As one of Audi’s fastest coupes, it’s needless to say the Audi RS 5 is the definition of performance perfection. The high-revving V8 works wonders with the new crown gear centre differential to extract the most out of the package.

But, is it better than a BMW M3 Coupe or a Mercedes-Benz C63 AMG? That’s the million dollar question.

Put it this way, if you want hoonish thrills behind the wheel, you would put your money on a C63 AMG any day of the week. If you’re after a car that also delivers levels of hoonish thrills, but also gets the job done on a track with the utmost of poise, the M3 Coupe is your car.

If, on the other hand, you’re after a car that can transport your mother-in-law, whip anything this side of a Ferrari at the traffic lights, and elegantly take on a mountain road, you simply cannot look past the Audi RS 5. I’ll have mine in red with the Bang and Olufsen sound system, thanks. 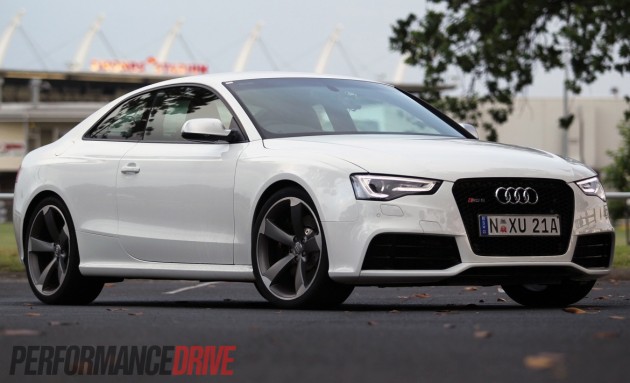 Paul is a contributing road tester at PerformanceDrive. He is an expert in supercars and luxury cars. From Melbourne, Paul's journalism experience is vast, covering not only the auto industry but also travel and tourism. He test drives over 70 new vehicles every year, with reviews appearing in prominent magazines, newspapers, and online. He is one of the founding team members at CarAdvice.com.au.